Sage Grouse Will Not Require Protection Under Endangered Species Act

Secretary of the Interior Sally Jewell announces yesterday that greater sage-grouse will not require protection under the Endangered Species Act.... 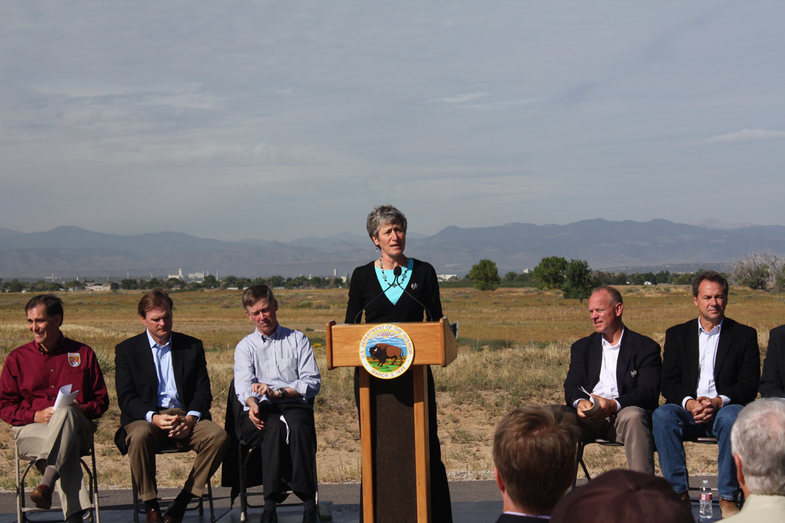 With the backdrop of the Rocky Mountains in the distance and flanked by a cadre of Western ranchers and governors, Secretary of the Interior Sally Jewell announced yesterday that the greater sage-grouse is “not warranted” for listing under the Endangered Species Act. After years of collaborative conservation—and not a little bit of political wrangling—the decision to not burden the species with regulatory red tape is seen by most as a solid win for conservation.

“What we’ve seen today is thoughtful law galvanizing individuals to not only save a species, but also the entire landscape and heritage of the American West,” noted Jewell in her remarks today at the Rocky Mountain Arsenal National Wildlife Refuge outside Denver. “This epic, science-based, landscape-level collaboration is the future of conservation. It won’t be as complicated next time around because we’ve paved the way with this. I hope you all join me in being extraordinarily proud to be part of this landmark occasion, and convinced that we built relationships and trust together that will carry us forward and chart a path for those that succeed us in these roles.”

Particularly notable in the announcement was the broad spectrum of participation from both Republican and Democrat governors, ranchers and environmentalists, and federal and state wildlife management agencies. The foundation for the success was built in part on the collaborative efforts led by the Natural Resource Conservation Service’s Sage Grouse Initiative, as much as through revised resource and land use management plans led by the Bureau of Land Management and the U.S. Forest Service. State agencies through the Western Association of Fish and Wildlife Agencies worked together to craft and implement a conservation strategy that is being implemented in all 11 of the states with sage grouse populations. These unique public-private conservation efforts have been responsible for the restoration of sagebrush landscapes across the West, collaboration with ranchers, and negotiation with the energy industry.

The debate on sage grouse conservation started over a dozen years ago, and just ten years ago a different administration also granted the bird a “not warranted” status. However, through legal wrangling and a lapse in follow-up conservation efforts, the bird’s status once again landed in question in 2010. That’s when the various agencies and their partners rolled up their sleeves to get to work on significantly reducing the risk to sage grouse in their priority areas of conservation.

Since that time, the investments in private-land conservation through the Sage Grouse Initiative have resulted in over 1,100 ranches engaging in conservation activities impacting 4.4 million acres of land. Federal land management agencies rewrote management plans that outline specific areas where development can occur—and specific areas that are just too important for sage grouse and must be avoided.

It is because of those efforts on private lands, and the work of the federal agencies, that the U.S. Fish and Wildlife Service determined the bird to not be at risk of extinction.

“In the end, I was given a unanimous recommendation,” said Dan Ashe, Director of the USFWS. “Ten project field office supervisors, three assistant regional directors, three regional directors, an assistant director and two deputy directors—all career employees and public servants, between them with probably more than 500 years of collective professional experience, all recommending unanimously. We have shown that through great leadership and great epic partnership we can come together and we can cooperate in the best interests of the West, and the best interests of our nation.”

Democratic Governor John Hickenlooper of Colorado and Republican Governor Matt Mead of Wyoming, who co-chair the Western Governors Association’s sage grouse working group, lauded the decision. According to Mead, strategies in Wyoming that have been implemented to protect the core areas of sage grouse resulted in a 66 percent increase in the average number of sage-grouse males on leks (courtship display areas) this past year. Similar improvements have been made in other western states.

“This is good news for the bird, but it’s also good for responsible development, it’s good for property rights for our farmers and ranchers,” said Montana Governor Steve Bullock. “Today’s decision is a recognition that when folks put aside their differences and focus on solutions, we can truly tackle the biggest and most complex issues. Through this effort, Democrats and Republicans, conservationists, resource developers, sportsmen, and private landowners came to the table, they expressed their concerns and they abandoned hard lines. Everyone gave a little bit, and no one got everything they wanted. We all recognized it was in everyone’s best interest to ensure continued state management of this iconic bird. At a time when conflict, rigid ideology and gridlock seem to dominate political discourse, today should serve as a reminder of how government is supposed to work.”

The challenge ahead, to ensure that sage grouse populations don’t drop off once again, will be in the implementation of the plans that have been set in place at the state and federal level. As Secretary Jewell noted, this is just the end of the beginning, and if the plans don’t move forward and everyone does not stay at the table, we’ll be back in the same place in five more years.

But yesterday was a good day for conservation—the result of collaborative work of people who have worked hard to protect the West’s great sagebrush landscapes for this great bird.