Illustration by Mark Matcho David E. Petzal answers your questions about guns, shooting, hunting, and life. What is the worst... 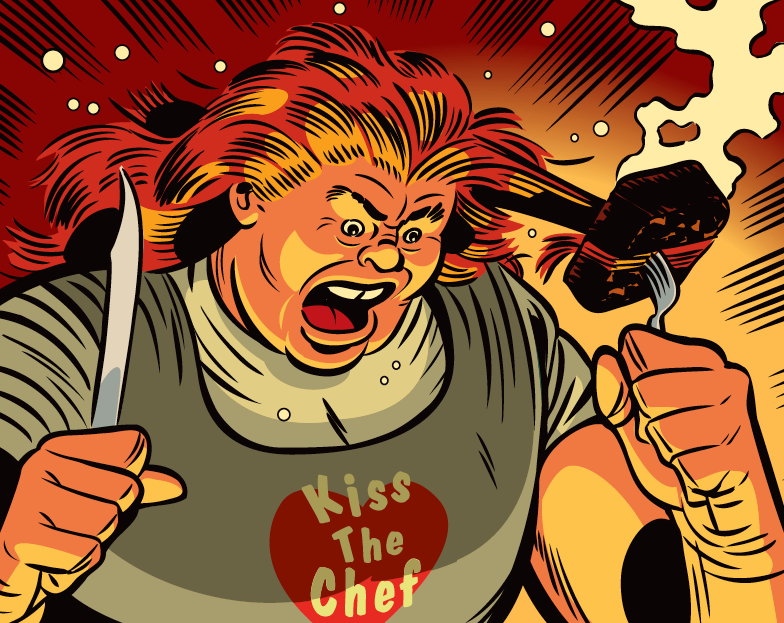 What is the worst thing you’ve ever eaten at a hunting camp?
—Kent Collins, Sacramento, Calif.
A: It was an antelope chop that was burnt to a cinder and heavily entwined with the cook’s long hair. The cook was drunk, and when I complained she tried to separate me from my manhood with a butcher knife.

Q: What is the minimum foot-pounds of energy today’s bullets must have to kill a deer? How about an elk?
—Johnell Bos, Naperville, Ill.
A: The idea that you need so many foot-pounds of energy to kill a certain species is a complete myth. Indeed, in the history of man on earth there have been few concepts so utterly lacking in merit. I’ve shot deer with everything from a .223 to a .340 Weatherby, and they all went down regardless of caliber. Hit them right with the legal minimum, maximum, or anything in between, and they’ll go flop.

Q: I’ve heard that you do not have to clean a .22 rifle. Is that true?
—Nathan Wiley, Franklin, Ky.
A: Absolutely untrue. At the least you’ll get a buildup of crud in the front of the chamber that will eventually prevent feeding. At worst your barrel will pit, and you’ll need a new one. Many people neglect their .22s, but that doesn’t mean it’s sound procedure.

Q: O Crusty One, why is it that combination guns, such as the Savage Model 24, never really caught on in this country?
—Jeff Moyer, Mathias, W.Va.
A: “Crusty One”? Has it come to this? Rifle-shotgun combination guns are viewed here as muzzle-heavy shotguns with a single-shot rifle attached to no good purpose. They’re popular in Germany and Austria because they’re mechanically complex, and Teutonic gunmakers cherish complexity above all else.

Q: Does shooting shot loads in a .22 rifle or centerfire revolver damage the rifling, cylinder, or forcing cone, thus hurting accuracy with standard ammo?
—Steve Duncan, Marion, N.C.
A: Shooting shot in a .22 rifle should not hurt the gun—or much of anything else. I am, however, uneasy about shooting it in a handgun, which may prove difficult to get truly clean afterward. That said, in .45/.410 it seems to work O.K. You can use it, but I’d give the parts you mention a good scrubbing soon after.

Q: With so many sub-$500 rifles shooting MOA or better, why should anyone pay more than that for a hunting rifle?
—Kim Reynolds, Carson City, Nev.
A: If you view a rifle as simply a tool for collecting game, there is no reason. If you find it a fascinating and beautiful expression of human ingenuity, something of great intrinsic value, then you won’t be happy with a piece of junk that happens to shoot well.

Q: Who is your favorite poet?
—Hans Abeln, Jackson, Miss.
A: My favorite poet is Rudyard Kipling, who was once enormously popular but is now generally regarded as politically incorrect and unfashionable. I bet you thought I was going to say Keats or Byron or Shelley or Frost.