Ducks on a Stick at Pheasant Fest

Ducks on a Stick are a hit wherever they go, even at a gathering of upland bird hunters like Pheasant... 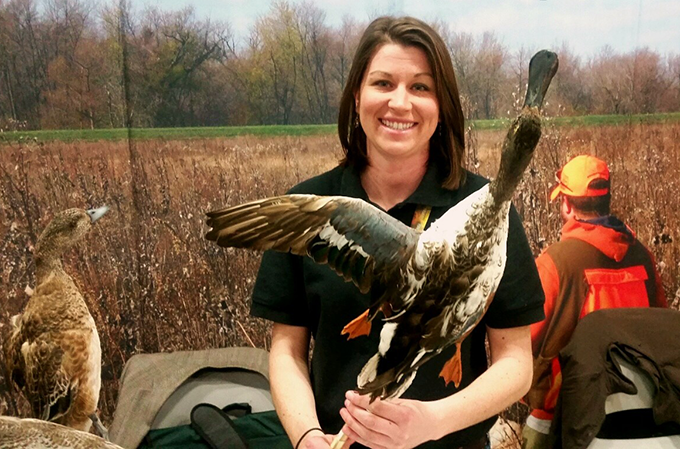 Ducks on a Stick are a hit wherever they go, even at a gathering of upland bird hunters like Pheasant Fest, which took place in Des Moines from February 20-22. And, while I am a bird hunter myself, I have to confess that the exhibit that stopped me in my tracks (other than the Airedale terriers that flush pheasants and fetch ducks — I had no idea) as I walked the aisles of the Fest were the Ducks on a Stick at the USFWS booth. In fact, I did stop dead and exclaim “Ducks on a stick!” AnnMarie Krmpotich, a FWS biologist, explained them to me and graciously agreed to model the Shoveler on a Stick for me.

There are Ducks on Sticks at many FWS offices, and they are used for educational outreach from grade schools to shows like Pheasant Fest. The dowels make convenient handles so you can pass the ducks around or hold them up and talk about them and the ways they adapt to their habitat (the broad, invertebrate-straining bill of the shoveler being a prime example). All the birds are mounted with one wing out and one folded for teaching people to ID ducks both in flight and on the water. __As odd taxidermy goes, Ducks on a Stick are way better than monkees in fezzes smoking cigarettes or whatever it is hipsters are buying these days.

I should add here that the National Pheasant Fest and Quail Classic, the annual celebration/sports show put on by Pheasants Forever and Quail Forever should be on your list of shows to attend if you’re an upland hunter. It’s full of gun makers and lodges and manufacturers displaying their wares. There are tons of dogs there, too, like this springer spaniel, who adored having his long ears scratched.