A couple of you have written comments recently asking why anyone thinks they need to hunt upland birds with a... 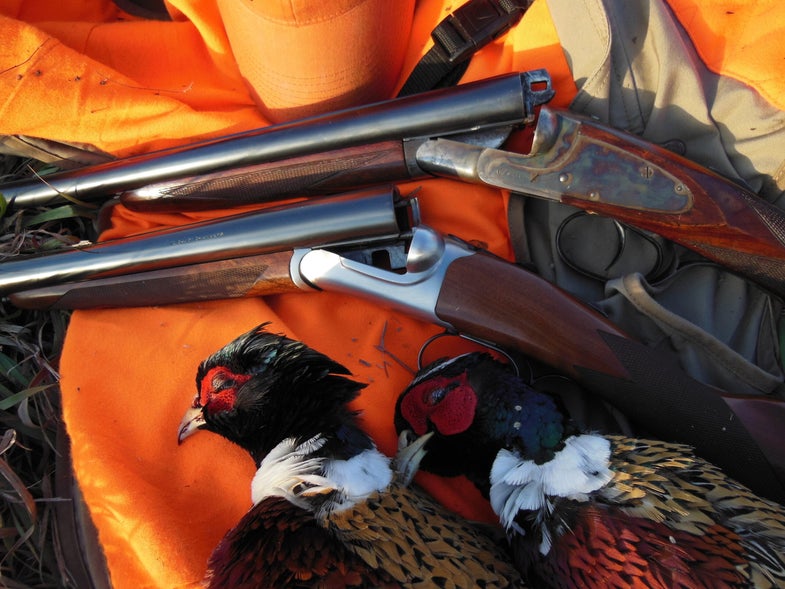 A couple of you have written comments recently asking why anyone thinks they need to hunt upland birds with a break action gun when pumps and semiautos are perfectly fine for bird hunting. And, they are fine, but I shoot break actions, O/Us and doubles both, in the uplands almost exclusively. I shoot them for the following five reasons, listed here from least to most important:

5) I look good. I’d be lying if I said the traditional look of a break action didn’t matter to me a little bit when I’m bird hunting. I’ll shoot ducks and geese with ugly plastic guns but upland hunting demands a little more class.

4) I don’t litter with a break action. It’s easy enough to hold my hand over the breech when I open the gun. The empties pop into my hand, and I stash them in my gamebag. Try that with your semiauto. What’s that? I can’t hear you talking when you’re down there crawling around in the weeds looking for your hulls.

3) I get two chokes. In waterfowling and dove hunting, I believe three shots beats two chokes. In upland hunting, it’s the other way around. Most of the time, if you miss an upland bird with the first two shots, you’ll miss with the third as well. (We are talking here about one man, one dog type upland hunting. In a South Dakota pheasant push, pump and semiauto firepower is a plus).

The majority of upland shots are taken at birds going away, so the second shot will be longer than the first. Having a tighter choke in the second barrel gives me the reach and confidence I need to make good followup shots if I miss or make a poor hit with the first shot.
You can accomplish the same thing by loading different shells in your repeater (tight-patterning Winchester Rooster XR would be perfect for second and/or third shots) but it’s a pain, and you often wind up with shells loaded in the wrong order.

2) My gun always works. Break actions are more reliable. Period. They do not jam, hang up, or fail to cycle. They are not particular about what load you put in them. You can shoot heavy loads, light loads, even misshapen reloads. If you can cram a shell into a break action’s chamber, the gun will make it go off.

1) I feel safer with a break action. It’s not that break action guns are safer, it’s just that it’s easier to be safe with one. I’ll open my gun several times throughout the course of an upland hunt: when I run into someone in the field, as a courtesy to show my gun is unloaded; when I want to cross a fence or creek safely; when I want to check the muzzle to see if I have plugged it with snow; when I want to give my dog a drink or take a bird from him. With a flick of the lever the gun opens and is completely safe.
That’s why I almost always shoot break actions in the uplands.