We haven’t done lever actions in a while, so it’s time to revive the Winchester vs. Marlin argument. This time,... 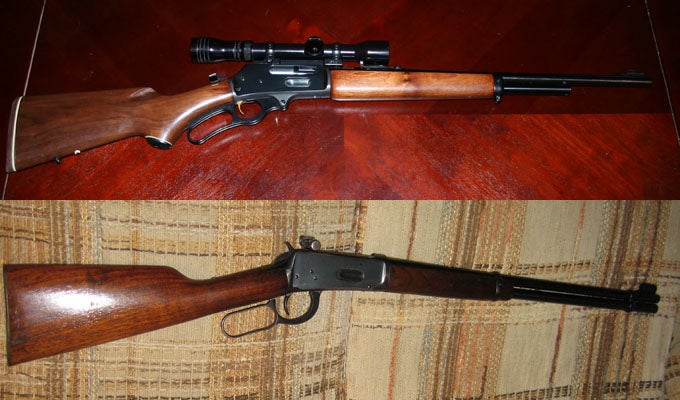 We haven’t done lever actions in a while, so it’s time to revive the Winchester vs. Marlin argument. This time, though, you get to argue about lever action calibers, too. The Marlin 336 is a .375 Winchester, the Model 94 Winchester is your basic .30-30.

Both of these rifles have family connections: Mark’s family is made up of Marlin .375 Winchester fans while jhjimbo has his father’s Model 94.

I do all my deer hunting in northern Michigan, where the longest possible shot is 120 yards or so. I own several Marlin lever actions that work great for those conditions; however, the gun I usually reach for is my Marlin 375. It has good accuracy, and the 200 grain slug makes a big hole, spends a lot of time in the animal, and still has enough energy to pop out the other side. The rifle is topped with a 2-7x Redfield scope, which is perfect for conditions I hunt in. The relatively short length also make it easy to manipulate inside a deer blind.

I’m not alone in my affection for the Marlin 375; my father owns one, my brother owns one, and my cousin owns two. If I see a good used example in the used section of the local gun shop, I may add another one to my collection.

This was my father’s that I borrowed to start deer hunting with in about ’59. I did put on some type of stock sealer so the moisture would not affect the wood. I used to crawl around on my belly in the conifers with the rifle across my elbows looking for deer legs. Also, I used to practice shooting it like the Rifleman. I got pretty good with it and actually got a couple of deer shooting from the hip. That was when shells were $2.50 a box. I never put a sling on it. I carried a piece of clothes line with me I would tie on it so I could carry it on my back when I was dragging a deer out. It was always reliable, easy to carry all day, and it brought home the venison.

I used Remington 170gr to start, have reloaded for it with Nosler 170gr partition FP (discontinued bullet), and now use Hornady Leverevolution, which it loves. I removed the rear sight and put on a Redfield peep sight. Without any inserts in the sight it is extremely fast target acquisition and sufficient accuracy to 100 yards and beyond.

There you have it: two classic lever guns used as they should be, for whitetails in heavy cover. Vote and voice your opinions in the comments section below. And send more gun photos to fsgunnuts@gmail.com.