Wandering the endless aisles of the SHOT Show, you get to look through all sorts of new optics, but it... 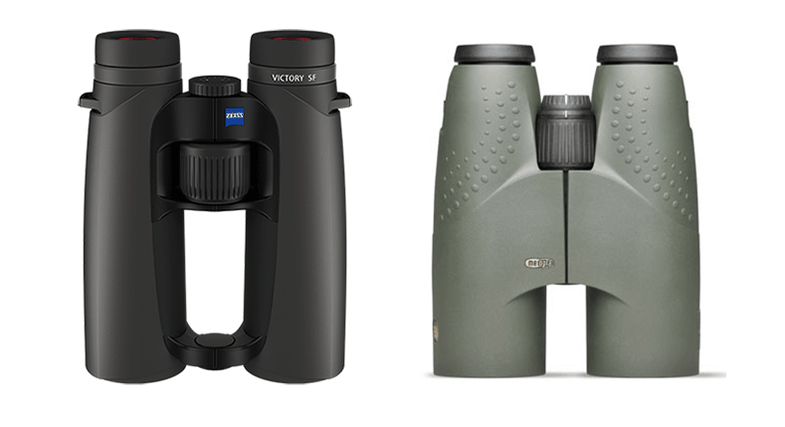 Wandering the endless aisles of the SHOT Show, you get to look through all sorts of new optics, but it can be misleading, because once your eyes penetrate the methane miasma that haunts those hallowed halls, all glassware looks great. If you want to see how things really look, get the hardware and take it outdoors. This I have done, even though my chunk of New England has vanished forever beneath the snow. (When you go to the rifle range and find polar bear tracks in front of the 100-yard benches, you begin to wonder).

First glass on deck is the Zeiss 10×42 Victory SF. It’s a top of the line model into which Zeiss has stuffed every optical and mechanical advantage at their disposal. The SF is characterized by three things: extremely light weight (27.5 ounces) for a glass of its size, a wide (360 feet at 100 yards), dead-flat image of remarkable brightness (92 percent light transmission), and superior ergonomics.

The real worth of an optical instrument lies in testing it against other glasses, so I brought along a first-rate $500 binocular and a 5-year-old binocular that’s in the same price range as the Zeiss. Compared to the $500 glass there was no contest; the Zeiss was far superior. Compared to its price peer, the resolution was about the same but the Zeiss was far brighter, the field of view was much wider, and the weight difference was startling.

The MSRP for the 10X Victory SF (there’s also an 8X) is $2,944; real world is $2,650. Lotta money. Is it really that much better than older first-line binoculars? Yes. Is it worth what it costs? Yes. This is the best that Zeiss can build. The hard case (magnetically closed and opened so you don’t have to fumble) is a thing of beauty. The box in which everything comes deserves an industrial-arts award. When you open it and see the SF for the first time, the other thing you see are these words on the facing side: “Fur diesen Moment arbeiten wir.” “This is the moment we work for.”

The Meopta Meostar 12x50HD is a different breed of cat altogether. At 37.4 ounces it isn’t light, and it gives off that same air of rocklike solidity that you get from all Meopta gear. What it will do for you is show you things that no 10X binocular can. That extra 2 power makes a big difference, albeit at the cost of some field of view, and a 12×50 is a nice compromise between a 10×40 and a 15×60, which Meopta has also introduced in the same model.

Like the Zeiss, this is a top-line glass with every modern convenience. It’s rubber armored, pretty compact for its magnification, 6.8 inches high by 5.5 wide, and optically as fine as you could want. It comes in a loden-green-wool case, and has a nice, heavy neck strap which I don’t care for because it has too many parts.

What can a 12X binocular do for you in real terms that a 10X can’t? To use a couple of examples from my own experience. It will tell you that a bull elk, probably 800 yards away in the early morning mist, is not worth making a stalk on, when all 10X showed was that it was an elk and not a snag. It will show you that a whitetail buck, hanging back in the brush at 600 yards at dusk, is a good one, where all you could tell with 10X was that it was a buck.

This glass is tough, well-engineered, optically excellent, and not cheap. THE MSRP is $1,607; real world is $1,400—about the price of a real good scope or a high-middle-priced factory rifle. But remember that you’ll use the binocular for hours and hours in the course of a hunt and the rifle for a few seconds. The 12x50HD is for serious hunters—weekend whitetail slayers will probably never need it. But if you’re trophy hunting, or trophy hunting at long distance, it’s a powerful tool, and it will pay for itself over and over again.