Photograph via NSSF/SHOT Show The first SHOT Show, which was held in 1979, could be walked in a half-hour. This... 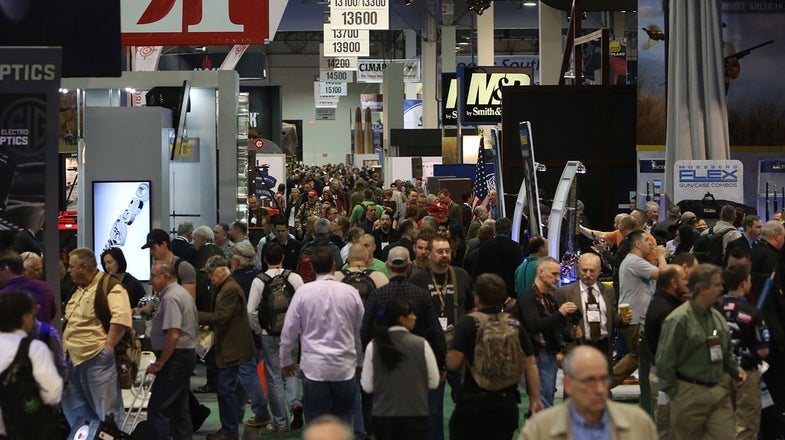 The first SHOT Show, which was held in 1979, could be walked in a half-hour. This latest one and, I believe, my 35th, had 63,000 attendees, and resembled nothing so much as a fire ant mound, with a handful of black ants thrown on it to keep things lively. I managed to see only part of the exhibit, and saw very little that was new, but what I did see was choice.

Range Day is the Monday prior to the Show’s opening when manufacturers demonstrate their wares. People like me are bussed out to handle the goodies. This year, Range Day sounded like the Battle of Dak To, or perhaps Fallujah, with the distinctive pop-pop-pop of full-auto fire, which was extremely popular amongst all the SEAL wannabes. Indeed, this was symbolic of the whole show, which has now become so heavily militarized that you have to look fairly hard for something designed to kill animals instead of people.

For me, the most interesting part of Range Day was an attack-dog demonstration put on by one of the local police departments. Their handler, who carried more firepower than the entire 1st SS Panzer Division Leibstandarte SS Adolf Hitler, put a pair of giant Schnauzers through their paces. These were big dogs—one was 90-plus pounds, the other over 100—coal black, shaved except for their eyebrows and mustaches, which gave them a hellish look. Volunteers stepped forward, were given an armguard for the hellhounds to grab, and the dogs were unleashed.

I was told that they can hit you as hard as J.J. Watt, and I believe it, but showing admirable restraint, they seized the armguards and yanked the volunteers hither and yon, and on command, stopped in mid-chomp. Whether you approved of it or not, you had to admire these beasts. I’ve rarely seen dogs so well trained, even if their purpose in life is to bite your ass.

The forces acting upon the gun industry are Armageddon, for which we are all tooling up, and our Peerless Leader, who has sold more firearms than even Bubba Clinton, and The Horror That Is Hillary, who is lurking in our future like the Wicked Witch of the West. Everyone who makes guns is selling everything they can produce, which stifles the need for innovation and takes the emphasis off firearms that would not be useful during the Latter Days.

Another trend was noticeable. The posters, displays, and photos for anything relating to big-game hunting showed people whose expressions looked like they were getting a prostate exam from the former Secretary of State. Everyone was getting rained or snowed on, wallowing in mud, crawling over boulders, and generally looking like Hugh Glass after the grizzly got through with him. I have no idea what this is supposed to convey. Maybe that hunting is the way to redemption through suffering? If so, allow me to plagiarize mildly from the Army with my own motto:

I saw no booth babes. Doug Painter, who used to be president of NSSF and knows whereof he speaks, assured me there that were booth babes and that they were of very high quality, but I didn’t see any. Indeed, dogs seem to have replaced Booth Babes. There were attack dogs, and bomb-sniffing dogs, and all sorts of tactical dogs, their eyes alight with a terrible intelligence.

Then came the Great Blizzard of 2016, which left people scrambling for the airports. I was fortunate enough to make it out, but a great many colleagues did not. My worst tribulation was sitting in a Delta (of whom I have no fond memories) jet at Atlanta–Hartsfield Airport (of which I have even fewer fond memories; the floors are very hard) waiting 2¼ hours for the plane to be de-iced while the airport personnel, whose prior work experience apparently involved the back end of a mule, struggled to master the situation.