Photograph by USAShooting.org You see some odd shotgunning stances in the field and on the range.* The right way to... 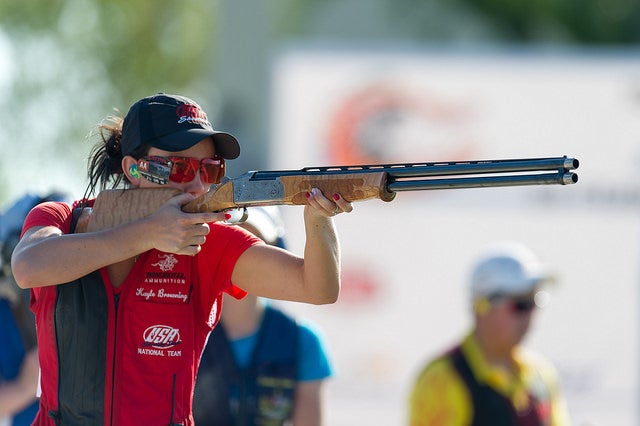 You see some odd shotgunning stances in the field and on the range.* The right way to stand while shooting a shotgun is this: your feet should be no more than shoulder width apart, and I think armpit-width apart is better. Your knees should be neither stiff nor bent. Lean forward from the ankles until about 60 per cent of your weight is on your front foot. You should be standing at about a 45 degree angle to the target.

Standing sideways with your feet far apart and your knees locked as if shooting a rifle makes it very difficult to swing your body to the sides. Standing with most of your weight on your back foot means that when you move the gun up to shoot at a straight away target, you rock back and miss over the top more easily.

In upland hunting you can usually take one step toward the bird with your front foot, which will put you in a good position to make the shot.

Interestingly enough, ten or so years ago when I went to Gunsite Academy for a two-day rifle tutorial, the stance I was taught for shooting the Gunsite-approved Steyr scout rifle offhand was about the same as what I described above for shotgunning. It was a more flexible, versatile stance suitable for shooting in more than one direction. We also practiced finding our natural point of aim as we set up for a shot. What works for shotguns evidently works for rifles, too.

*The oddest was probably the crouch used by U.S.A. shooter Matt Dryke, feet wide apart, knees bent close to 90 degrees. It might not work for you and me, but it won Dryke a gold medal in the 1984 Olympics. See below.