150 Pounds Of Halibut Through The Ice

Given that I don’t ice fish all that often, my mind tends to associate it with tiny taps from little... 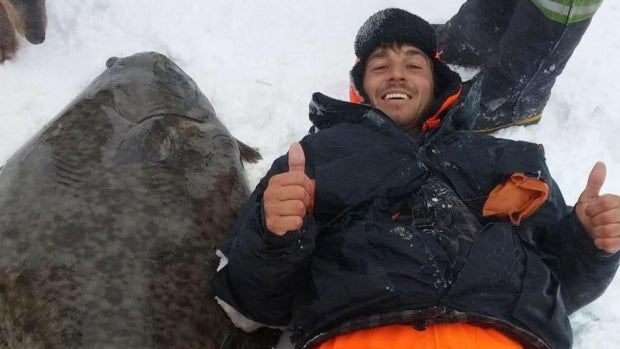 Given that I don’t ice fish all that often, my mind tends to associate it with tiny taps from little perch. Yes, I know ice guys—there are monster fish to be caught. It’s all about location, and mind kind stinks. But believe me, I’ve seen the power and the glory of some giant Colorado lakers on the hardwater. They pulled, but not nearly as hard as a 150-pound halibut would pull. The whole idea of ice fishing on frozen saltwater still boggles my mind, and I do realize the places where it’s done are few and very, very far north. Still, halibut are notorious for letting you get them right to the boat, then screaming right back to the bottom. That’s what happened when angler Charles Gagnon-Brassard tied into this beast in northern Quebec. Five times it came to the hole, and five times it went back down.

From the story on CBC News:

“We are used to catching fish that are a maximum 10 to 12 pounds,” Gagnon-Brassard said.

_Once he managed to get the fish on land, he discovered it was a 70-kilogram (approximately 150-pound) Atlantic halibut — a type of halibut listed as an endangered species on the Red List of the International Union for Conservation of Nature, but not considered at risk under COSEWIC (Committee on the Status of Endangered Wildlife in Canada). _

“I couldn’t keep it. I found it beautiful,” Gagnon-Brassard said. “Leaving it in the water was just normal.”