Having caught white sturgeon in the Columbia River weighing more than 300 pounds, I can tell you they are simply... 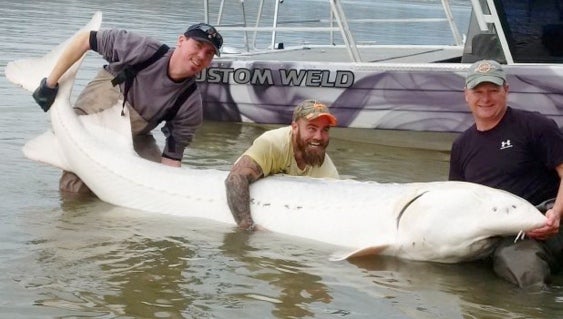 Having caught white sturgeon in the Columbia River weighing more than 300 pounds, I can tell you they are simply awesome fish. Just to be in a freshwater enviroment using tuna tackle—and then watching line peel off those big reels faster than tuna pull—is pretty incredible. But after you battled 4 or 5 five of them, they all start to look the same, and memories of the fights all sort of run together. This will not be the case for angler Chad Helmer, because he managed to best what one could jokingly say is a true white sturgeon…a 12-footer from the Fraser River that Helmer believes is an albino. But others aren’t so sure.

From the story on Timescolonist.com:
_Helmer caught the fish Saturday afternoon after a 2-hour struggle, he said, then he measured it, posed for a few photos with it and released it. _

_Helmers said he measured its length at more than 11 feet, and its girth at around five feet. Sturgeon measuring more than 12 feet have been caught in the Fraser River in recent years. _

_Owen Bird, executive director of the Sport Fishing Institute of B.C., reviewed photos of the fish, and said: “No doubt, that is an unusual fish and big for its kind. I don’t know for sure if it is albino, but agree it is very different in colouring and pale.” _