I vividly remember the first spool of super line I ever bought. It was Berkley FireLine, it was all the... 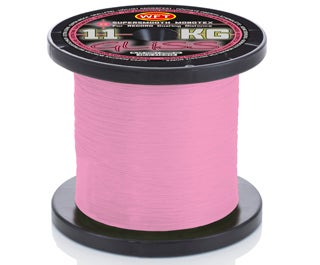 I vividly remember the first spool of super line I ever bought. It was Berkley FireLine, it was all the rage, and given the price back then, I questioned whether this new-fangled string was really all it was cracked up to be. Fast forward to today, and I know I’m not the only angler that has many of his reels spooled with braid. Since the early days of FireLine and Spider Wire, the race has been on to build the best braid, and it seems like every other year or so, someone claims they’ve conquered the super line empire with “slick coat” this and “single fiber” that. While there have been many changes to braid and super line, what hasn’t changed is the cost, which manufacturers say reflects the amount of time it takes to make the stuff. I remember when Suffix’s 832 braid featuring GORE fiber came out, my buddy at the company told me it takes something like 8 hours to spin one 300-yard spool. Well, not only has European company World Fishing Tackle claimed they’ve created the first mono-braid hybrid that’s better than braid, they say it won’t cost you nearly as much money as what’s on shelves now because they can make it pretty fast.

From the story on Angling-international.com:
The line, called Gliss, is made from extruded hmpe fibres and according to WFT’s Managing Director, Christian Dibisch, combines the qualities of both a monofilament and a braid.

“Gliss looks like a mono, but has huge advantages, including almost zero stretch. Other lines have at least three times more stretch,” Dibisch told Angling International. “It also has extremely low diameter-to-breaking strength ratios. At 0.010 diameter, it has 4kg strength.

The potential for Gliss is further boosted by the fact that it can be produced far more quickly and cheaply than braid. Dibisch estimated that it takes around 100 hours to produce 1,000 metres of braid, depending on the type. But he can manufacture the same length of Gliss in a matter of minutes.

“Production is so fast that I am sure it will replace braid in certain fields of fishing,” said Dibisch. “It is ideal for any application where low stretch is an advantage, such as lure fishing and long range fishing. Light lures can be controlled more sensitively than ever before.

Coming from someone who still thinks mono is the best choice for a lot of situations, this line has definitely piqued my interest. If I can get my hands on some, I’ll report back.