Here’s one of those stories that I couldn’t make up if I tried. As reported by Foxnews.com, British anglers Paul... 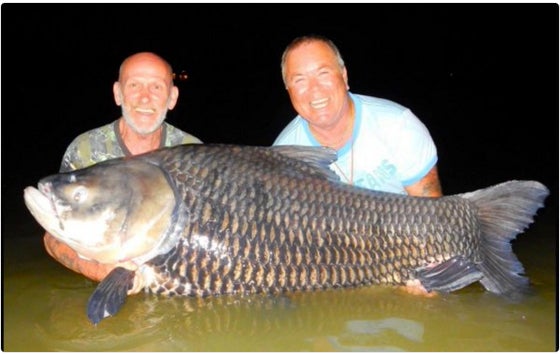 Here’s one of those stories that I couldn’t make up if I tried. As reported by Foxnews.com, British anglers Paul Fairbrass and Cliff Dale mixed some of their late fishing buddy Ron Hopper’s ashes into a carp bait mix, took it to Thailand, and used old Ronnie to best a 180-pound Siamese carp (which, by the way, is technically a world record, though IGFA no longer tracks the species). As the story goes, Hopper was supposed to join the fellas on this fishing trip, but sadly passed before departure day. Dale and Fairbrass thought it would be a fitting homage to mix some of Ronnie into the boilies and take him along anyway. Be completely honest, while there’s definitely a creepy element to this, I kinda dig it. I wouldn’t be sad if some of my ashes ended up in a mako chum slick, or stuffed into a smallmouth tube and used to rip some lips on a buddy’s boat.

From the story:
_Using the special “Purple Ronnie” bait, Fairbrass and Dale battled the massive carp for three hours before catching and releasing it. _

“We were gutted that Ron couldn’t come on the trip because he was really looking forward to it, but he was definitely with us when we caught that fish,” Fairbrass told The Telegraph. “It seemed like it was destiny we would use Ronnie to catch one of the biggest fish in the lake. It’s what he would have wanted.”

Hopper’s wife, Judith, reportedly scattered half of his ashes on beaches across the Caribbean island of Grenada. His fishermen buddies took the other half.

If you had to give friends and family a fishy request that included a bit of your ashes, what would it be?