For a long time now, “catch-and-release” has been beaten into our heads. And the beating has certainly worked. Speaking only... 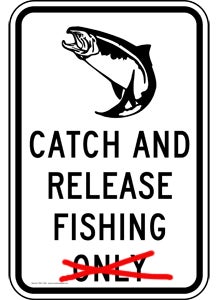 For a long time now, “catch-and-release” has been beaten into our heads. And the beating has certainly worked. Speaking only for myself, I release probably 80% of the fish I catch in saltwater, and easily 99% in freshwater. I think most anglers would agree that it feels good to watch a fish swim off strong. But according to this story on Outdoorhub.com, some folks at Utah’s Division of Wildlife Resources suggest too much catch and release can do a fishery more harm than good. What they’re saying is by not taking some players out the game, you end up with a bunch of small players that may never reach their true size potential. While this article focuses only on Utah, the lesson can be applied anywhere, and I’d be willing to be some of you have even experienced this first hand. What’s most shocking are the the numbers; in Utah’s study, the drop in the amount of fish kept in just a ten year period is pretty staggering.

From the story:
_You may not realize it,” said DWR warm water fisheries coordinator Drew Cushing, “but catching and releasing fish—on waters where you’re allowed to keep some fish—is working against you. Until anglers start keeping some fish, the fish aren’t going to grow to the size that many anglers want. Many of Utah’s waters simply have too many fish.” _

DWR statistics show that 95 percent of all brown trout caught in the state are released, as well as 90 percent of black bass. In 2012, anglers only kept 1,500 walleye from Utah’s famed Willard Bay Reservoir, compared to the 16,000 fish kept in 2002. Although many anglers take great pride in being able to release a fish unharmed, officials now say it is okay to take a few for the trip home. The DWR is considering removing the home possession limit—which is the amount of fish an angler can have in their homes at any one time—completely for all fish species except salmonids like trout, whitefish, grayling, and salmon. Even those species, however, may not be protected for long.

On one hand, you could say that massive ten-year drop in the number of fish kept is a huge win for the catch-and-release on camp. On the other, if you’re hunting trophy walleyes in Utah (or just enjoy a good neighborhood fish fry) you might not see the decrease as a victory. What do you think? Have any of you seen stunted growth in local fisheries because we’re too “catch-and-release” nowadays?