You’ve got a taste for a tuna melt, so you reach into the pantry, grab yourself a can, crack it... 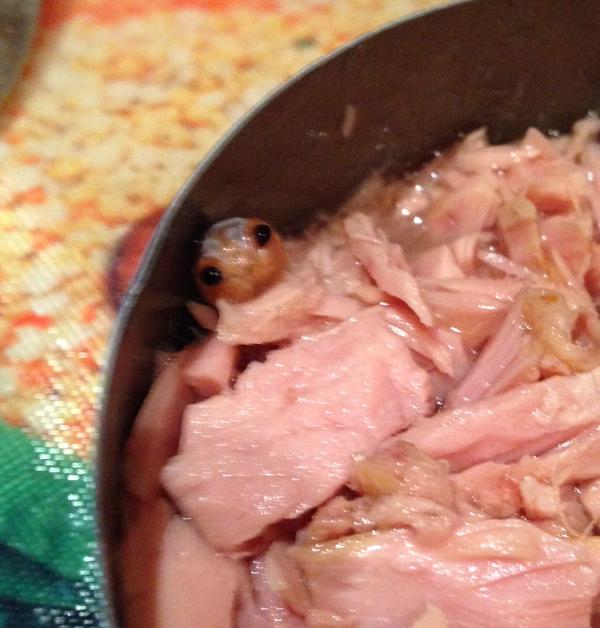 You’ve got a taste for a tuna melt, so you reach into the pantry, grab yourself a can, crack it open unleashing that cat food smell and wham…you see two tiny black eyes staring back at you. This is what happened to Zoe Butler over in the U.K., and it has apparently started a social media frenzy. According to this story on KXLH.com, Butler Tweeted the photo to a local newspaper asking for help identifying the alien creature in her Princes Tuna. Science came to the rescue, although the lab coat crew is split over what the beady-eyed mite actually is.

From the article:
_Now the results are in. The company says the creature was determined to be a Megalopa — a very small, immature crab, the Post reported Friday. The company said it poses no food safety risk. _

_However, The Telegraph enlisted experts from the Natural History Museum in London to try to solve the mystery, and they came up with a different answer. _

Museum scientist Stuart Hine told the Telegraph that the head probably belonged to a Cymothoa exigua, or tongue-eating louse, a parasite that enters through the gills of a fish and attaching itself to the fish’s tongue. Hine said the parasite may have been attached to a smaller fish that was later eaten by the tuna.

It sounds the Princes is offering to hook Butler up with a lifetime supply of their tuna, which she has respectfully declined. Given that this is something like the fifth time I’ve found a story about weird stuff popping up in cans of tuna, it just reiterates that I need to stick to catching my own.