In the past, I’ve poked fun at sous-vide cooking, mostly because I couldn’t get behind the idea of the home... 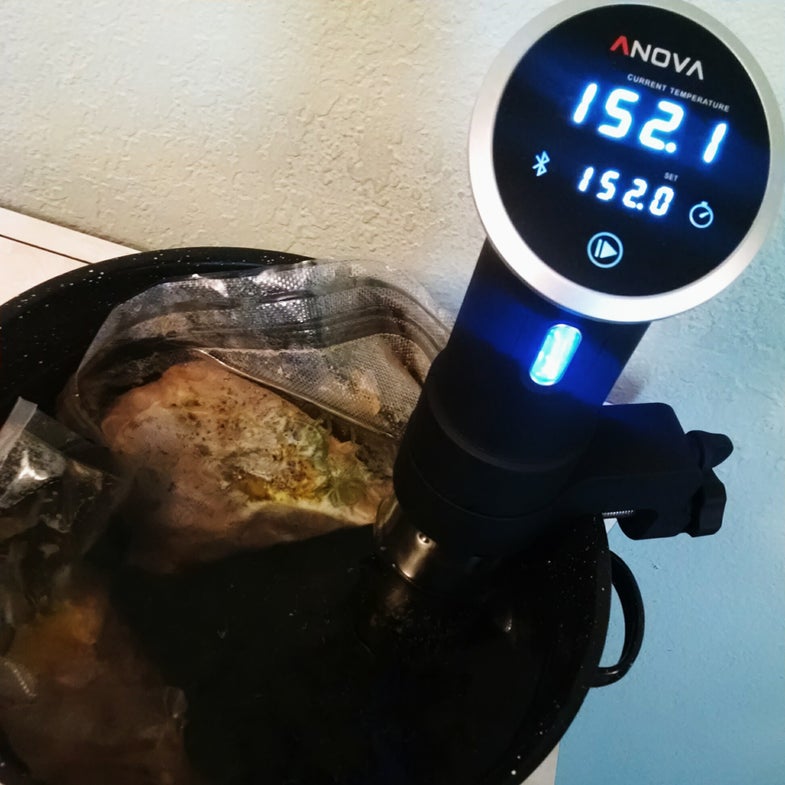 In the past, I’ve poked fun at sous-vide cooking, mostly because I couldn’t get behind the idea of the home cook spending $500 on a specialized machine taking up valuable counter space.

I didn’t have a problem with the actual technique of cooking meat and vegetable under vacuum in a hot-water bath, however. When I got my hands on an immersion circulator, I’ve changed my stance on cooking sous-vice at home, if not on the need for a countertop sous-vide machine.

While sous-vide cooking isn’t that difficult to begin with (you place a vacuum-sealed bag of food in a tub of hot water and wait) the Anova Precision Cooker makes it even simpler, and cheaper. Rather than a bulky all-in-one unit, the Anova is a slim cylinder that mounts to just about any pot or cooler you have—or even, as the Website mentions, a fish tank. Basically, if it holds water and has sides thinner than 1 ¼ inches, the Anova will hang on it (and you could probably retro-fit a clamp to work on thicker-walled containers).

Once in place, the Anova has a simple dial interface and LED readout to set both the water temperature and cooking time. (It also has a kick-ass app that includes a recipe function that will all but cook the food for you, but it’s only available for Apple devices. I’m a Droid guy, so that functionality is lost on me.) Once set, the heater in the Anova brings the water temperature in the pot to the pre-set temperature and holds it there for the pre-determined cook time. This can be 30 minutes or 30 hours. An internal circulator keeps the water moving, preventing hot or cold spots within the pot. Submerge the vacuum-sealed meat or vegetables in the pot and walk away. Come back later to a perfectly cooked meal. It’s seriously that simple.

For cooking wild game, sous-vide makes a ton of sense. By controlling the exact temperature, you can create moist venison steaks (though it will need to be seared after the soaking, make tender turkey thighs, or, as I’ve been doing, cook pheasant breasts in batches that you can then use in other recipes all week long. Probably the biggest challenge I’ve had is finding sous-vide recipes for wild game. There are a few out there, especially pheasant recipes from British chefs, but otherwise I’ve been making things up as I go. Experimenting with the Anova has been a lot of fun, and honestly, because the meat cooks in a sealed environment at the correct temperature, it’s been impossible to ruin a cut by overcooking.