I think we’ve established I like cooking with beer. And by that I mean that I like to drink beer... 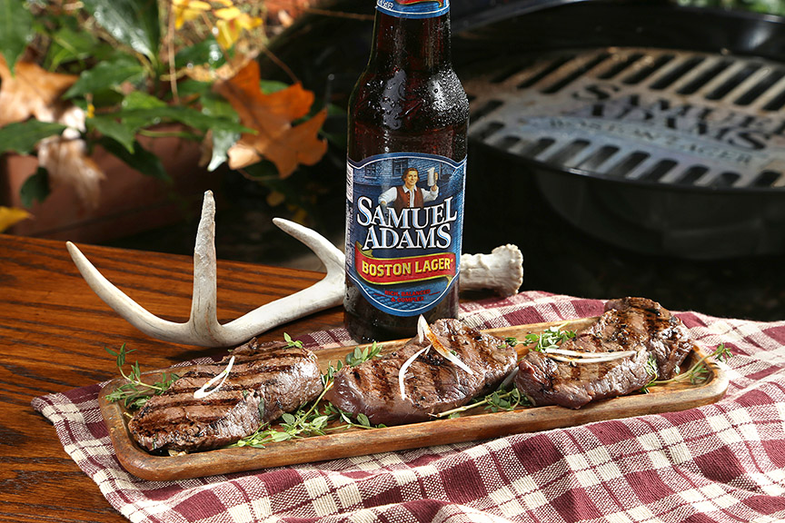 I think we’ve established I like cooking with beer. And by that I mean that I like to drink beer when I cook. Occasionally I also put a little in whatever I’m cooking. It’s amazing what a half-pint of Guinness will do for a long-braised roast or as a portion of the liquid in a venison-based stew. Typically my rule is the more flavorful the beer, the better it is as an ingredient, which is why Samuel Adams Boston Lager is a good choice. The upfront hop and malt flavors complement the richness of venison, especially when the meat has been grilled, which adds some caramelization to the equation. This particular recipe comes from Samuel Adams by way of Vinson Petrillo, chef de cuisine at Brooklyn’s Prospect restaurant.

For the Grilled Venison Loin:
Trim the venison loin of any excess fat or silverskin, and start the grill. Brush the trimmed venison with olive oil and season generously with salt and pepper. Grill the venison, turning often for even color on the outside and an internal temperature of 127 degrees. Once fully cooked, rest the venison on a bed of crushed garlic, thyme, and sliced shallots, turning often until the juices are rested. Reserve warm.

For the Sauce:
Grill the anchovies for one minute on each side and chop them very fine.

Mince the shallots and sweat them in a large sauce pan until they are translucent and without color.

Deglaze the pan with one bottle of Samuel Adams Boston Lager and reduce the resulting mixture by half. Add the roasted venison bones (lamb necks or bones will work if venison bones are not available), chicken jus, and water.

Slowly simmer the bones in the sauce for 1 hour. Remove the sauce from the heat and strain it through a fine strainer. Return the strained sauce to a smaller pot and continue to simmer until the sauce just covers the back of a spoon.