My garden is mess this year. It seems every tomato gets half-eaten by rabbits before I can pick it, and... 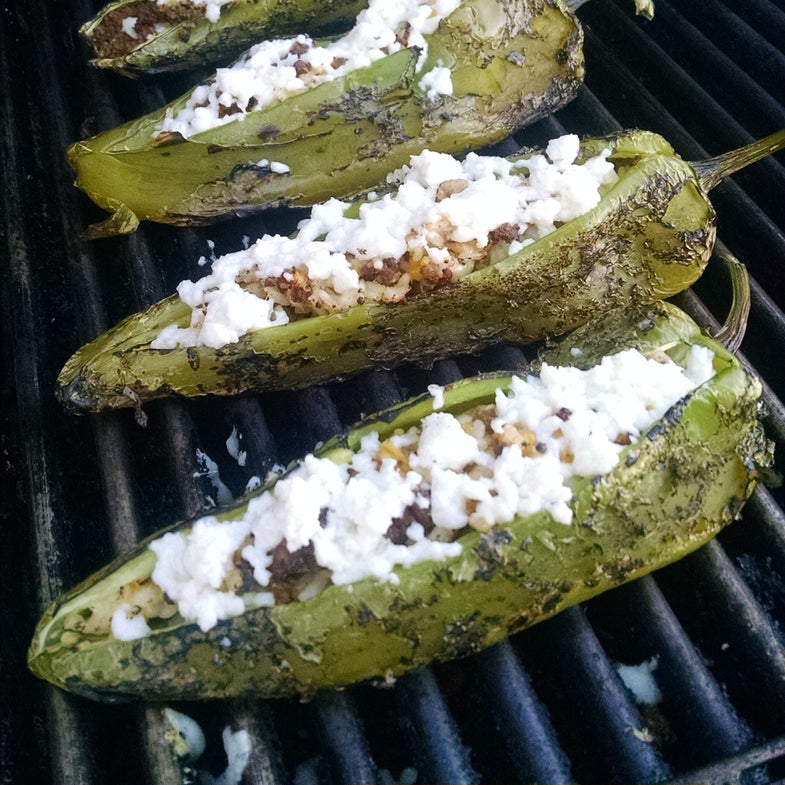 My garden is mess this year. It seems every tomato gets half-eaten by rabbits before I can pick it, and mice or moles are taking chunks out of my potatoes. Only my pepper plants have survived the onslaught, but even they are looking sad. Good thing my girlfriend’s family has a large garden, because she came home the other day with two giant totes of tomatoes and assorted peppers—from bell peppers to Anaheim chiles. I’ve spent the last few days digging through the baskets, making homemade salsa and roasting peppers before they go in the freezer. I also worked up a batch of Chile Rellenos stuffed with queso blanco and moose chorizo (which you can learn to make here).

For a healthier take, I opted to roast my Chile Rellenos rather than fry them, and instead of sour cream, I whipped together a cilantro-lime topping using plain Greek yogurt. Okay, so there’s a bunch of cheese in here, too, so maybe these aren’t that good for you, but a guy can only take so much healthy living at a time.

Directions
Make the yogurt: In a small bowl, stir all of the ingredients together to incorporate, and refrigerate for 30 minutes to let the flavors blend.

Lay the green chiles flat on the counter and, with a sharp knife, make a long slit in the top side of each one, starting ½ inch down from the stem and stopping ½ inch from the tip of the pepper. Using your fingers or a small spoon, carefully remove the seeds and white ribs of the pepper.

Roast the green chiles over an open flame or under a broiler, rotating often, until skin is charred. Place the chiles in a paper bag to steam. (Alternatively, you can steam the chiles in a bowl covered with plastic wrap.) After 10 minutes or so, the blackened skin should peel off easily. Don’t worry about removing all of it, as the char delivers a nice layer of flavor.

As the chiles steam, brown the chorizo in skillet set over medium-high heat. Push the chorizo to the side, lower the heat to medium and add the whipped eggs. Stir until just cooked, then add the rice and ½ cup of queso blanco. Stir everything to incorporate and remove from heat.

When the filling is cool enough to handle, use your hands or a spoon to stuff each pepper as full as possible.

Set up your grill for indirect cooking, and place the peppers on the side away from the fire to cook. Roast for about 30 minutes or until the chiles are soft. Sprinkle the remaining queso blanco over each chile, close the lid of the grill and cook until the queso is melted, about 5 to 10 minutes.

Remove the stuffed chiles from the grill and drizzle each with cilantro-lime yogurt. Serve with warm tortillas and ranch beans.