The Trout Dinner That Got Away

The fish in the photo above is not the trout I caught last Monday. That rainbow was a savage, fat... 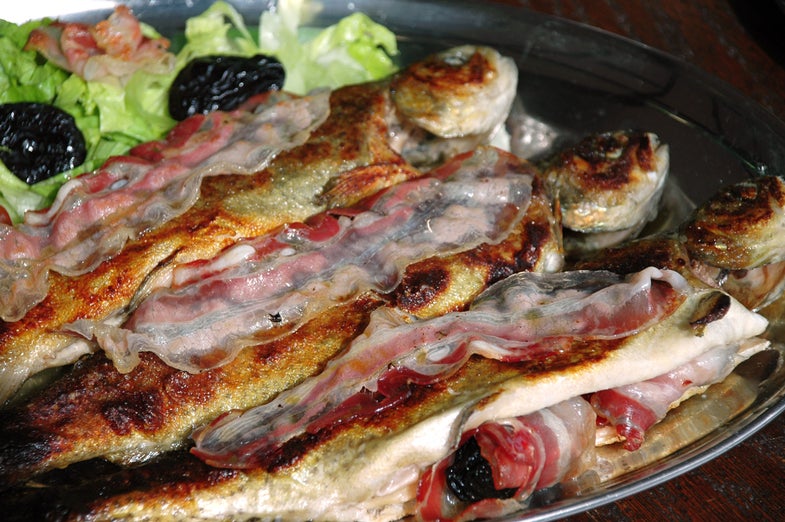 The fish in the photo above is not the trout I caught last Monday. That rainbow was a savage, fat and wild, living where you wouldn’t expect to find such a trout. There is no known photograph of this fish. I didn’t stick it directly in the cooler, since my ego—addicted as it is to the instant gratification of social media—demanded a quick cell-phone pic.

As I instructed my brother, a professional photographer, on the finer points of photography, the trout took advantage of my inattention and lax grip. After slipping through my hands, the future fire-roasted trout dinner bounced once off the windshield, wiggled across the top of a tackle bag, and slid over the side of the boat with all the grace of an Olympic diver, entering the water with just the blip of a splash. I was, and still am, mourning its loss.

It’s still a little early here in Nebraska to fish. A digital thermometer says that the water temperature is a chilly 41 degrees, and on Monday, a cool wind was blowing from the southeast. Still, the rule is that you fish when you can, and my brother and I had holes in our schedules that allowed us to get together for the day. To say the fishing was slow would imply fish were biting at all. They weren’t. There were a few phantom hits, most likely the drag of our lures pulling through underwater snags. Once, I did find a walleye’s green-tinged scale impaled on the rear treble of my crankbait—irrefutable evidence of at least one swipe during the long day on the water.

The savage rainbow came in the middle of the afternoon. I’d been casting nearly non-stop since we got on the water, pausing only as long as it takes to eat a cheese sandwich. Time for a snack, I braced my rod against the gunwale with just enough forethought to tuck it under a cleat. This would prevent the pole from going overboard in the unlikely event of a bite.

Seconds later, I watched my rod tip jerk twice, violently, then form a deep bend, as if snagged on the shallow rocks the boat had drifted over. After un-holstering my hand from deep inside a bag of jalapeno kettle chips, I grabbed the rod and felt the electricity of a live being travel up the line and through my arm. With that kind of fight, I could tell this wasn’t the indifferent headshake of a lethargic walleye accepting its fate but a more substantial catch. With a few cranks of the reel, the trout—a good 16 inches long, with a rotund profile—came over the transom, flopping wildly on the carpet, trying to shake my No. 7 Jointed Shad Rap from its jaws.

I’m not a catch-and-release purist, so there was no question whether this rainbow trout caught from a prairie reservoir was going back in the water. Before I had the hooks from its mouth, I could already smell alder smoke from wood chips thrown over glowing charcoal. The trout’s belly would be split from chin to vent, the innards removed and replaced with prunes and rashers. I’d first tried this simple preparation alongside Croatia’s Gacka River, and since then, every trout I’ve killed has been honored and eaten the same way. I am, if anything, a sucker for food memories.

But, as you already know, there would be no such memory of this particular fat, savage trout. Instead, it lives with me in a different type of story, as one of the many uneaten meals that got away.