Illustration by Yuta Onoda “You ready?” Jack nods. “Which way are we going?” “Away from the creek bank, toward the... 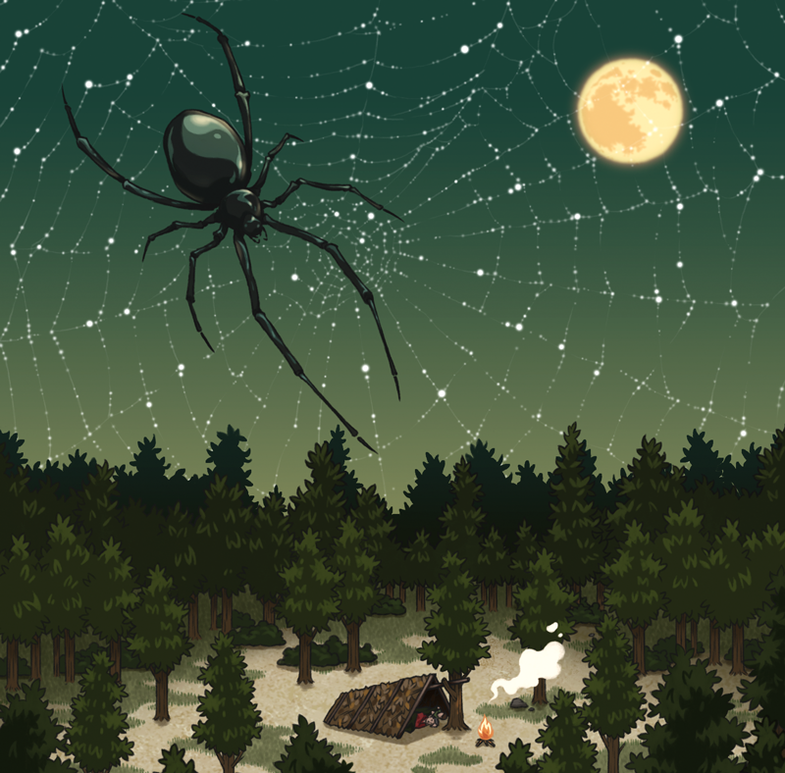 Jack nods. “Which way are we going?”

“Away from the creek bank, toward the deeper water,” I say. “Get clear of the boat so it doesn’t knock your noggin.” He shakes his head. He’s still not convinced that I’m serious about this. “One, two, three!” Together, we jerk to starboard, tipping the canoe over, and roll into the creek. The water isn’t frigid—mid 50s, maybe—but it’s still a slap to the face. We come up gasping. It takes a slick hand-over-hand pull along an ironwood tree to hoist ourselves out of the water, and we drag the boat from the stream. I’m about to flick a single crayfish off the bow deck when Jack cries out: “Dad, what are you doing? We’re trying to survive out here!”

He’s right. Keep all the parts. I stuff the crayfish in my pocket and pat a small survival kit that rides on my belt. It carries the basics: space blanket, small folding knife, flashlight and extra batteries, compass, 20 feet of parachute cord, EpiPen and Benadryl, water-purifying tablets, duct tape, lighter, magnesium-spark lighter, and three fire-starting cubes. “Let’s go,” I say.

Prepare for the Worst
For a couple of years now, Jack and I had talked about this—pulling off a survival night where we had to tough it out alone, in the woods, with nothing more than a few survival essentials. We are not fooling ourselves: This isn’t the Arctic and we’re not lost. But I don’t want my first crack at building a debris hut to come when I’m hurt, wet, and shivering in the snow. Getting through the night has a lot to do with what you know, I figure, but also how well you can keep your head on straight. Practice might not make perfect, but it should help you power through the dark places and make it to dawn.

Our first chore is the venerated debris hut. I find a downed tree limb to use as a ridgepole and wedge it against the trunk of a fallen pine, then start gathering dead wood for the wall ribbing. Jack’s on firewood duty, and I hear him whooping it up at the base of the ravine where he’s found the mother lode of fast-firing cedar. After 45 minutes I’m surprised by my slow progress. We have about an hour of daylight left, so I call Jack off of firewood duty. First things first.

Two hours after we dumped the canoe, the shelter is ready. We’ve worked up a sweat dragging the ridgepole and firewood, and night falls as we nurse a small fire, roasting our lone crayfish on a stick. There’s plenty of water, scooped and purified in a bowl I made from duct tape (see below). It’s not till I sweep the flashlight toward our hut that I come to terms with the long night ahead.

The forest floor glitters like a green Milky Way. It’s the eyeshine of spiders.

Fade to Black
The first few hours go as expected. We squirm on the hard ground. We count coyote howls. Spiders drip down on us like dew. “Living the high life,” I mutter. Jack doesn’t respond.
Hips aching and shoulders sore from the hard ground, I take mental notes of what I’ve learned so far—what I’d do differently in a true survival situation. I’d try to give myself more time to build a shelter. I didn’t treat enough water, and now I don’t want to chance a night hike to the creek. And I’m adding a second space blanket to my kit. They’re small and light, and I’d be a lot happier with one as a sheet and not just as a ground cloth.

I keep the truth to myself. “A couple hours to dawn, yet,” I say.

I’ve spoken with survival experts and survivors, and I’ve spent enough wretched nights solo in the woods to know that half the battle is a mind game, not whether you can snare a squirrel or wrench water from a vine. Lost or injured, the best course of action is often to find a suitable bivvy spot and stay put. Passing the time becomes the challenge. A positive attitude defends against second-guessing and poor choices.

“Up and at ’em, buddy,” I say. “Let’s get a fire going. No reason to be miserable while we’re out here being miserable.”
A half hour in front of the fire, and Jack’s eyes start to flutter. “O.K.,” he says. “Let’s finish this.” That’s all it takes—a bit of fire, a warm body to lean against, a few half-hearted jokes, and we’re over the hump.

When I wake up hours later, my back feels like a mile of bad road. I piece together the fragments of the rest of the night. At one point we got shivering cold. Jack pulled the space blanket tight like a burrito, but it wasn’t large enough for two. He finally gave in and we spooned chest to back, sharing body heat. Whatever it takes. The sandman finally showed up for good.

Now I roll over, expecting Jack, but he’s not there. I sit up, bang my head against the hut’s roof, and send a shower of dirt and leaves and bugs over my back. When I emerge, Jack is snapping twigs for a fire. A turkey gobbles. It takes a minute to straighten out the rusty vertebrae and stand up tall. Jack looks over his shoulder, face smudged with dirt, and smiles at me grimly.

Next time, we could be truly lost or badly hurt or in some serious trouble of one sort or another. Now I know how to build a better debris hut, and how to barrel through a long, lonely night. More important, next time won’t be the first time. I feel very good about that.

Tip of the Month:
A Super (Survival) Bowl

With a roll of duct tape, you can make a bowl to gather water from a spring. Wear pants (not shorts) and take a seat: Bend one knee up toward your body. Center an 18-inch length of tape, sticky side down, on your knee cap, then press the two tag ends down along your shin and lower thigh. Cross this strip with another 18-inch piece. Next, work your way around, overlapping the duct-tape strips, until you have a bowl. Take your time to seal any folds. Strip the bowl off your knee, turn it inside out, and repeat the process to cover all the sticky stuff.