Scout’s Honor: The Long Hunt for the Perfect Deer Spot

Illustration by Michael Marsicano At one point I was on my hands and knees, squirreling through a tunnel gnawed in... 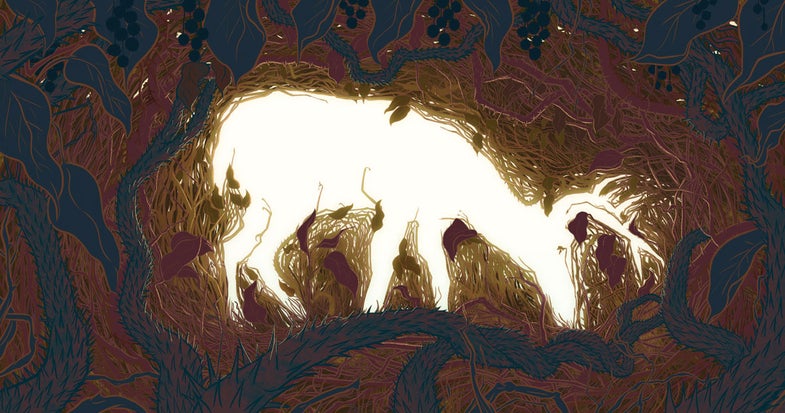 At one point I was on my hands and knees, squirreling through a tunnel gnawed in a curtain of greenbrier. For the moment it was the only way forward, and while it’s hard to imagine that any creature larger than an opossum could make its way through this wormhole in the thicket, the deer tracks told a different story. The buck came this way.

That’s the way it works with swamp deer. The fact that it seems nearly impossible to move makes it all the more likely that the deer came this way. The vines were chewed off in blunted ends; deer literally ate this trail. And the old rubs on the fattest saplings told me that at least one good buck knew about the route. I had been at it for an hour, and I was going to figure out where the trail led.

This is what whitetail deer hunters do. We wade the creeks, climb the ridges, scour the distant corners of the lease. We think like a deer. Look for acorns. Look for sheds. Look for gnawed-off honeysuckle. We obsess. All year long we wonder about the deer. Where are they feeding, drinking, sleeping, moving? How can I intersect their world? We walk deer ground when we can. We crawl it when we must.

That’s what separates my deer hunting from my bird-watching and my canoe camping and even my fishing. I’m not here to spectate, to relax, or to have a good time necessarily. Not at the core. I hunger to enter this other world where whitetails sift through the thickets, where they breed and live and die. I want to play a part in that hidden drama and make my own mark, no matter how small.

It begins with scouting.

First Step
I only recently joined the Stillwater Hunt Club, so I’m the newbie. I have my work cut out. The club leases nearly 4,000 acres of swamp woods, pine plantation, and checkerboard farm fields, so it’s difficult just trying to keep from getting turned around—not lost, never lost—much less trying to dial in on a couple of tucked-away stand sites that haven’t already been discovered.

I started the way most of us do, the easy way: walking the field edges, the power-line cuts, and farm paths, looking for deer tracks, droppings, and subtle trail openings there. That didn’t last long, though. I’ve never been much of a field hunter. I like to watch a deer move through the woods, weaving around the blowdowns, feeding on gum fruits, scratching an ear with a hind foot. Just being a deer. Often, there are long moments during which I don’t even know if I’m going to pull the trigger. Sometimes the moment just doesn’t feel right. What a pretty morning to be a wild deer in the woods. It’s your lucky day, old girl. I can wait. I rarely regret it.

Other times I know the instant I see the whitetail that she’s going home in the back of the truck. I rarely regret that, either.

I picked up this trail a few hundred yards away, in a creekbottom where a stand of wrist-thick trees grew as dense as the bristles on a hairbrush. This country doesn’t make it easy. My buddies and I get a kick out of conventional deer hunting advice that prompts hunters to search out bedding cover, feeding cover, transition zones, and staging areas. In this neck of the South, two-thirds of the landscape is edible, and a deer can stand up from its bed—that’s edible, too—and snack on basket-oak acorns, honeysuckle vines, persimmons, and fox grapes, then finish up with a ­fiber-​rich mouthful of greenbrier, all while simply spinning in a circle. Pinch points? Funnels? In a 100-acre clear-cut?

That helps explain the allure of a beanfield. Which, for a guy who likes the woods, makes it that much more critical to find the spot.

Waiting Game
I’d abandoned hope of dry feet early on, wading through waist-deep beaver sloughs, pouring the water out of my knee boots, and squishing through the woods. The trail, still faint but growing more distinct as more deer joined the flow, rose out of the creekbottom to arrow through an overgrown patch of pine plantation, then seemed to stop at the garish curtain of greenbrier. I was pushing through it, on hands and knees, when I fell forward hard on my elbows and tumbled into another world.

The brier thicket gave way, suddenly, to a small glade off a corner of the beanfield. When I looked around, I knew in an instant: Stepping gingerly out of the greenbrier, the deer would have their heads down. They’d make a slight right turn to get around a big water oak, then look toward the field edge, drenched with sunlight. That’s the moment, I thought. I can climb that holly. Disappear in its swirl of branches, green all season long. Look down at the whitetail shaking off the last of the grasping thorns. Come November, this is the place.

Now, hidden in the holly, I carefully ease the bolt forward. It’s been a long five months, dreaming of my spot.