Tools for the End Times: The Apocalaxe

A while back, Council Tool Company announced a contest to name its new multipurpose survival hatchet. I’m a big Council... 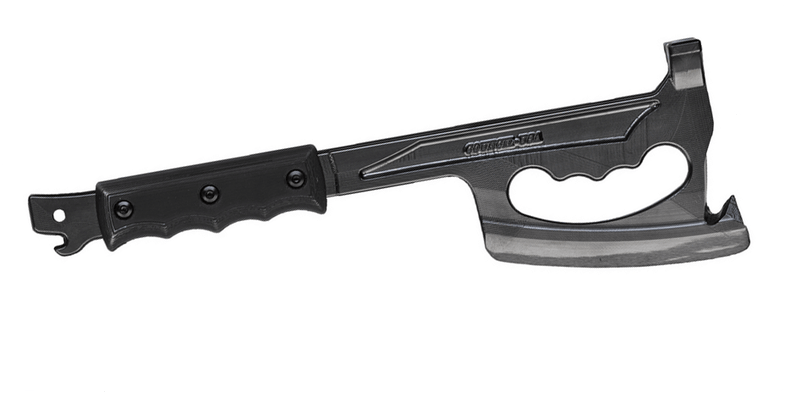 A while back, Council Tool Company announced a contest to name its new multipurpose survival hatchet. I’m a big Council Tool fan. Council axes, hatches, and fire-fighting tools are drop-forged in North Carolina and they’re examples of the best in American manufacturing. The Velvicut axes are as good as you can get.

I wasn’t really sure what this new multitool-axe-thingy was supposed to be, but it was a slow morning so I poured a fourth cup of coffee, lit up with inspiration, and fired off my entry. Glory be—the APOCALAXE won the show. My prize: A swanky t-shirt that commands: “Get Your Axe Back To Work.” My son, Jack, promptly stole it, and surprisingly, he hasn’t been sent home from school yet.

The Apocalaxe is a mishmash of a tool—a little bit of a hatchet, a little bit of a hammer—and you might wonder what the point is. For a survival tool it has its utility. Two pounds and you have a hammering tool for pounding in tent stakes, a lightweight chopper that should suffice for limbing branches and stacking up kindling. I could see the Apocalaxe coming in handy in a canoe, for clearing a hole through downed trees and opening a frosty at lunch. I’m not sure about the gut hook, and as for the survival hatchet’s utility for skinning Zombies, touted on Council’s website, well, pretty much everybody knows that you can slough off the skin of the undead with a bent coathanger.

There seems to be a welter of these end-times survival hatches cropping up. Kershaw has a new one, the Tinder. Tactical tomahawks have made a resurgence as unlikely as the fire plough. There’s certainly an argument to be made that these are, at least in part, directed to the mall ninja crowd as much as to serious hunters, campers, and anglers. But if Council Tool and Kershaw can make a few shekels off these things, that’ll help keep them in the increasingly challenging business of making serious American working tools. And, I can’t argue with that.