Overall activity status: It’s that time again, when whitetails rid themselves of velvet and start readying themselves for the combat... 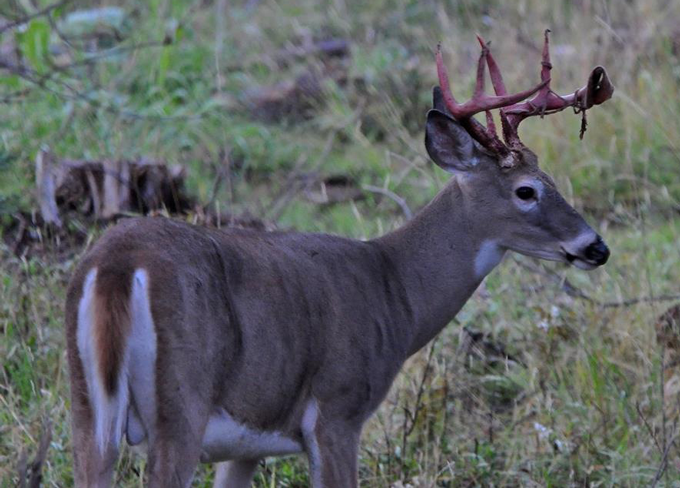 Overall activity status: It’s that time again, when whitetails rid themselves of velvet and start readying themselves for the combat to come in November. This young buck shed his entire rack’s worth of velvet in 30 minutes by using only the ground. Popular Inland Northwest fishing guide Rich Lindsey took the picture and watched the whole act near Priest Lake, Idaho, two days ago before heading south to the Columbia River’s Hanford Reach. Lindsey will fish the all -time record chinook salmon run until mid October, when he’ll return home to resume reporting on deer and to begin his pursuit of big north woods bucks.

A quick pan across the West shows strong or rebuilding whitetail populations almost everywhere. Back-to-back years of EHD outbreaks in Montana and Wyoming have been broken by favorable weather, including an end to the drought that plagued the Northern Rockies states. That drought concentrated deer around scarce, stagnant water sources, ideal conditions for the tiny gnats that carry the disease. Although whitetails will be thin in numbers along some river bottoms in Big Sky country and in the Cowboy State, they are flourishing in much of the two states, including along the Wind River, home to some of Wyoming’s largest whitetails. Reports from both states show deer are still deeply entrenched in summer patterns. This behavior usually holds until a major weather shift occurs in October.

Drought has come to an end in the Northern Rockies, but dry conditions are uncharacteristically plaguing the Oregon Coast. In Douglas County near the mouth of the Umpqua River, Oregon game managers have confirmed the first-ever EHD outbreak recorded in the area. Western Oregon is a blacktail deer paradise, but among the masses of little blacktails live the rarest whitetails in the west, a diminutive subspecies known as Columbian Whitetails. Roughly 5,000 of the dog-sized deer persist in Douglas County, with a couple hundred in Washington along the lower Columbia River. Biologists have confirmed at least 100 dead deer, mostly whitetails, along with at least one blacktail that also died from EHD. Mule and blacktail deer are about 90 percent less likely to contract the disease, although all of our deer are carriers of the disease. Still, a bad outbreak usually affects about 10 percent of a herd, while the disease can affect 90 percent of a whitetail herd in a given outbreak area. The scope of the Douglas County outbreak is unknown, as is the disease’s impact on hunting opportunities.

While whitetails across the West are still deeply in summer patterns, a cooling trend has increased activity a little, and reports from around the west suggest bucks are shedding velvet or have already shed.

Fighting: Young bucks have been reported pushing each other around, but we’re quite a ways from any serious combat. Mature bucks in bachelor groups are still together rubbing antlers, but this will soon change as their intolerance grows.

Chasing: Young deer are playing, but the bucks and does are still in awkward-Junior-high-dance mode.

Daytime Movement: Deer are entrenched in summer patterns and are moving early and late. With last night’s super moon, it seems likely deer will be even more active at night and less so during legal shooting hours for archers patterning early season bucks.

X-Factor: Right now hunters are scoring almost exclusively as deer move between feed and bed. If you’re hunting now, find out where bucks are eating breakfast and dinner. Take a cue from the deer and skip lunch.