Idaho Whitetails Are Sparring and Scraping

If I could cast a vote for the best western whitetail state, Idaho would get mine due to its big... 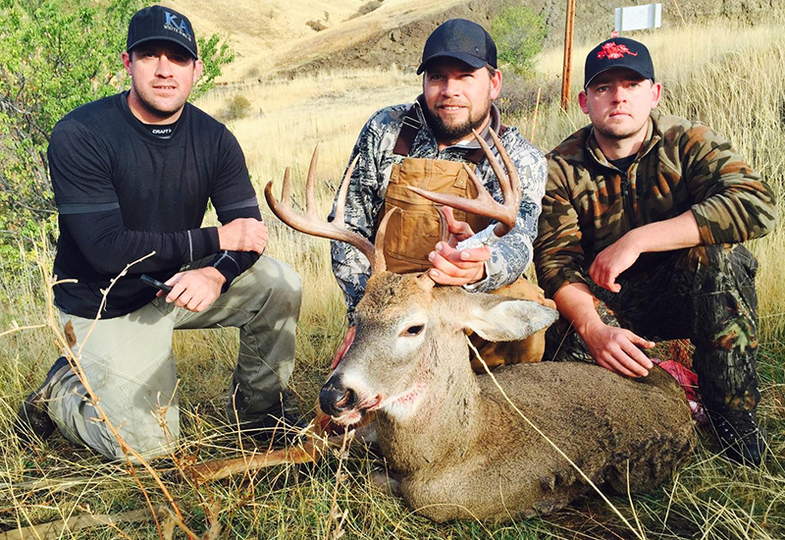 If I could cast a vote for the best western whitetail state, Idaho would get mine due to its big bucks, excellent age structure, and vast public land with very little pressure. This healthy buck was harvested by Bob Hvinden Dickinson of North Dakota in what most consider mule deer country: the open breaks above the Salmon River near Whitebird, Idaho. The rut is beginning here already.

According to Kurt Killgore of Killgore Adventures, a premier Salmon River and Hells Canyon jet-boat outfitter, their whitetail hunting is the smallest part of their operation, but their nearly 100 percent success rates on mature 4×4 or larger bucks is as impressive a number as I’ve heard in the Inland Northwest for any outfitter or hunting club. Perhaps more impressive are the reports from the field over the last week. Bucks are scraping, sparring, gathering around doe-fawn groups, and becoming much more active in general.

“Our first hunter of the year harvested a five-point after a very short hunt,” says Killgore. “We watched his buck fight another large buck for quite a while. While that was going on we watched another mature buck scraping furiously up the draw a ways. When the two bucks stopped fighting, he fired.”

Killgore reports seeing some young bucks harassing does and has watched interest begin to perk up from the many mature bucks he and his colleagues view on a daily basis.

“It’s hard to believe, but on one of our properties down here, you can sit and glass 10 to 20 mature bucks from one position when the rut is at its peak,” says Killgore. “It’s a great place to harvest a buck and also just to observe their behavior. The peak of the rut is still a ways off, but it’s beginning here already for sure.”

From the dog-hair thick forests near Priest Lake to the open breaks and benches along the Clearwater and Salmon Rivers, whitetails greatly outnumber mule deer in North Idaho, although there are plenty of both. In the southern half of the state, mule deer rule, and game managers set regulations to slow the steady advance into both Central and Southern Idaho.

The lower Salmon River breaks are famous for producing mule deer bucks, elk, and chukar partridge, so whitetails often go overlooked. The verified reports and hunt stories I’ve heard recently from Whitebird have intrigued me enough to make a long drive and expend one of my two non-resident Idaho deer tags in a place where I have personally seen absurd numbers of mule deer on fishing and rafting trips, including many stupid and giant bucks. I’ll report from the field this November from the Salmon River, the mountains around Coeur d’ Alene and Priest Lake, and from Washington’s Palouse, where I’ll end my late muzzleloader season hunting whitetails.