Don’t Feed the Deer: How Corn Can Be a Killer

The old saw “killing them with kindness” was at play this week in the northeast. According to this press release... 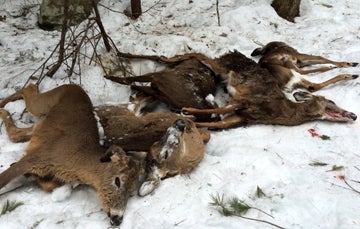 The old saw “killing them with kindness” was at play this week in the northeast. According to this press release issued by New Hampshire Department of Fish & Game, citizens in the town of South Hampton found six dead whitetails in a wooded, suburban lot on March 20. State biologists and a warden responded to the call and, after a brief search, discovered an additional half dozen dead deer. After examining the animals at a nearby veterinary lab, authorities confirmed that at least two of the whitetails were victims of enterotoxemia, a condition directly linked to feeding deer—primarily corn—in winter.

To shed more light on this incident, I called my friend Kip Adams. In addition to serving as the Education/Outreach coordinator for the QDMA, Adams is certified wildlife biologist and the former Deer Project Leader for the NHDFG. Adams was not only familiar with the case, but of many others. “It’s actually fairly common, and why state agencies generally advise people to not feed deer,” he said.

According to Adams, wintering whitetails—especially in the North—subsist largely on woody browse, and not much of it, for the duration of the winter. “Then, all of a sudden, you introduce a high-energy food in large amounts, and the result is not good for deer,” he says. “The whitetail rumen, or stomach, is full of microorganisms that help digest food, but it takes them at least a week to adjust to each new food type taken in. If those microorganisms can’t adapt by taking in small amounts over a period of time, the result is such a shock to the system it can kill deer pretty quickly.”

Adams says that you see the phenomenon—though with less-devastating results—each spring, as deer transition from woody browse to green plants.

“In a spring where green-up comes quickly and dramatically, you’ll see deer with very loose droppings,” he notes. “Their stomach is adjusting to these leafy, water-rich foods it hasn’t had in months. The difference is, they usually have time to make the transition, and the food isn’t there in such abundance. They have to work for it a little.”

Adams completely understands the desire to feed deer when conditions get rough. “It’s the most natural feeling, especially for a whitetail lover, to want to help deer through a rugged winter. We dealt with it every year when I was in New Hampshire, and the worse the winter, the more people wanted to feed. It was a constant education process that, as this case illustrates, is ongoing.”

Though Adams and other professionals say the best idea is to simply not feed deer at all, he said feeding done wisely can work. “The ideal scenario for someone wanting to feed would be to start in November, before the first snow, and not quit until spring,” he says. “And start with small amounts, especially in areas where whitetails aren’t exposed to ag crops. My guess is that if the people in this latest case had just started slow and given the deer time to transition to corn, they might have been successful. But that’s another natural human response; its been a tough winter, the deer are looking bad and acting hungry, let’s pitch as much food at them as we can. Generally, it’s just not a good idea.”