The 10-Minute Rule for Cooking Fish

I shied away from cooking fish for many years. I grew up hating eating fish. But after my tastes matured... 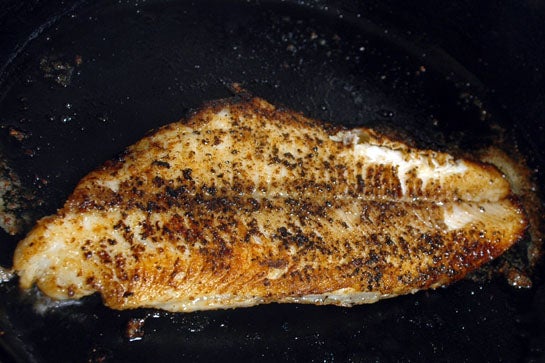 I shied away from cooking fish for many years. I grew up hating eating fish. But after my tastes matured and I realized that finned flesh is pretty damn tasty, I was intimidated to cook it. Then I discovered what’s referred to as the “Canadian Cooking Method” for fish.

First posted by the Canadian Department of Fisheries in its 1959 “Canadian Fish Cook Book,” this method was a way for the department to demystify the process of cooking fish and, hopefully, sell more fish. Here it is as it was printed:

– Measure the fish at its thickest point. If the fish is stuffed or rolled, measure it after stuffing or rolling and then time it accordingly.

– Cook fish 10 minutes per inch, turning it halfway through the cooking time. For example, a one-inch fish steak should be cooked 5 minutes on each side for a total of 10 minutes. Pieces of fish less than 1/2-inch thick do not need to be turned over.

– Add 5 minutes to the total cooking time if you are cooking the fish in foil, or if the fish is cooked in a sauce.

– Double the cooking time for frozen fish that has not been defrosted. Use this rule as a general guideline since fillets often don’t have uniform thickness.

The 10-minute rule has its exceptions, but overall, it’s a pretty good guideline. No matter what cooking method you’re using – frying, sauteing, baking – it all works. Of course, after you use it a few times, you’ll get a feel for how to cook any fish perfectly and won’t have to follow the rule to the letter. Until then, consider the Canadian Cooking Method and eat more fish.