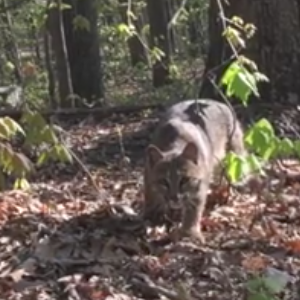 On April 29, 2015, Kevin Walter, of Manassas, Va., was turkey hunting when he called in more than he bargained for—a bobcat. You’ve probably seen the footage. In the two years since it was posted, it has garnered millions of views, and it’s undoubtedly one of the most circulated videos among outdoorsmen in recent years. Though widely seen, the video provides little context for what really happened that afternoon.

Walter’s hunt that day started off slow; he couldn’t coax any turkeys into his setup. With afternoon heat falling over the woods, he moved to a ridge where he thought he might find turkeys enjoying the midday shade. Instead, he saw a bobcat, unwittingly headed up the same trail he was on. “I’ve seen coyotes and fox in the area before,” Walter said, “but never a bobcat.”

Walter got out his camera and started recording. Trying to see how close he could draw the bobcat, he made squirrel noises with his mouth, as he recorded video with his phone all the while. The bobcat zeroed in on the phone and quickly closed the distance from 20 yards to just a couple feet. Then it crouched.

Bobcats can grow up to 40 pounds, and they’ve reportedly taken down animals as much as eight times their size. Attacks on humans, however, are incredibly rare.

“As he crouched there looking at me,” Walter said, “I figured he’d soon realize I was a person. At no point was I ever expecting him to do what he did.”

Suddenly, the bobcat pounced at Walter. The cat brushed off his shoulder, and then quickly bounded off, realizing, Walter thinks, that he wasn’t prey.

Both the bobcat and Walter walked away with no injuries.

Walter made more memories on the same hill later that spring, filling two Virginia turkey tags. In the two years since the run-in, he has yet to come across another bobcat.

RELATED: Rare Footage of a Mountain Lion Taking Down a Deer