How to stage a point-blank, can't-miss hog hunt with your bow—and some bait 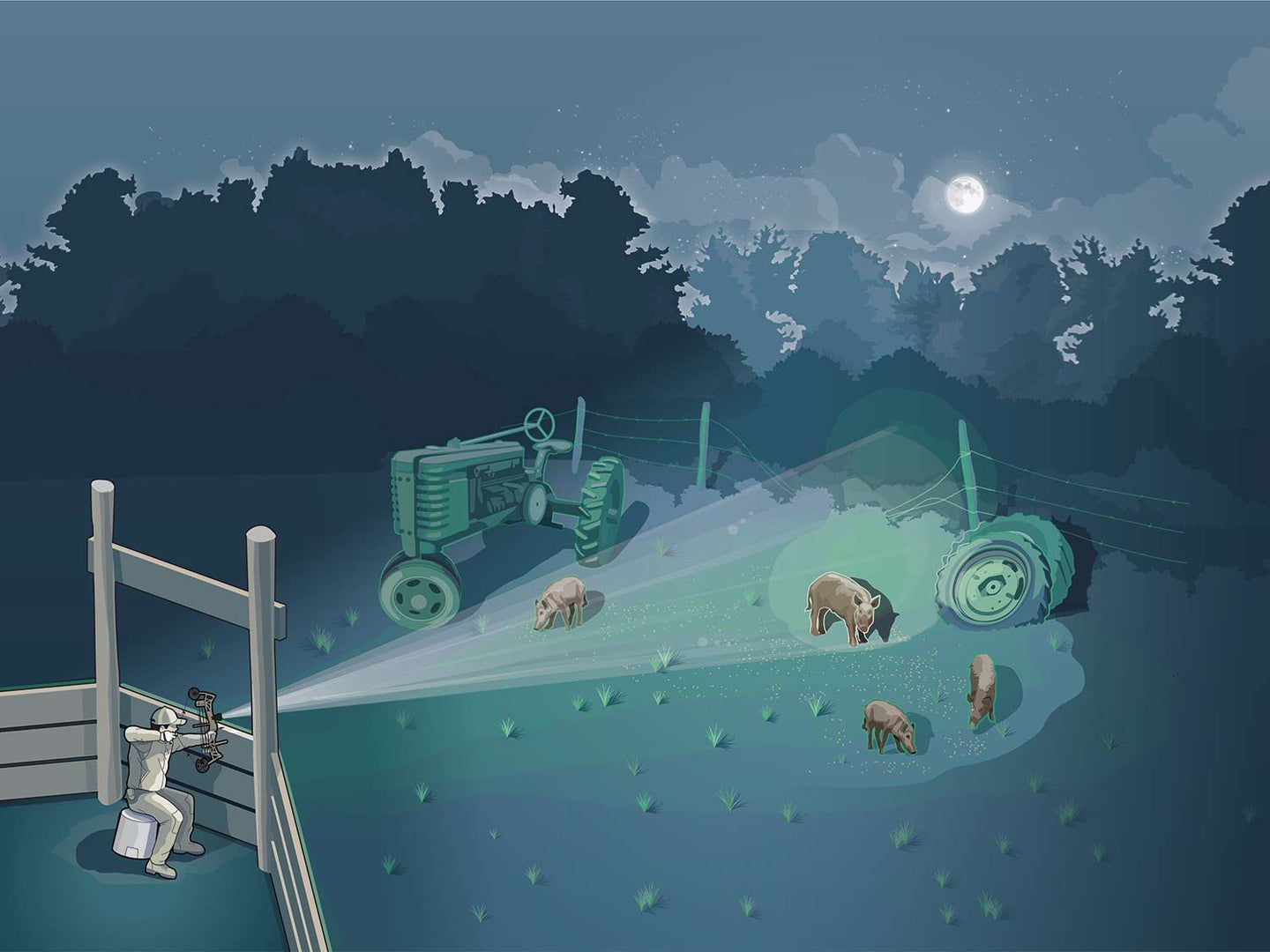 Summer days burn hot in Florida, South Texas, and other piggy places. And there are only so many fish you can reel in before you’re ready to shoot something. Might as well find a good farm, nestle in among the cow pies, and sweat it out until a hog trots past.

Feedlots and active cattle pastures are good places to hunt pigs in the dark. Hogs are opportunists, and they’ll mix in with cows to clean up spilled grain. (I’ve seen entire sounders climb right into feed troughs.) There’s always water and usually plenty of mud too. Fresh rooting will tell you if pigs are around, but if you really want the scoop, just ask the farmer. Most ranchers won’t be crazy about gunfire around their livestock at night, but there’s a good chance they’ll grant permission to bowhunt if you promise to be careful not to pierce a heifer. Here’s how to do it—the pig-hunting part, that is.

Your standard whitetail-hunting bow or crossbow will work just fine on hogs, but you need to add a good predator-­hunting light, with a switch affixed to the bow’s grip. A headlamp won’t work; you’ll throw a shadow of your bow onto the pigs and scare the hell out of them. Most night hunters prefer a colored beam—green or red—though I’ve killed hogs with a white light. I have a Night Eyes gun light that’s served me well clamped to a crossbow scope or a round bow stabilizer. Sniper Hog Lights also sells a good setup that mounts directly into a compound bow’s stabilizer port.

Most cattle lots afford junk aplenty—panel fences, tractor tires, old barns, and ­corrals—​to hide behind. If not, just cut a little brush and make a simple blind. You’ll be hunting in the dark, so the only real requirement is staying downwind of the pigs and being comfortable enough to sit for several hours. You also need a bag of shelled corn. If the pigs are feeding in a certain spot each evening—say, near a feed trough—sprinkle some corn next to that. Then make a line of it leading right to your best shooting lane and pour out the entire bag in a pile. At some point during the night, those hogs will wind up right there.

3. Shine the Light and Shoot

Don’t waste battery power or risk giving yourself away by scanning for pigs with the light. When they come, you’ll hear them squealing, grunting, and with a little luck, munching on the shelled corn you’ve poured out. Good binoculars and a little moonlight should allow you to see their silhouettes as they work closer. By the time they move into bow range, they’ll be loud enough to stir the dead. Cast your light beam into the sky and gradually bring the halo edge of it down to the pigs, to where you can just see them. If they tense up or bolt, don’t move—they’ll come back to the corn. Once they settle back in and the porker you want quarters slightly away, draw your bow and hit him with the full light beam. Arrow him through the heart, and start planning the next night’s barbecue.