The Mystery of Fire

Is it an everyday tool or an instrument for forging heroes? 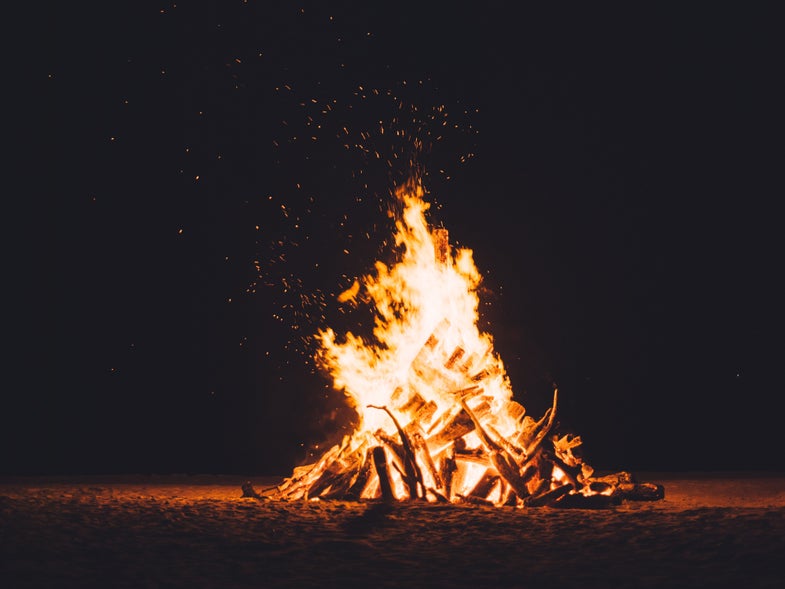 Which of the following is something you will never hear a man say?

(B) I’m actually a lousy driver.

While all are unlikely, only (C) is a genetic impossibility, overriding the DNA inherited from countless generations of our fire-making male ancestors. In fact, should you ever hear a man say that he is anything less than the best fire builder he knows, examine him more closely. He is probably a woman. Man’s acquisition of fire—usually by theft, often from the gods—is a theme in mythologies worldwide. And not solely because one publisher puts out all those mythology books, although that’s part of it. No, the truth is that fire speaks deeply to men’s souls. It’s just that we have no idea what it’s saying. This is also because we’re men.

We’ve been making fires for 700,000 years or so and the skill remains key to establishing the male pecking order outdoors. On a fishing canoe trip, I once watched three men from the same family argue for an hour over starting a fire. Alone, each could have kindled a blaze in minutes. But it’s not sufficient to show that your method works. It’s equally important to show that nobody else’s has a chance. This can take a while.

My personal love of fire dates to the Christmas when Dad brought home some magic dust. A handful tossed into the fireplace instantly turned the flames marvelous colors—blue, green, white, purple. I couldn’t have been more than 4, but I knew this was the greatest invention ever. Dad would pour some in my palm. I could make the fun last by feeding it in gradually or detonate an explosion of color with the whole handful. I never hesitated. It was always the full load. For a few glorious seconds, I became a god of fire.

Dad taught me to build tepee-shaped fires. “Fire likes to go up and down, not side to side,” he said. It drove him nuts when the cleaning lady swept the fireplace bare. A good bed of ash is the best foundation. He infused me with these and other views, including disdain for grilling over anything other than charcoal or actual wood. The invention of “firestarter” briquettes was one more sign of Western civilization’s moral slide into propane. “Who wants a steak that tastes like lighter fluid?” he said. It was years before I learned that in his own boyhood he had accidentally burned down the auditorium at a dance at a girls’ school. The hall had been chilly and the papier-mâché logs in the fireplace looked real. Dad was never big on asking permission—another trait I inherited. He was cold, he had matches, and someone had laid a fire. The incident did teach him an important lesson, though. ­Papier-​mâché burns like nobody’s business.

Because I’m endlessly curious about fire, other people’s lack of curiosity always surprises me. Recently, at a cookout, the host had gotten one edge of the coals to catch but couldn’t persuade the fire to spread. Being male, he declined my offer to assist. Being both male and hungry, I found a fan and an extension cord, set the fan up 18 inches from the kettle, and cranked it to high. I had to apologize to several people downwind for blowing ash into their drinks, but the fan accelerated the fire such that we were sitting down to dinner within 20 minutes. My friend said, “I’ve never seen anybody do that.” This was as close to thanks as could be expected. Actually, I’d never seen anyone use a fan like that either. It just stood to reason.

It turns out that a lifelong fascination with fire may be a comparatively recent development. Evolutionary anthropologist Daniel Fessler writes that in societies where fire-making is a daily chore, children master the skill by 7 or so. From then on, according to this overeducated killjoy, fire gradually loses its allure and becomes another tool. I don’t like this idea. I especially don’t like that he may be right.

In Africa, I saw two memorable fires that may confirm this. One was a small, hot fire made for cooking a fish dinner on a beach. It flared up nearly instantaneously, reached and maintained the temperature required to cook the fish perfectly and—as if knowing its work was done—died almost immediately. In a Maasai village fenced in by sharpened poles to discourage lions from snacking on the cattle at night, I visited a hut with a dirt floor and a raised fireplace where the last night’s embers glowed faintly. The fire had not been abandoned. It had been casually but expertly banked, the coals precisely spaced and covered with ash. I understood that it would stay in this state until it was rekindled that night. Banking a fire is a demanding and underappreciated art. This was the work of a master.

So the anthropologist may be right. Personally, I don’t want fire to lose its mystery. I don’t want the magic explained. Every fire I make is the first one—new, different, experimental. Sometimes, even what looks like a perfectly laid fire won’t light. So there’s always a wonderful uncertainty as I scramble to place twigs where the flame is hungriest until the fire does catch. When it does, when I’ve once again made this living thing, for a moment I’m both boy and hero, the child transfixed by the quivering flames at Christmas, and Prometheus, who stole fire from the gods.

RELATED: 10 Fires Every Outdoorsman Should Master