The Bear at Last Light

After an unsuccessful week at black bear camp during the spring season, the author returned to Manitoba the following fall for one more crack at filling his tag 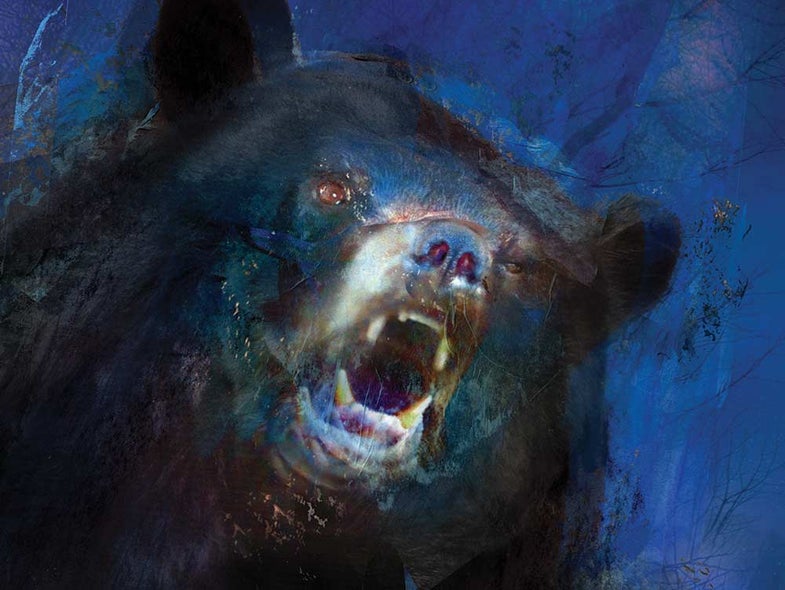 Black bear woods—a half hour after sundown and a quarter hour more since the rifle crack. It is dark. The only glow for miles, besides three lamps sweeping for blood, are two headlights from a revving UTV behind us. The threat of a wounded bear in these woods keeps us from walking too deep; none of us dare tread beyond the reach of the vehicle’s shine or hum. I stop often to look back and listen. The shot felt good, I remind myself. Keep going. But doubt and fear creep in after each step and every second that passes with no trace of encouragement that I’m on the right track. We search as far as we’re willing for the night, then turn back toward camp. We’ll look tomorrow, when there’s light.

Five of us return to the spot the next morning: Jake Edson, a communications manager for Vista Outdoors, three guides, and me. After I describe how the bear reacted to the gunshot and indicate the direction it took into the bush, we split up and hunt for blood. There’s none where I last saw the bear standing, none at the point where I watched it vault and vanish into the woods. I walk deeper, wishing at any second to discover the bear or hear shouts from the others that they’ve found what I cannot.

I’m running out of time here. This morning—as we search for my bruin—marks the last day of our bear camp. Vista had invited a crew of outdoor writers to Narrows West Lodge in Manitoba for a week of spring hunting. As camps go, bear camp is about as leisurely as it gets. You don’t hunt till the evening, which means you can sleep in and enjoy a late breakfast; in the afternoons, you jig for walleyes and pike, then maybe sneak in a nap before a guide drives you to a stand.

Speaking of guides, you’d have a hard time finding a crew that’s nicer, harder working, and more fun than the guys here. There’s Wayne, Dwayne, Mike, and Blair, the owner of the outfit. Blair’s guiding me this week. He is as big as a bear himself and has one of the baddest handlebar mustaches you will ever see. (One day, he wore a T-shirt his friends had made for his birthday. It read: THE MAN, THE MYTH, THE MUSTACHE.) When we come back to camp after our hunts, usually between 11 p.m. and midnight, we all hang out in the shed, indulging in some late snacks and beer or Canadian rye and laughing as the guides make fun of one another. The shed is also where the guides skin and butcher. Over the first three nights of camp, four hunters brought back bears. On night four—the night I fired—three more filled their tags, making me the only hunter not to come back with a dead bear.

My hunts, though, haven’t exactly been eventful. I didn’t see a bear until day three—and even that one, not for long. The bear emerged from a patch of poplars to my left and was aware of me before I noticed it. As soon as I did, I experienced the most intense reaction I’ve ever had to being in the presence of a wild animal. My chest swelled with a pounding heart to the point where I was practically wheezing. My teeth seemed to sweat iron. The bear moseyed within 15 yards of my stand, then stopped and stared at me. I returned its gaze, trying to stay calm. The face-off didn’t last a minute before the bear sprinted away.

When my hands no longer shook, I took notes. What struck me most was the breathtaking silence with which the bear had appeared. Littered everywhere here are dry sticks and leaves and deadfall—objects that should’ve cracked under the weight of a beast with teeth and claws, alerting me to the approach. Instead, the predator made its own stalk. One moment, the area I was hunting was empty; the next, it felt as though I’d trespassed onto the bear’s land.

Meanwhile, when the bear woods darken, everything else seems amplified. Ravens’ wings pulse overhead. Red-winged blackbirds flutter into the bait and pick at the molasses-soaked oats. Field mice rummage beneath dead leaves. Wolves howl. But the one constant, the soundtrack of my hunt—something I hear, and look forward to, every night—is the mating call of a male ruffed grouse. The drumming sound—the way it starts slow, then rapidly picks up speed—is so natural that it’s almost internal; the first few times I mistake the vibration for my own heartbeat, quickening with the hope that a bear is near.

I hear shouting. “Colin!” I rush toward the noise, hopeful that when I come through there’ll be a bear. “Colin!” I hear the revving UTV. I emerge through the bush, finally, and try not to seem or sound too hopeful. “Any luck?” I ask. They shake their heads. Not a drop of blood found. Edson opens a hand. In his palm are a few small black hairs he found near where the bear stood when I fired. The ends of each look shaved.

“I think you missed him low,” he says. “Gave him a buzz cut.” The guides agree with him, and although there’s no way to be certain, they believe I cleanly missed. “The good news,” Edson adds, “is you get to hunt again tonight.”

The last stand I hunt is nicknamed the Zoo because it’s known for attracting so many bears. But as I walk to the barrel, I can tell already that tonight’s conditions won’t do me any favors. Strong winds shake the canopy of poplar trees back and forth, side to side. Bears don’t tend to move on nights like this; the gusts play tricks on their noses. Sure enough, not one bruin comes in to the bait. Toward the end of last light, a grouse drums. This time, though, the sound feels less like a heartbeat and more like a ticking clock, awakening me to the realization that my time here is up.

Back at camp, the guys seem as disappointed as I am. “That’s just how it goes sometimes,” I say. I pour myself a rye and fix a plate of fried walleye. That’s when Edson walks up. “Your bear tag will still be good in the fall,” he tells me, “and we’re coming back here in September for a goose hunt. Why don’t you come? Shoot birds in the morning and hunt bears in the evening. Could be fun.”

I’m grateful for the invitation but not ready to commit just yet. “Let me think on it,” I say. But before I even land at home, I’ve already made up my mind. I email Edson: “If there’s still a spot open, I’d love to join you guys.” I want one more crack.

Except for the leaves, which have lightened from spring green to autumn gold, it’s as if nothing’s changed since I left. The Narrows lodge is still comfortable and inviting. The guides are still a gas to be around. The woods are still quietly wild. And a bear still has the gift of emerging from nowhere.

I turn my head and see him. He approaches with caution. He reaches the bait and stands up, resting his front paws on the top of the barrel. But then he suddenly backs off and walks away, never giving me a clean shot. Either he doesn’t like something about me, or he senses a bigger bear—the one that recently freshened the area with massive tracks—nearby. I hope for the latter, but I never see another bear all night.

Night two I’m back at the Zoo, and like my last stand here, the conditions aren’t ideal. Winds howl and swirl. Not one bear appears.

Dating back to spring, I’ve had just three bear sightings in seven nights of hunting. I’d hoped to see more; what excited me most about hunting bears in the first place was simply the opportunity to watch these animals. By now I’ve come to accept that this hunt might not pan out. Which is O.K. There are worse ways to spend seven evenings than enjoying them in the woods. Not to mention, on this fall trip, our morning goose hunts have been check-this-experience-off-your-bucket-list good. Flock after flock of Canadas pour into our decoy spread, and limit by limit, they tumble into the field and land with a thump that is morbidly gratifying. When your day starts with that kind of action, it’s hard to feel sorry for yourself when your day ends with an unpunched bear tag.

But there’s still time. I have one night left.

After I’m settled inside the blind, a grouse drums in the woods behind me. It’s the first time I’ve heard the call this trip—no surprise, since it’s not a fall ritual. The sound carries me back to spring, and doubt suddenly floods my thoughts: I go home early tomorrow morning, and to catch my flight I’ll need to leave the lodge before sunrise. If what happened last spring happens tonight—that is, if I fail to make a quick kill and the bear runs deep into the bush—I won’t be able to join the guides as they search for the bear. I’d rather pass on a chip shot than not be there to help. I gaze at the bait through the shooting window. A part of me hopes no bear will appear.

At 6:14 p.m., I look up and see him. He crosses a meadow, and when he reaches the bait, his spine shows above the top of the barrel—a measuring cue that you have a big bear in your sights. He licks molasses off the top of the barrel, then plops to his belly and munches on the spilled oats. The barrel is between the two of us, so I have no shot. He gets up a few times, then drops back down. Several minutes pass. I have my gun ready, but my eyes are away from the scope. For the moment, I just enjoy watching this bear. Then he stands up and walks in front of the barrel. He turns around and stops. His head is behind the barrel. His left shoulder is broadside and vulnerable. I watch him for a moment longer and make up my mind. I peer through the scope.

Everything’s quiet again. Thirty-six yards away, the bear rests motionless by the barrel. The guides advised me to stay inside the blind till they arrive, but I can’t. This moment’s mine. I approach the dead black bear in the darkening meadow.

On my knees, I run my hand through the fur on his chest. I lift the gums to stare at his canines. I touch the tips of his claws and feel the roughness of his pads. I say something, between me and him, before I rise and walk back to the blind.

Light is fading fast; by the time the guides arrive it’ll be dark. I take notes as I wait, listening for the UTV, glancing up occasionally to check for the glow of its headlights. In the woods to my left, one last time, a grouse drums. Before the sound strikes my ears, I feel it in my chest.

My miss in the spring, it turned out, was due to a bumped scope. Once the gun was sighted in, it was a true tackdriver.

This stuff is powerful and damn impressive. My first shot shattered the bear’s shoulder, dropping him flat.

The illuminated reticle on this scope was a gift; black crosshairs on a black bear aren’t so easy to see.