This time of year, no one gets more largemouth action than the good ol’ boys in the South. Their tactics will help you catch more early-spring hawgs in your neck of the woods 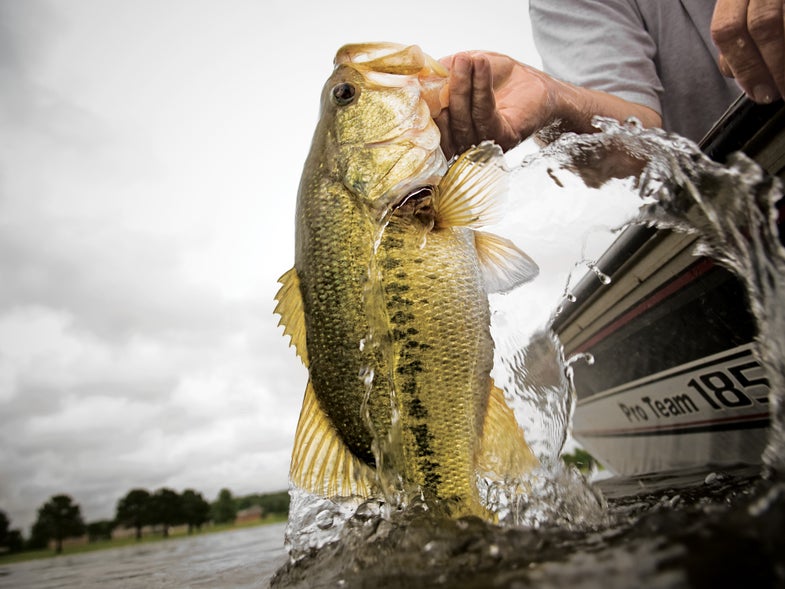 There are some skills Southern kids learn early, like cooking and good manners. They’re also quick to ditch the Snoopy rod and get comfortable using a baitcaster. The roots of many of the most popular bass fishing techniques used throughout the country can be traced back to the South, and for good reason: More top-notch bass fishermen live here than any other place in the country.

In the South, when the water hits 50 degrees in February, big bass are on the move. So we talked to five of the best Southern bass anglers about how they intercept these lunkers. They may look for similar patterns—warming water in a shallow area, preferably with some vegetation—but their tactics are all very different. No matter where you live, no matter when spring starts, these tips will help you score.

Romeka (904-291-8052) has been guiding since the 1980s for both bass and inshore saltwater species on the St. Johns River in northern Florida.

The Spot: “Some bass will be on the spawning beds by February, but if they’re not, they’re at least roaming the flats, looking for suitable locations. I fish grassbeds that are in close proximity to deep water, like a river or creek channel.”

The Technique: “In February, I like to do a controlled drift over the weeds with big live shiners. Depending on how many guys are in the boat, we’ll be running four or five rods. All the shiners will be 2 feet below a cork except one, which will be free-lined. I just keep the boat moving slowly with the trolling motor, working both the flat and the edges of the channel. If you don’t catch a 7- or 8-pounder, you haven’t had a very good day.”

The Tackle: “I use 71⁄2-foot medium-heavy rods and reels with bait clickers. They’re spooled with 30-pound braid and topped with 20-pound fluoro­car­bon. We leave the clickers on so that a bass can take a shiner in free-spool without backlashing the reel.”

The Bait: “I hook shiners through the bottom lip and out the top lip with a 5/0 worm hook. I don’t use any weight. If I get short strikes, I’ll clip one tail fin off to make it easier for bass to catch.”

Burks (bassinadventures.com) has been a guide for more than 20 years on Lake Guntersville in Alabama, one of the top bass lakes in the country.

The Spot: “When you start getting some sunny, 50-degree days with no wind, bass move up shallow in a hurry. I search out the warmest water I can find. I like it to be clear, and if there’s some emergent grass, I’ll find fish. Usually, these stars align on a shallow flat, often around 4 feet deep, not far from a creek-channel swing.”

The Technique: “One of my favorite ways to catch bass over weedbeds is with a jerkbait. I make a long cast and fish it slow. Twitch, twitch, and then let it soak. Having the patience to fish slow is the key. This is light-tackle fishing, but it works for big bass. I’ve caught 91⁄2-​pounders like this, but you can’t panic when a big one bites. Let the drag do its job, and take your time.”

The Tackle: “Usually I use a 7-foot medium-­action spinning rod with a fast tip section and 8-pound-test fluorocarbon line. That allows you to still make a nice long cast, but it’s also forgiving when you have a big fish on those little hooks.”

The Lure: “I prefer a smaller jerkbait, such as a Lucky Craft Live Pointer 110 or a 3-inch Pointer 78. I take markers and add chartreuse to the back or darken its sides. This is just to give it a little different look than the other guys’ lures.”

Looper is a lure designer for Booyah and a monster bass fanatic. His largest fish to date weighed in at 14.41 pounds. Most of Looper’s trophy catches come from smaller lakes near his home in Hackett, Ark.

The Spot: “My favorite time to catch big bass is at night in late February. I ­focus my attention on shallow, flatland lakes this time of year because they warm the fastest. I’m looking for weedbeds, especially isolated ones. There may be a continuous stretch of weeds 100 yards long, but I want to fish the one section of weeds isolated from the rest. It may not be any ­bigger than the kitchen ­table. Ideally, there’ll be a channel that swings in close to it.”

The Technique: “As much as I can, I fish around the full and new moons. I like to be fishing my best spots in the hour before and after the moon is either rising or setting. I prefer cloudy nights with some wind to break up the surface a little. I’m hitting isolated weedbeds with a jig from every angle, and if it’s in the middle of the bay, I may come back and hit it several times during a trip. When a big female is feeding, she’s on the move. She’s not just sitting there. You may intercept her at any time.”

The Tackle: “I like a heavy-action 6½-foot casting rod and reel with a 7:1 retrieve rate. Big bass swim more quickly than small ones, and that fast reel makes a huge difference when fighting them. I use heavy line—25-pound mono or heavier—whenever I can get away with it.”

The Lure: “I’m a jig freak. I particularly love swimming them if it’s warmer and the fish are aggressive. But early on, when the water’s cold, I’ll fish them slowly, too. To me, a jig should take either five minutes or 30 seconds to get back to the boat.”

Collett (956-765-4616) grew up on the shores of Falcon Lake and has fished it his whole life. Today, he’s the owner of Beacon Lodge, which features one of the best-known guide services on Falcon.

The Spot: “By February, I’m fishing all stages of the spawn. Those big bass will be on the creek-channel drops in the bays. They hold in similar areas before they spawn and after they drop their eggs. I target the ledges next to flats and start out throwing a crankbait and covering water quickly until I find them. The bass may be in deeper water toward the mouth of the bay, or way up in the shallows at the back. It’s just a process of elimination.”

The Technique: “If you catch a few smaller fish on a crankbait, it’s time to slow down and start dragging a football jig or slow-rolling a spinnerbait. That entices the bigger fish in the area, and a single hook gives you a lot surer set than a treble.”

The Tackle: “Falcon Lake has a big population of 8- to 11-pounders. Spinning gear just won’t cut it here. I use Shimano casting reels and 17-pound line, minimum, for everything. I throw my crankbaits on an 8-foot medium-­action Shockwave rod, and use slightly shorter heavy-­action rods for the jigs and spinnerbaits.”

The Lure: “Most locals around here, me included, use JoBaby Lures football jigs and spinnerbaits. They’re made with heavy-duty wire and hooks for better durability. Everything I use is ¾ to 1 ounce. I like their junebug color.”

Keith (caddolakefishing.com) grew up on cypress-laden Caddo Lake, which straddles the border of Texas and Louisiana. He’s been a guide here for more than 20 years and spends more than 200 days on the ­water annually, perfecting his techniques.

The Spot: “Caddo Lake is shallow, full of vegetation, and the bottom is just muck. Because they can’t fan beds in the muck, our bass do most of their spawning on cypress trees and laydowns. When that water is 50 to 60 degrees in February and March, they’ll be on the trees in a couple feet of water. That’s where I’ll be, too.”

The Technique: “I am always looking for the dark side of the trees and usually throw a weightless soft plastic at them. If the sun’s bright, I throw to the shady side. I don’t work the lure all the way back to the boat. If I don’t get bit pretty fast, I reel up and cast to the tree from a different angle. A buddy of mine set the lake record two years ago fishing like this. That bass was a 16½-​pounder.”

The Tackle: “I’m not a guy who uses five different rod types and actions for five different baits. A 6½-foot ­medium-​heavy baitcasting rod and reel with a 6.3:1 retrieve ratio works fine for about everything I do. Spool up with 15-pound mono and you’re good to go.”

The Lure: “I like something with a slow fall, usually a Zoom Fluke or Senko-style plastic. My personal favorite is the 5-inch V&M Chopstik rigged on a 4/0 Bass Pro XPS O’Shaughnessy hook. Those baits are a lot more durable than similar soft plastics, which means I can catch a lot of fish on one, but they can also stand up to the heavy cover I ­frequently target.”