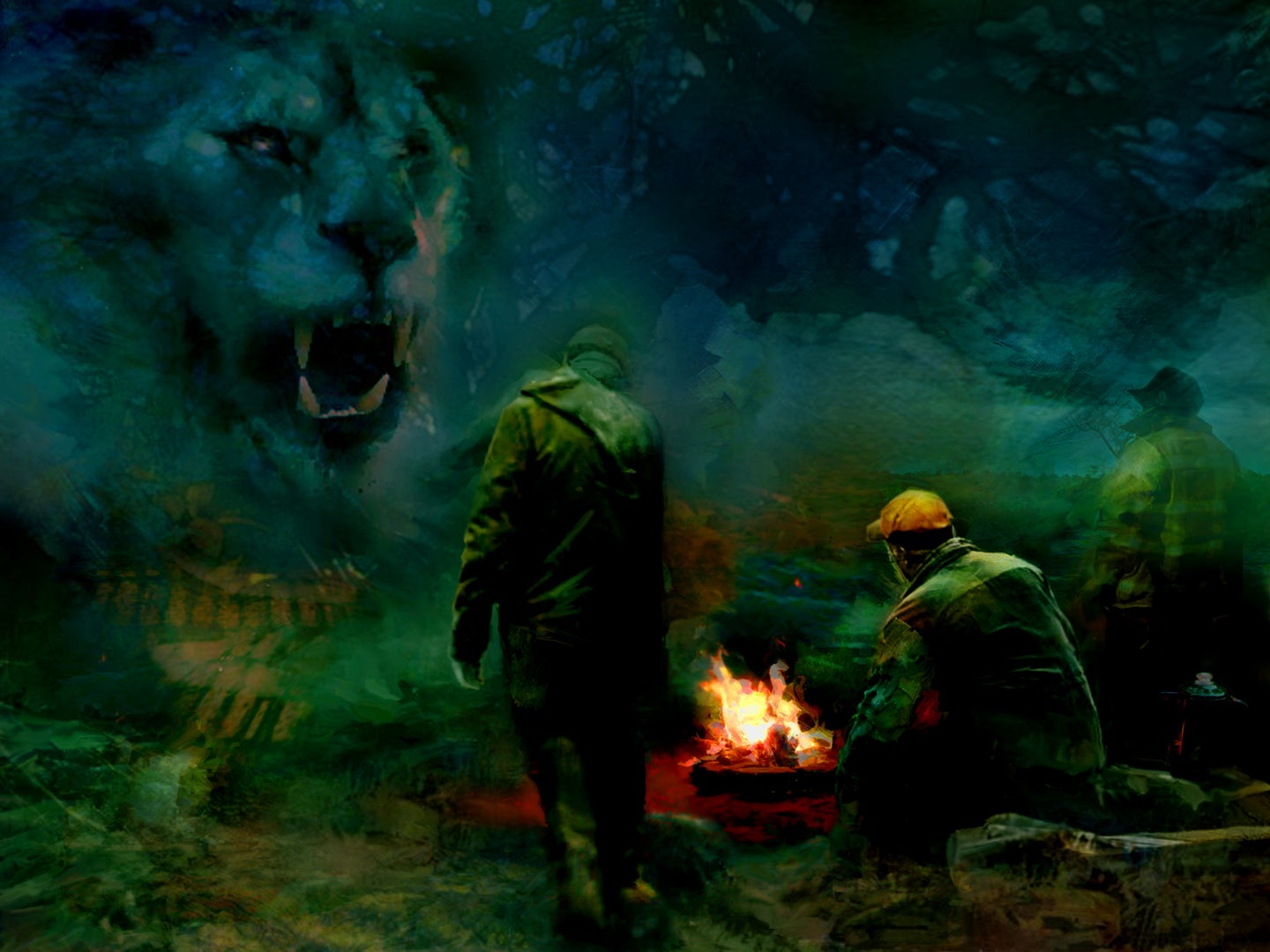 Over his decades in the outdoors, the author has enjoyed the warmth and comfort of countless campfires. Here are some of the most memorable

IN 1897, a group of hunters, anglers, and explorers who loved the wilderness, but whose professions confined them to the New York City area, decided to organize themselves into a club. They were a highly educated and literate group of men, and when they looked for a name that summed up everything they cherished in the outdoors, there was only one real choice. They called themselves the Camp Fire Club of America.

Humans have been staring into campfires for at least 400,000 years. The more likely figure is a million years plus. Campfires are hard-wired into our brains. When you build one and see that first real, solid flame shoot up, you feel a mixture of triumph and relief that could have been understood by a Homo neanderthalensis: If you could get a fire going, you had a chance to survive the night. If you could not, something would probably be gnawing your bones come daybreak.

Being able to build a fire—or not—can still have life-or-death consequences. Hypothermia has replaced the cave bear, but it is just as lethal.

Survival notwithstanding, the campfire is both mesmerizing and useful. You can stare into it, tell stories around it, use it to cook, to dry out your wet clothes, to drive off bugs, poke at it, and finally pour water on it with a vague sense of sorrow, because, depending where you are, you may never see this spot again.

At age 10, in 1952, I was sent away to a summer camp in Maine, where we were taken on serious camping trips. We got into real wilderness and learned all about campfires. Since then, I’ve marked my time in the outdoors by a series of them. Here are some, including wood stoves, because after all, what is a wood stove if not a campfire surrounded by steel?

Rural Africa still runs on campfires, and nowhere else is the smell of a hunting camp so characterized by wood smoke. Even fancy, permanent safari camps have concrete fire pits where every night a blaze is lit and people can gaze into the flames and tell tales.

This campfire was at the opposite end of the spectrum. It served a tent camp that had been set up at the last minute at a place called Phuduhudu in Botswana in the Kalahari desert.

Like all African campfires, ours was free-form. In the United States, you can build a teepee, platform, star, lean-to, or log cabin campfire. Africans would laugh at this. They pick up whatever wood is lying around and drag it into camp. Then they get a diminutive flame going and throw on whatever seems to make sense without any regard for shape or form. It burns superbly, because African firewood is the best in the world: bone-dry, long-lasting, hot, with little smoke, and producing wonderful embers. But you never chop African firewood. It’s as hard as iron, all of it. If you have an overlong log, you throw it on the fire and let it burn in half.

Our master of ceremonies at Phuduhudu was a South African PH named Ian Manning, who was the best campfire regaler I’ve ever listened to. Ian was highly educated, spoke very proper British English, and was a master of the insult, which is an invaluable skill to bring to a campfire.

At Phuduhudu Camp you could come fairly close to the prehistoric experience, sitting by the fire in the evening chill, trying to recognize the unfamiliar constellations blazing overhead, and regarding the eyes glowing back at you from the darkness. Probably most of them belonged to hyenas. Certainly there were lions present. Our camp did not have a boma, or thorn fence, around it, so were it not for the fire blazing away, anything that wanted to stroll into camp could have done so. This is the way it worked millennia ago—except that those folks didn’t have rifles in their tents. It made you appreciate campfires.

The Bangtails are a modest mountain range located in Montana roughly between Bozeman and Livingston. I hunted elk there on horseback in the late 1980s and did not get one. I did, however, get a taste of weather so cold it required us to build a campfire or get into trouble.

I already had some years of Montana hunting under my belt and had been in cold weather before, but this morning was different. I remember riding along a ridge in the darkness, praying for the sun to come up. It did, but it didn’t help much. The temperature must have been way below zero.

The fellow with whom I was hunting was a native Montanan and very experienced in the outdoors. It was he who signaled to stop and dismount. “We’re going to make a fire,” he said, “it’s just too goddamn cold.”

He had obeyed the Primary Directive of the Campfire. If you take a chill, you have three hours in which to get warm again or you will become hypothermic. You’ll lose your ability to understand what’s happening to you, and with it your ability to save yourself. (Read Jack London’s classic short story “To Build a Fire.”) What you want to construct is not an average campfire, but a big one. You’re not making tea; you’re generating enough heat to get rid of the shakes.

The Bangtails are a dolorous place in winter, a gloomy mixture of ponderosa pines, massive boulders, and snow, with no sound but the occasional caw of a crow. My friend admitted that those mountains scared the hell out of him, and if you could not start a fire there, your odds of survival in cold weather would be nil.

But he could, and did, and this seems a good place to pass along what I know about campfires. I’ve been building them for 70 years, and I’ve watched other people do it, and, as a member of the aforementioned Camp Fire Club, I have had to get a fire going while being timed by a stopwatch and with a limit of three kitchen matches or face dishonor and ridicule. I took this test twice a year for 25 years. Here’s what I can tell you:

Before you strike your first match, assemble everything you’re going to need, from tinder up through night logs.

Fires love attention as much as they love oxygen, and if you wander off looking for something to burn, your fire will go out while you’re absent.

If you’ve never built a campfire before, I wish you the very best of luck, because you’re going to need it. You may have read up on the subject, but actually doing it is quite different. After you’ve successfully built a couple dozen fires, including some in the rain and snow, you can consider yourself qualified.

If you want to start a fire with a bow drill or a flint and steel or a car battery or the magnifying glass on your Swiss Army knife, have at it. My fire-making kit, which I refer to as my bag of magic tricks, is an arsonist’s dream. At last count, I had six means of making a fire stashed in it, and I don’t consider this overkill.

A horseback hunt is filled with wonderful and archaic technology that is unchanged since the Wild West of the 19th century. There is the pack mule, the packhorse, the Decker pack saddle, the diamond hitch, the white-canvas wall tent, and the sheepherder stove, which lives inside the tent and makes life in the wilderness not only bearable, but comfortable.

What has this to do with campfires? I regard a sheepherder stove as nothing more than a campfire with a steel box around it. The stoves feed on firewood, and you have to know how to light them up, and if you hunt a lot, you’ll probably see as many sheepherder stoves as you will campfires.

Why “sheepherder”? My guess is that because sheep stay in one place until they’ve destroyed the pasture, the people who kept track of the brainless beasts were able to live in tents, unlike cowboys, who had to follow cows around and sleep on open ground. Therefore, they had the luxury of tent stoves, and the stove that bears their name was simple, light, portable, and efficient.

A sheepherder stove consists of a steel firebox of about 24x12x12 inches, legs for it to stand on, and a pipe that goes up through the roof of the tent. Most of them load through the top. Ashes come out through a door in the front, and some have things like compartments for baking and water heaters on the side. I view these as distractions. The true purpose of a sheepherder stove is to heat the tent. The camp cook has a more elaborate, and bigger, wood stove.

A well-stoked sheepherder stove is a miracle of efficiency. I’ve been in canvas tents that were so warm you had to take your shirt off to be able to stay in them. Outside, the thickness of a piece of canvas away, it was so cold that if you had to sleep there you’d freeze to death.

But the sheepherder stove is not perfect. It will hold its heat for only three to four hours after its fire goes out. This means that the tent is going to get good and cold before you get up at zero-dark-thirty, and that some brave soul is going to have to get out of his sleeping bag and build a new fire.

One of my most wonderful hunting memories is of lying in a wall tent with a half-hour before we had to rouse ourselves, listening to the camp cook at work in her tent, making breakfast. I could smell coffee and bacon and hear her singing along to a country music station in her sweet voice. In 30 minutes, I would have to lurch from my sleeping bag and light the sheepherder stove because the guy sharing the tent with me was no good at it, but that was all right. And what lay ahead was another day of cold and suffering, but that was all right too.

I still had those 30 blissful minutes ahead of me.