I’d make a lousy reality TV contestant, but luckily there are other options 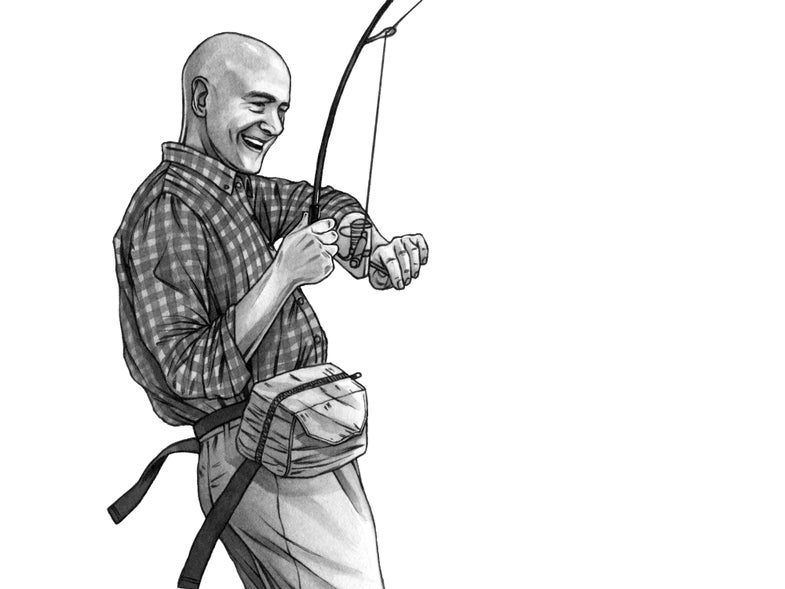 American dominance of the universe is under siege. Major League baseballs? Made in Costa Rica. Levi’s jeans? Ninety-nine percent come from 35 countries, none of which were made in the U.S.A. Remember the Radio Flyer wagon in which you towed your little brother up the street before aiming him at the neighbor’s rosebushes? Made in China since 2004. But despair is not in the American DNA. We still make the world’s best fighter planes and fried chicken. We lead the world in daily consumption of both sugar and television, at a quarter pound and five hours, respectively. Beat that, China. Best of all, bass fishing accounts for an ever-larger part of those five hours.

I recently sat down and sampled episodes of Major League Fishing, the monster hawg currently revolutionizing the genre. MLF’s genius is the same one I’ve relied on all my life: a keen grasp (occasionally) of the obvious. Basically, its creators realized, bass TV has had everything bass-ackwards. Instead of trying to design a TV show to cover existing bass tournaments, why not design a tournament around TV? And what TV does best, as reality competitions like Survivor and The Apprentice have proved, is to show people at their worst, like when they’re trying to crush one another in competition, especially competition they don’t completely understand.

So that’s how MLF works. Contestants don’t know where they’re going until they arrive at the ramp. They get 15 minutes to scout. Then it’s go time, baby. Deadlines always help goose drama, so each day is divided into three periods. And a helpful MLF official in your boat tells you each time a fish is caught so you’ll know just how little time remains and how far back you are.

That’s already crazy pressure, right? But MLF—by the way, it’s pronounced M‑L‑F, not the word you might be tempted to say—keeps its foot on the gas, super­sizing drama, suspense, and uncertainty at every opportunity. It’s the TV equivalent of Cool Ranch Doritos. Your house could burn down around you and you’d still be on that couch. I can watch footage of tsunamis and children being eaten by feral llamas without batting an eye, but I found myself actually yelling at one angler to stop throwing that wacky-rigged Senko to boat docks and switch to a jig on secondary points unless he wanted to go back to selling pest-control services. “Why are you yelling at the TV?” Michelle called from the basement. “I’m not,” I replied, trying to think of an explanation. “I’m yelling at the guys on TV.” This seemed reasonable right up until I heard myself say it.

The behind-the-scenes stuff is my favorite part. Since the anglers are co-owners of the show, they’re more than willing to play their parts. Driving to the ramp, each emphasizes the terrible anxiety of not knowing the destination. You’d have thought they could end up flyfishing in mermaid costumes from water skis in northern Quebec. Decades of experience does lead to unanimous agreement on one thing: “There’s gonna be a lot of strategy involved in the competition today. And it’s pretty ruthless.” Well, that lets me out, I thought. I don’t do well in situations that involve planning or execution. It’s just not my strong suit. And ruthless strategy? Forget it. A guy could easily get his feelings hurt in a situation like that.

Part of the show’s success is that it never insults your stupidity. Lakeside analyst Marty Stone breaks the news that today’s competition features “a combination of elements that’s going to come into play.” These are aquatic vegetation, boat docks, and rock structure. No angler could have predicted such an unlikely lake. And remember, these aren’t three elements just lying around. They’re coming into play. But the real wild card? Northern lakes often contain both largemouths and smallmouths! Between ruthless strategy, three actively participating elements, and two kinds of fish, I was coming unglued. Fortunately, Marty expertly unpacks things. “The angler that can get dialed in on—​one—​the species and—​two—​the location quickest will be the angler that will advance to the next round.” I, for one, would never have figured that out on my own.

O.K., we’re a good ways into the first period and no one has landed a fish. These northern lakes can be fickle that way. Mike Iaconelli ties into a monster largemouth, 5 pounds 2 ounces, and is catapulted into the lead. He is so pumped he needs a “man hug” from the highly uncomfortable MLF official in his boat. But Ike can’t find a pattern and it’s eating him up. Meanwhile, Shaw Grigsby overtakes him by pulling in five bass that average about 1 pound each. The wily Grigsby, a 34-year pro, wins the first period with 5 pounds 12 ounces of fish.

It wasn’t pretty but it was compelling. I was intent on watching more. But just then Michelle came upstairs and reminded me of my promise to clean the gutters, change the water filter, and mow the lawn. She also said the boys wanted to ride their bikes but couldn’t because all my fishing gear was in the way. It was with the greatest reluctance that I rose from the couch. My personal reality show—which has a cast of one, a viewership of one, and no sponsors—had just preempted a far more telegenic, successful one.

RELATED: Video Games vs. Being Outdoors