Confessions of a Bass Fisherman

No, I’m not obsessed with largemouths. Now please let go of my lower lip 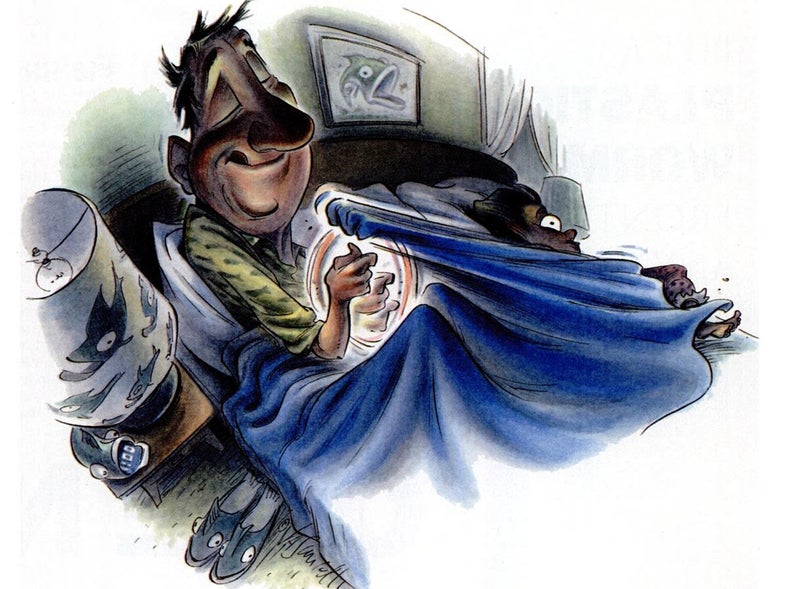 A classic story from the F&S archives.. Dan Vasconcellos
SHARE

Editor’s Note: This classic “Sportsman’s Life” column first ran in the June 2000 issue of the magazine. This is the first time it has appeared online.

I’ve been peppering the bank methodically for a good half hour with a soft jerkbait when I catch something out of the corner of my eye. Thirty yards away, a single stalk in an isolated clump of reeds wags once in the breeze and comes back to attention. Only there is no breeze. And no stray puff of air would do a surgical strike on one reed. “Bass,” I mutter, already stashing the rod noiselessly in the bottom of the canoe and lifting my window-sash anchor. Smooth as a shoplifter, I take up the paddle. Three quiet J-strokes put me in casting position.

The rest unfolds like the money shot in a “Monster Hawgs of Transylvania” video. I throw 10 feet past the target and tease the plastic back like the day’s blue-plate special. The reed bends again. A sudden hole opens in the water. The lure falls down it. And then I’m into him, a bass like I’ve never fought before: too big to jump, too mad to think, too wild to care.

The first surge nearly pulls the rod from my hand. Then he’s dragging the boat up into a cove, the reel is choking each time he bucks, and I’m shaking and reeling frantically in between surges to try and keep up with him. Now his dorsal fin breaks the water, like the conning tower of a submarine surfacing. He looks like a very large fish—only bigger. If I can just hang on I’ll have the bass of my life. He dives, and I’m trying everything I can think of to turn his head when my wife’s face suddenly appears suspended in the air next to the canoe. She doesn’t look happy to see me.

“Stop punching me in the back!” she snaps. “What the hell’s wrong with you?” I wake to find I’m in my own bed, arms pinned in a backlash of nightgown and bedsheets. I have been chasing dream bass again.

Bass fishermen aren’t the craziest people in the world. We do not claim to be the pope, nor that the CIA has implanted tiny receivers in our teeth, nor that we know for a fact that Steven Seagal is a German dressmaker hiding out from his creditors as an action hero in Hollywood. On the other hand, you do not want to get between us and our vehicles when we are sneaking out of work to go fishing. It’s just not a safe place to stand.

Some behaviorists say fishing is a form of obsessive-compulsive disorder. Cast, reel, repeat. Continue until your arm falls off. This is, of course, total nonsense. We will fish only until our arms are so sore we can no longer lift them. This is a big distinction.

Bass anglers will fish at any time, in any kind of weather, on any kind of water. One of my better fish last year came in deepest, darkest Washington, D.C., 20 yards from where half a dozen police cars, blue lights turning the night into a weird kind of funhouse, were haphazardly parked during a major drug bust at Hain’s Point. I’d nailed a 4-pounder along a hydrilla bed on a Tiny Torpedo. One of the beefier cops squinted into the night as he herded men into a paddy wagon, saw my boat, and waddled over to the rail along the river. “Doing any good?” he asked. “I always wondered ’bout fishing here.”

There’s a reason for our devotion. It is this: Once you’ve had a day where it all comes together—when your casts could land on a marshmallow at 25 yards and you sense the fish sucking your lure in right before it happens and they’re hungry for exactly what you’re throwing—you suddenly feel like you’re in exactly the spot you were meant to be, snugly in God’s pocket. It doesn’t happen very often, but when it does, it’s magic. The absolute chaos of your life suddenly makes sense, and you know firsthand that at least one path to grace can be navigated with a paddle, oars, or trolling motor.

And we will lie, if we must, to get to the water. Back before I realized I’d never make employee of the month and quit a regular job to take up the twin vows of outdoor writing and poverty, I spent as much time scheming to get out of work as I did actually working. Chronic ailments were my stock-in-trade. From May to October, I was beset by periodontal disease and sinus infections, sleep apnea, and a back that required regular chiropractic adjustment. These conditions were aggravated by incoming low-pressure systems and the tidal variations of the river I fished.

My boss knew. Heck, the whole office knew. But knowing and proving are two different things. Walking to my car in the lot, I’d be so full of fishing anticipation that I’d have to force myself not to run. It was a heady feeling, to still be on the clock while surfing the crest of the first wave of rush-hour traffic, headed for a place called the Stick-Ups and an afternoon chasing bass. Now that I’m my own boss and can go fishing whenever my wife says it’s okay, I almost miss it. Almost.

Bass fishermen are not, as so often portrayed, equipment junkies. You give me a truck, boat, trailer, depthfinder, trolling motor, lights, GPS, radio, aerator, four tackle boxes, 100 lures, eight rods, and a pair of polarized glasses, and I’m one happy camper. A measly 70 grand would just about do it. Heck, I bet Ray Scott spent that much each year on those fringed cowboy jackets he used to wear at the Classic weigh-in before they gave him the boot. And despite our affection/affliction for gear, we also love knowing that the bass couldn’t care less.

We know what George Washington Perry, the farm boy from Rentz, Georgia, was outfitted with when he caught The Fish, the 22-pound 4-ounce monster he dredged up from Lake Montgomery pond back in 1932. He was using a $1.33 baitcasting outfit and a Creek Chub Wiggle Fish, a wooden lure with glass eyes. He was fishing from a skiff he made himself from 75 cents’ worth of scrap lumber. That fish was very nearly spherical, 32 inches long and 28 inches in girth, only a little smaller than the bass in my dreams.

The new world-record largemouth is more than likely finning its way around someplace right now, scaring the bejesus out of any little 12-pounder that makes the mistake of settling into its hole. I want to be the one to catch it, of course. I want the million bucks in endorsements and the everlasting fame, and I want the world to be mesmerized by how humble I am afterward, thanking Jesus and Momma and my corporate sponsors.

But if I can’t be the one, I hope it’s some boy sitting on a bucket with a bobber and a worm, some kid who had to stay behind because there wasn’t enough room for him in the boat. That might be the best thing to ever happen to modern bass fishing.