If enacted, the Clean Water Act protections would help preserve the world's most prolific sockeye salmon fishery for the long haul 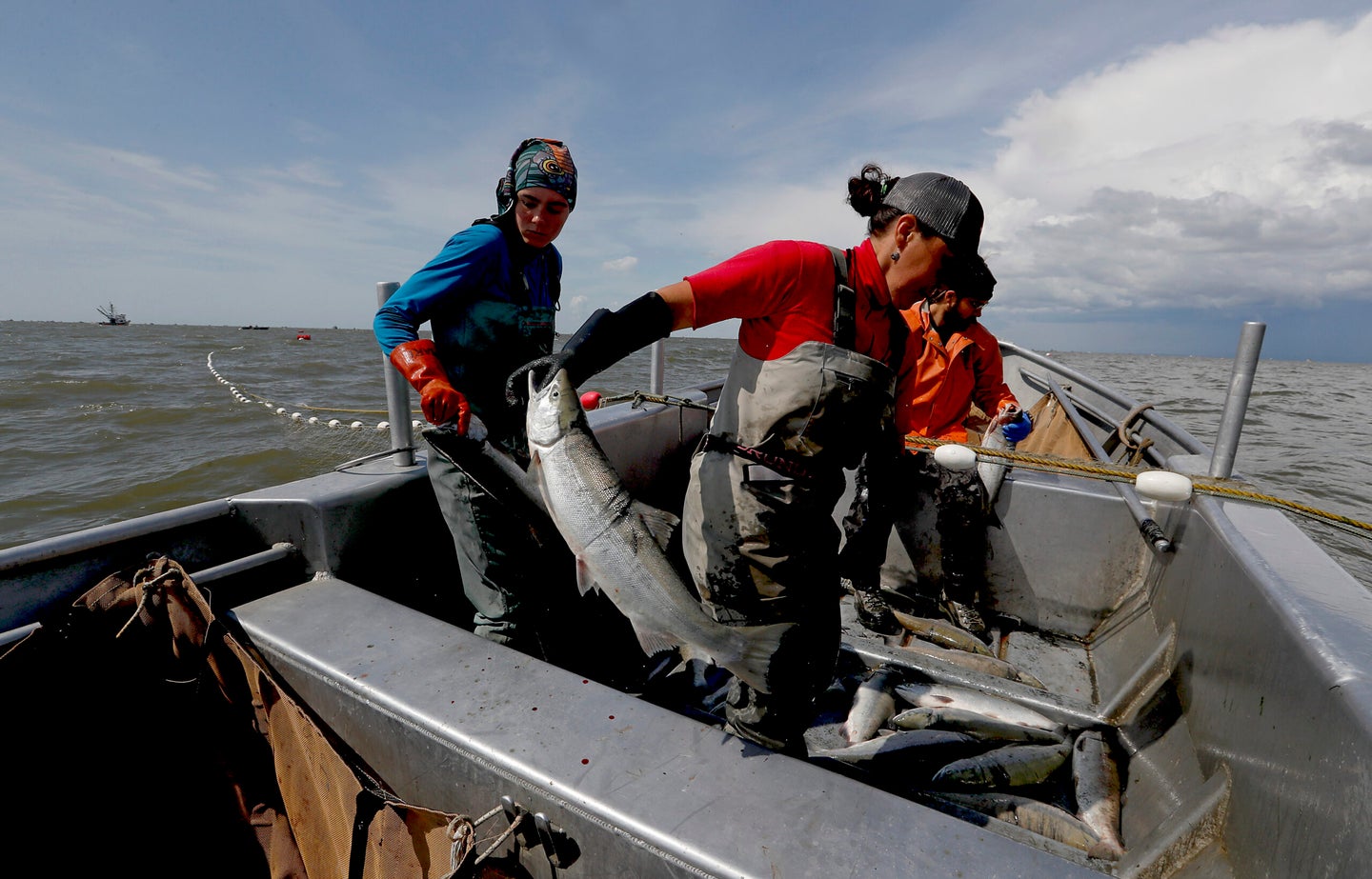 Southwest Alaska is experiencing one of the most abundant salmon runs the state has ever seen in a place called Bristol Bay—the largest and most productive sockeye salmon fishery in the world. While the Bristol Bay salmon run is an annual spectacle, and the fish have been returning in record numbers over the past few years, there’s never been a year quite like this one.  According to the Alaska Department of Game and Fish, which maintains a total fish count during the summer spawning season, the 2022 Bristol Bay salmon run has now eclipsed 72 million individual fish—and records will continue to be broken every day for the remainder of the season.

Bristol Bay is home to some of the world’s best remaining salmon habitats and provides nearly half of the global supply of wild-caught sockeye salmon. It’s also the site of a prolonged environmental saga over the “Pebble Mine” proposal, which seeks to extract sizable deposits of gold, copper, and molybdenum from a large swath of the wild country that lies above the bay’s headwaters.

If it’s ever constructed, Pebble Mine would be one of the biggest open-pit mining operations in the world at roughly two miles long and 1,700 feet deep. Opponents say it would irrevocably alter the environment of Bristol Bay, severely degrading the world’s last best salmon habitat and robbing the region of billions of dollars worth of commercial and recreational fishing-related revenue.

The battle to protect Bristol Bay from the ill effects of Pebble Mine has raged on since 2005—and it finally appears to be reaching the finish line. The United States Environmental Protection Agency is weighing a measure that could provide durable protections for the Bristol Bay watershed well into the foreseeable future. Here’s the history of the fight against Pebble Mine—and why all outdoorsmen should care about the latest development.

The EPA Has Tried to Protect the Bay Before

The EPA first proposed protections for Bristol Bay in 2014 during the Obama Administration. In response to a 2010 petition put forth by various local tribes at the tail end of a multi-year assessment of the negative impacts that Pebble Mine could have on the region, the agency decided that a rarely used provision of the federal Clean Water Act known as section 404(c) should be applied to Bristol Bay.

According to the EPA, section 404(c) of the Clean Water Act would prohibit the discharge of mine-related waste into Bristol Bay waterways that are deemed navigable and worthy of protection under the far-reaching Waters of the U.S. Rule (WOTUS). Without the ability to discharge dredge or fill material into these WOTUS-protected streams and rivers, the current Pebble Mine plan would be dead on arrival. When the EPA invoked the Clean Water Act, opponents of the mine celebrated—perhaps prematurely.

Northern Dynasty Minerals, the Canadian conglomerate that owns the rights to develop Pebble Mine, was quietly gearing up to play the long game. The company requested and was granted an in-house investigation of the EPA’s environmental assessment process that led to the proposed protections for Bristol Bay. When that investigation failed to yield fruit, Northern Dynasty publicly denounced the results, then proceeded to file lawsuit after lawsuit against the agency in hopes of blocking the Clean Water Act protections altogether. Those lawsuits thwarted the EPA’s goals throughout the duration of the Obama administration and into the Trump years.

Then, in 2019, during an infamous closed-door meeting between Northern Dynasty CEO Tom Collier and President Donald Trump’s EPA head Scott Pruitt, a troubling new agreement materialized. The EPA would settle its lawsuits with Northern Dynasty by throwing 404(c) protections out the window altogether. The permitting process for Pebble Mine was imbued with new life, and the mine’s opponents were suddenly back on the defensive.

A Coalition of Conservationists Mobilized

Tia Shoemaker is a life-long Alaskan who grew up on a 40-acre inholding inside the Becharof National Wildlife Refuge, a vast wilderness that lies due east of Bristol Bay. Her family has owned and operated Grizzly Skins of Alaska Inc., a hunting and fishing guide service, since 1983. Shoemaker takes clients into the Becharof’s federally designated wilderness in pursuit of everything that the game-rich Alaska Peninsula has to offer—from brown bears, moose, and caribou to spawning salmon, Dolly Varden, and giant rainbow trout. She says the Pebble Mine proposal has been hanging over her family’s head like a storm cloud for more than twenty years.  “In 2014, we were all thinking, this is going to be it. We’re finally going to see the end of this thing,” Shoemaker tells Field & Stream. “And then for it to just come back with a vengeance was terrifying.”

When Pebble reared its head again in 2019, conservationists quickly mobilized. Trout Unlimited (TU) sued the EPA in the wake of Pruitt’s decision to rescind Clean Water Act protections, claiming that the agency ignored sound science and prioritized the advancement of the Pebble Mine over the interests of Bristol Bay’s multi-billion dollar salmon fishing industry. Shortly after filing suit against the EPA, TU was joined in its opposition by a chorus of media voices, including conservative talk show host Tucker Carlson, who aired his grievances with Pebble Mine during a prime time slot on his popular Fox News television show. Carlson, an avid fly fisherman, also granted ad space to the Theodore Roosevelt Conservation Partnership, which used the valuable air time to denounce Pebble Mine. In subsequent episodes of his show, he interviewed a range of Pebble Mine opponents from Bass Pro Shops’ Johnny Morris to local Bristol Bay business owner Brian Kraft. Some would later speculate that Carlson’s anti-Pebble broadcasts fell on the ears of one of his biggest fans: President Donald Trump.

About a month before Carlson’s first Pebble Mine segment aired, the president’s son, Donald Trump Jr., added his voice to the fray. “As a sportsman who has spent plenty of time in the area, I agree 100 percent [that President Trump should block Pebble Mine],” he wrote on Twitter. “The headwaters of Bristol Bay and the surrounding fishery are too unique and fragile to take any chances with.”

In September 2020, Northern Dynasty CEO Tom Collier was surreptitiously recorded by anti-Pebble activists who were secretly posing as potential mine investors. In subsequently released audio, Collier and a colleague can be heard boasting about their company’s political clout and admitting that their proposed mining operation would extend far beyond the publicly stated timeframe of just 20 years.

“That took the wind out of their sails,” Shoemaker says. “It proved that all the outrageous things they’ve mentioned over the years—from wanting to blast out a portion of Lake Iliamna to accommodate barge traffic into their mine to replacing the fishery that they could ultimately destroy with farm-raised salmon—you can be sure that they’re still thinking about all of these things whether they’re on the permit or not.”

In the wake of the groundbreaking tapes, support for Pebble eroded even further. Collier resigned as CEO of Northern Dynasty, Trump’s Army Corps of Engineers denied the mine its long-sought permit in November 2020, and Pebble’s opponents celebrated another win in Sept. 2021 when TU won its lawsuit against the EPA.

Fast forward to the summer of 2022. With sockeye salmon rushing back into Bristol Bay’s streams and rivers, the EPA under the Biden Administration just extended a public comment period for a proposal that could resurrect 404(c) Clean Water Act protections for Bristol Bay and veto the Pebble Mine.

According to Tia Shoemaker, now is the time to act if you want to see Bristol Bay’s wild salmon runs persist on the Alaskan landscape in perpetuity. “The Bristol Bay salmon run is like nothing else I’ve ever experienced,” she says. “The feeling of being on the ground when they’re super chromed-out and flooding into those tiny streams, and the bears are fishing right next to you, and they’re just as happy as you are and everybody is ignoring everybody, just trying to catch their fill…It’s magic. Everything relies on the salmon run, but once it’s gone, it’ll be gone forever.”

You can submit a comment on the Clean Water Act protections for vulnerable portions of the Bristol Bay Watershed here. The deadline to add your voice to the EPA’s public comment record is September 6, 2022.