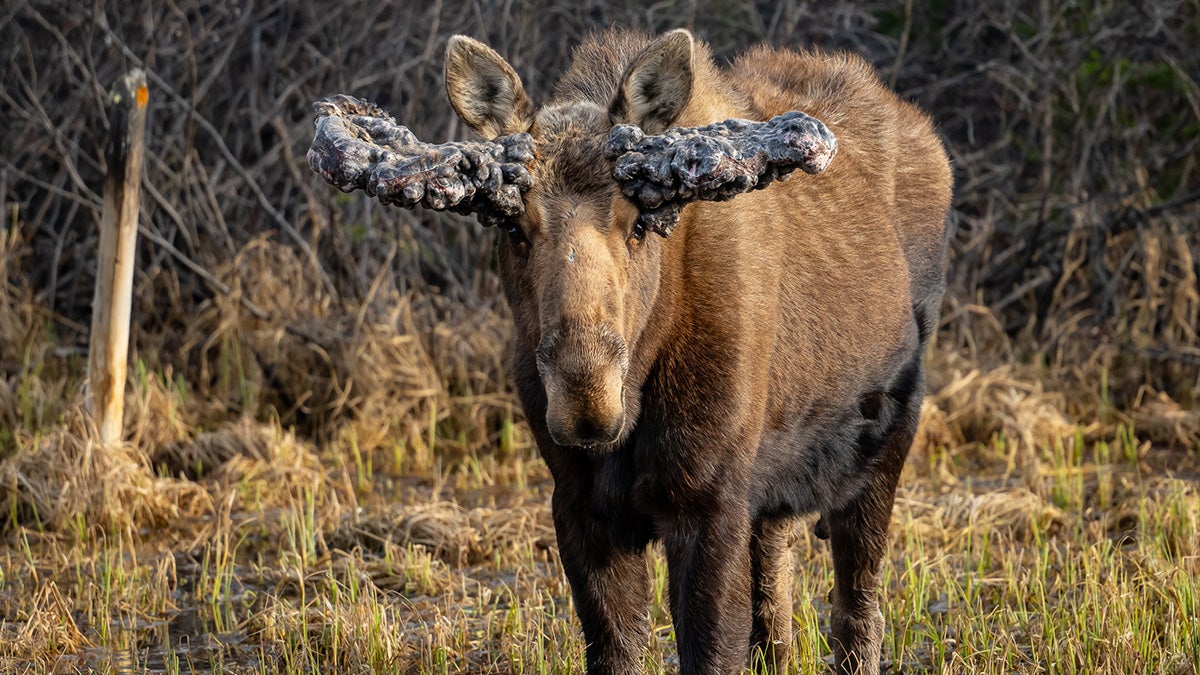 Earlier this spring, Canadian photographer Jim Petelski came across a stunning sight—a bull moose with misshapen paddles. Petelski was shooting photos of wildlife near Marsh Lake, which is just south of Whitehorse, Yukon, when he came across the strange-looking creature.

“When I first saw it, I thought why does a bull moose have antlers this early in the year?” Petelski tells F&S. “As I got closer, I thought maybe the paddles were just covered in mud and moss from the swamp. Then I saw the rest of his head was clean, and I was dumbfounded. I could not believe what I was seeing.”

Petelski, who recently shared an incredible series of photos with F&S of a black bear falling asleep and then plunging headfirst into an icy pond, snapped as many photos of the bull as he could while maintaining a safe distance. He surmised that perhaps the bull had a serious infection, causing the strange paddle growth. After returning home, he emailed his images to a friend at the Yukon Department of Environment.

Six veterinarians from the department’s Animal Infectious Disease Unit examined the photos and came to a consensus. They believe that the bull is what’s known as a “peruke bull,” meaning its paddle growth has been impacted by accidental castration or testicles that did not form properly. The loss of normal reproductive organs likely impacted the animal’s hormone levels and in turn, its antler growth. Peruke bulls, like cactus bucks, cannot reproduce but otherwise tend to be healthy. The bull that Petelski photographed also had a growth on one of its back legs, likely caused by a blocked duct gland, which is unrelated to its misshapen antlers.

“I’ve harvested a lot of moose but never seen anything like this one before,” says Petelski. “And I’ll likely never see anything like it ever again.”