Vermont Confirms EHD in Whitetail Population for First Time Ever

Deer managers across the northeast are on the hunt for EHD, which can do serious harm to deer herds 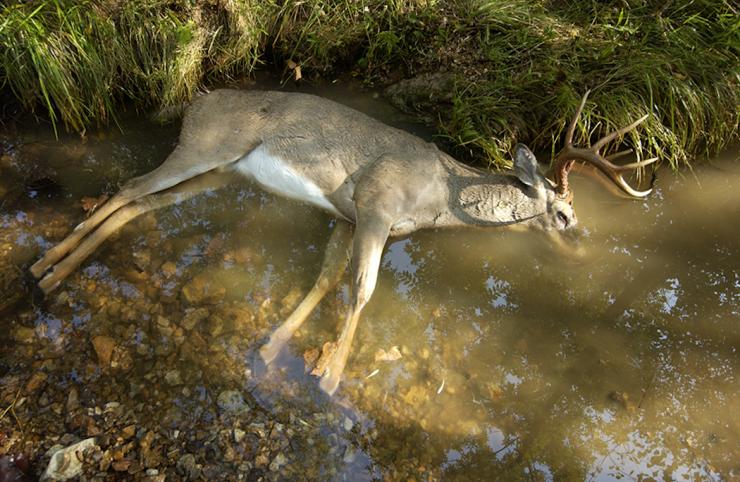 The presence of Epizootic Hemorrhagic Disease (EHD) has been confirmed in Vermont for the first time in state history. Several deer in Rutland County were recently discovered dead from the viral disease. The county is in the north-central part of the state and to the east of the Adirondack Park in New York, which has been hit hard this autumn by a massive outbreak of EHD. Officials in Massachusetts and other northeast states are monitoring for any cases of the disease while hoping for a hard frost to kill the biting midges that spread it.

The Vermont Fish and Wildlife Department (VFWD) said the EHD cases so far have been confined to the towns of Castleton and West Haven in a press release. The agency notes that “although [the cases] are likely related to more widespread outbreaks occurring in New York. The majority of Rutland County and the rest of Vermont appear not to have been affected by EHD.” The disease was confirmed in seven counties in New York in September 2021, and NY Department of Environmental Conservation officials have been investigating cases in a total of 28 counties statewide. The Hudson Valley was hit hard, as was Long Island. By early October, about 1,600 cases had been reported in New York, according to the Cornell University Wildlife Health Lab. EHD was first confirmed in New York in 2007. In 2020 an estimated 1,500 deer died in the lower Hudson Valley from the virus.

EHD is spread by tiny, biting midges also known as “no-see-ums.” Multiple strains, or serotypes, of the virus do exist. Whitetails infected with one strain may survive and become more resistant to that strain but not to a different one. Once infected, deer often die within 36-48 hours. The disease causes swelling of the head, neck, tongue, and lips, as well as fever, hemorrhaging, and excessive thirst. Sick and dead deer often are found near water sources. Drought often spurs increased contraction of EHD due to a higher number of animals—and biting midges—being concentrated at fewer water sources.

Outbreaks are most common in late summer and early autumn. A hard frost can kill the midges that transmit the virus. Whitetails in the southeast U.S. are more resistant to EHD due to greater exposure to it. In some years, outbreaks are more severe in the region but do not greatly impact the population over the long term. Deer in other parts of the country, such as Vermont, are less resistant to EHD, and it can lead to far greater numbers of deaths. Whitetails in Idaho and Washington have been hammered by EHD this year. North Dakota officials saw an uptick of EHD cases this year near an area that was affected in 2020.

VFWD officials are asking hunters to report sightings of sick or dead deer to the State Police dispatcher, who would then contact VFWD game wardens. Department officials want to take samples for testing and to monitor the outbreak’s spread. Hunters who kill a deer during Vermont’s “youth and novice weekend,” which is Oct. 23 and 24, are asked to take their deer to a reporting station for data collection. A map showing the reporting stations is available on the VFWD website.

“Examining deer during this weekend is our best opportunity to assess the deer herd because hunters are allowed to harvest any deer, including spike bucks,” says Nick Fortin, the VFWD’s deer project leader. “Biologists will be able to collect data on age, weight, and antler development to help guide future deer management decisions.”