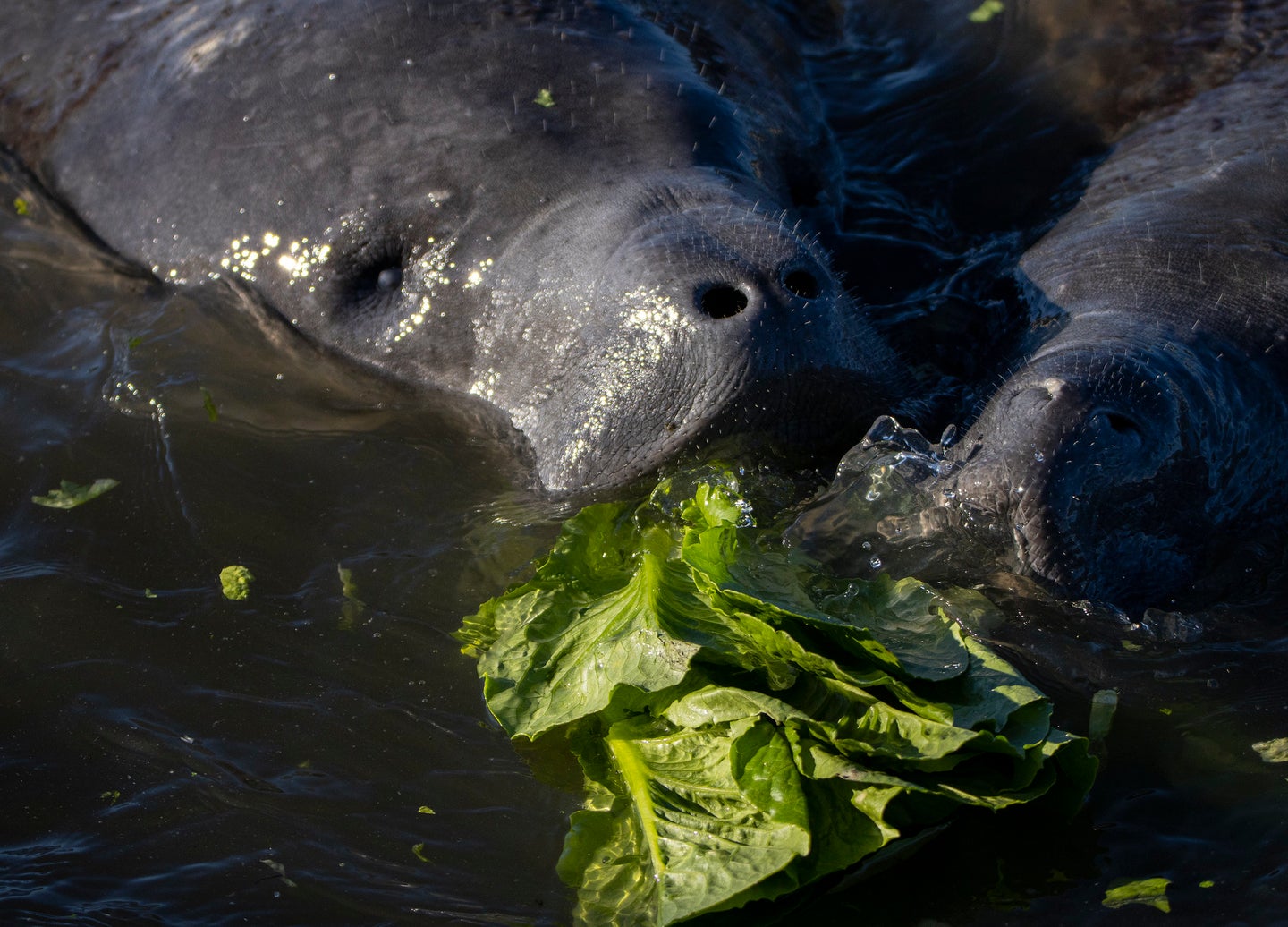 Experts say that leafy greens are an efficient way to get much-needed nutrients to manatees. FWC
SHARE

An experimental project by the Florida Fish and Wildlife Commission (FWC) and the U.S. Fish and Wildlife Service has fed more than 55 tons of lettuce to starving manatees so far this winter, officials said in a conference call last week, according to the Associated Press.

A record 1,101 manatees in Florida died in 2021, which is thought to be about 10 percent of the threatened species’ overall population in the state. The first two months of 2022 saw another 375 recorded manatee deaths. Most of the fatalities are attributed to water pollution that has depleted coastal seagrass—the animals’ preferred food source—in the Indian River Lagoon, where manatees congregate in winter.

“Wondering why lettuce instead of vegetation that manatees naturally graze on?” writes the FWC in a recent Facebook post. “We consulted with manatee experts and veterinarians and determined leafy greens were the best option for providing nutrients during this limited, short-term trial.”

The state and federal wildlife agencies announced in November they were forming a Joint Incident Management Team to coordinate their emergency response after U.S. Fish and Wildlife officially declared the manatee die-offs along Florida’s Atlantic Coast an “Unusual Mortality Event.” The unprecedented feeding program is a key part of that response. At a feeding site located at Florida Power & Light, officials have fed as much as 3,000 pounds of donated romaine lettuce each day to as many as 800 manatees at a time.

During the recent conference call, officials said the supplemental feeding effort is making an impact—and that more may be required in the coming weeks.  The effort to help starving manatees make it through the winter has drawn strong support from private donors, who’ve made more than 1,000 individual gifts. Among the groups raising money for the initiative is the Fish and Wildlife Foundation of Florida, which also helps with the rescue and rehabilitation of stressed manatees. The agency is currently caring for more than 80 animals at its facilities.

Florida’s manatee population has grown to at least 7,520, according to Florida Fish and Wildlife Commission. Manatees were once listed as an endangered species. They were reclassified from “endangered” to “threatened” under the federal Endangered Species Act in May 2017, but recent die-offs have led to calls for a return of the endangered status.

Read Next: Bobcat Raids Invasive Python Nest in the Everglades

Although Florida legislators have provided $8 million for seagrass restoration projects last year, those habitat improvements are considered long-term solutions. Feeding is seen as a stopgap measure to help starving manatees survive the cold months when they congregate around warm-water sources such as power plants. Once the weather warms, officials say the animals will disperse into areas where food is more plentiful.