Millions of Giant Invasive Spiders are Taking Over Northern Georgia

Joro spider numbers are exploding in Georgia, creating scenes straight out of "Arachnophobia," according to local experts 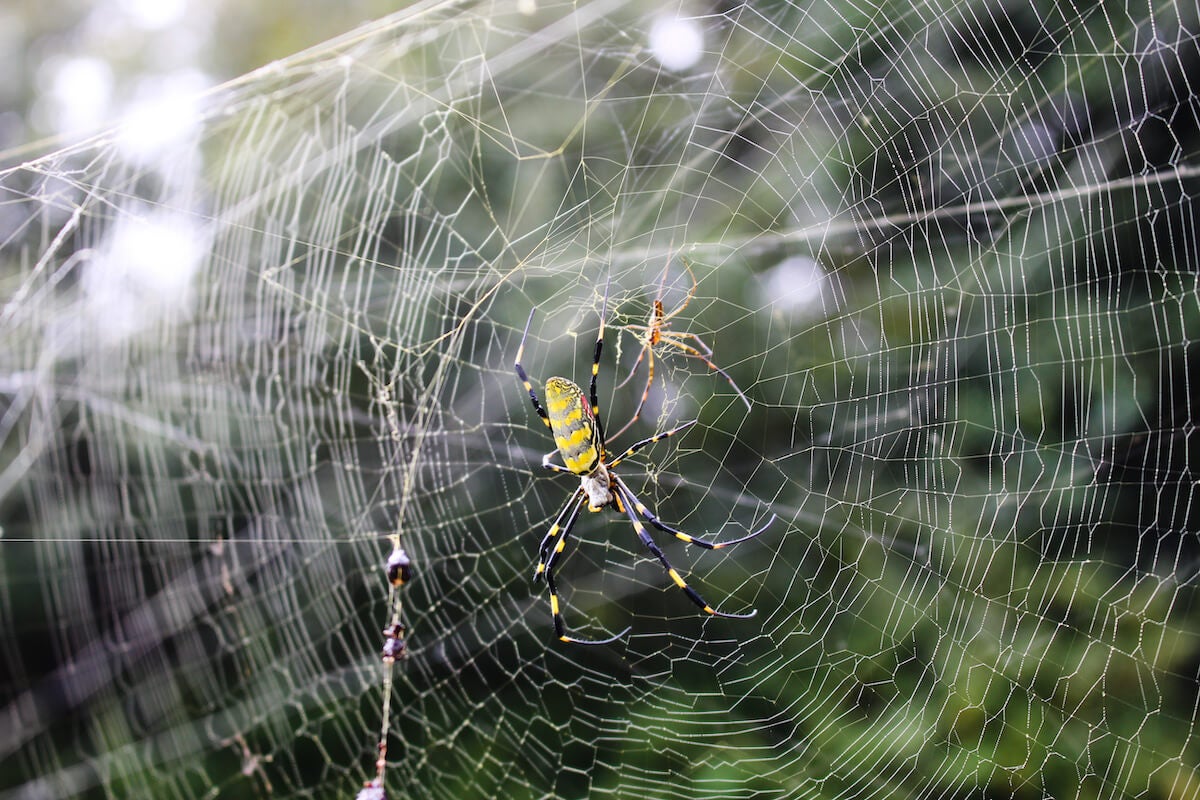 Joro spiders have established themselves in 25 of Georgia's counties—and counting. University of Georgia
SHARE

Halloween has come and gone, but the yards and porches of many northern Georgia homes are still adorned in massive, sticky spiderwebs. They’re the work of a new spider in town: the Joro spider. Joro spiders are big—about 3 inches across with their legs fully extended—and they’re colorful. Females have yellow, blue, and red markings on their bodies. Common in Japan, China, Korea, and Taiwan, the first Joro spider was identified in Georgia in 2014. It likely hitch-hiked on a ride in a shipping container. The Joro spider is a member of a group of spiders known as orb weavers, which create highly organized, wheel-shaped webs.

“The webs are a real mess,” Will Hudson, an entomologist at the University of Georgia, told the Associated Press. “Nobody wants to come out of the door in the morning, walk down the steps and get a face full of spider web.”

Hudson was initially excited to find the Joro spider in his Winterville, Georgia, yard three years ago. But since then, the spiders have proliferated quickly, becoming more of an annoyance than a novelty. “Last year, there were dozens of spiders, and they began to be something of a nuisance when I was doing yard work,” he said in a press release. “This year, I have several hundred, and they actually make the place look spooky with all the messy webs — like a scene out of Arachnophobia.”

It’s not clear why Joros are so abundant this year, though experts agree their numbers have exploded. Paula Cushing, an arachnologist at the Denver Museum of Nature and Science told the Associated Press that the population boom is probably “linked to local conditions, particularly the slight changes in rainfall.” Cushing adds that Joros pose no threat to people or pets and rarely bite.

As for what threat Joros might present to local ecosystems, scientists aren’t yet sure. Nancy Hinkle, another University of Georgia entomologist, says the Joro is a “beautiful creature that provides free pest control.” She explains that the Joro spider is one of the few species of spiders that prey on brown marmorated stink bugs, another invasive species that wreak havoc on agricultural systems. Joros also eat mosquitos and biting flies.

Ann Rypstra, who studies spider behavior at Miami University, is warier of the Joro’s potential ecological impact, telling the Associated Press she prefers to “err on the side of caution when you have something that establishes itself where it’s not supposed to be.” Either way, Joros are almost certainly here to stay. Though this year’s batch of Joros will die by late November, they will leave behind sacs of hundreds of eggs. When the hatchlings emerge in the spring, they will likely find their way into new habitats—and new porches—to spin their webs.