The giant sunfish specimen beat out the previous world record by approximately 1,000 pounds 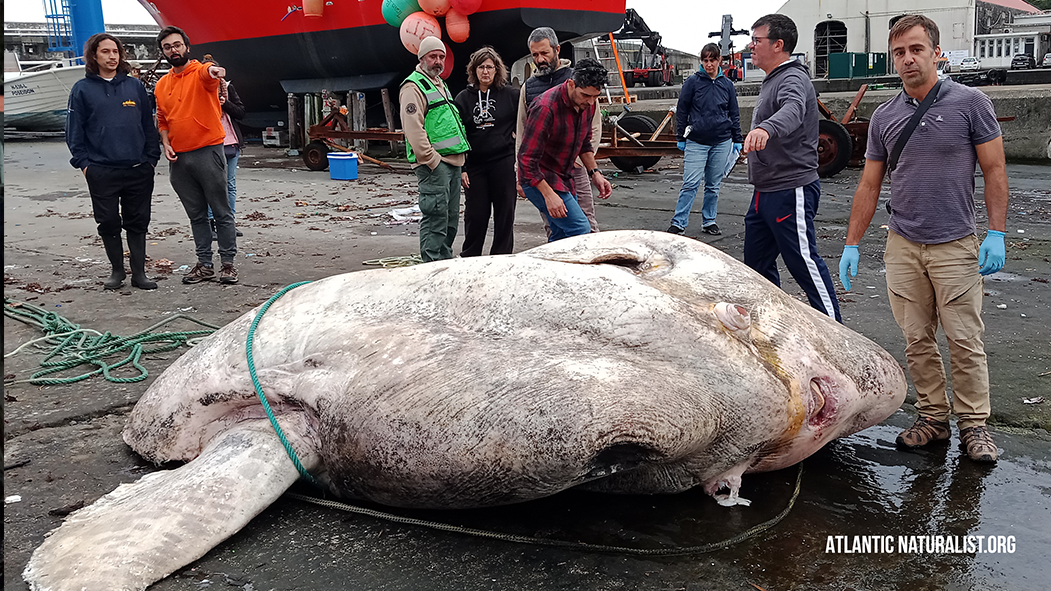 The massive specimen was lifted with a forklift truck. Atlantic Naturalist Association
SHARE

The largest bony fish on record was recently found by a team of researchers near Portugal. According to a study published on October 11, 2022, in the Journal of Fish Biology, the new world record for the heaviest bony is a giant sunfish or Mola alexandrini specimen that researchers encountered floating lifelessly off the coast of Faial Island in December 2021. They were able to drag the carcass to shore, where they used a crane scale to weigh it. The giant specimen came in at a stunning 2,744 kilograms—or 6,049 pounds. The fish was also 10.6 feet long, 11.8 feet tall, and 2.8 feet wide.

According to the study, the sunfish is the “heaviest extant teleost specimen reported to date,” meaning its the heaviest bony fish ever documented. It easily surpasses the 5,070-pound sunfish found near Japan in 1996 that Guinness World Records currently recognizes as the largest bony fish ever. The distinction between bony and non-bony fish is important to note. Whale sharks—which have cartilage, not bones—can reach weights in excess of 41,000 pounds.

After weighing the giant sunfish, researchers analyzed its stomach contents, which showed an empty digestive tract, and took a tissue sample to extract its DNA information. They also tried to investigate its cause of death. The fish had a “large contusion in the form of a semi-cylindrical depression” on the right side of its head, adding that a large impact likely caused the contusion. “The skin in the depression showed remains of brick red antifouling paint, such as normally used in the keel of boats,” wrote the study’s authors. “It is however not clear if the impact occurred pre or post-mortem, and therefore the cause of death remains uncertain.”

Regardless, the giant sunfish is an impressive specimen—and offers a look at one of the ocean’s most unique and rare creatures. “Such large specimens are difficult to study,” write the study’s authors. “Continued research is required to understand the physiology and ecology of these iconic and elusive species.”