Watch: Grizzly Bear Sprints After a Herd of Wild Horses in Canada

A pro-horse advocacy group claims the incredible footage is proof that feral horses do have natural predators. Judge for yourself 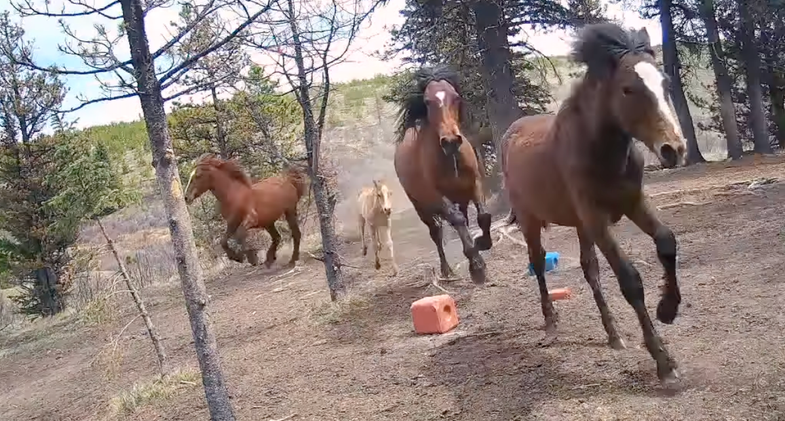 A big grizzly bear recently gave chase to a group of wild horses in Alberta, Canada. According to ViralHog, the unexpected event took place about a two-hour drive northwest of Calgary on May 26, 2022. The Help Alberta Wildies Society, a wild-horse advocacy group, recorded incredible footage of the chase using trail cams.

“These trail cameras are part of a large network of cameras collecting video data on the plight and mortality of Alberta’s Wild Horses from both natural causes and large predators,” the group told ViralHog. “Alberta Wildies Society has been conducting this research since 2014 and uses the data to promote worldwide awareness about our threatened population of Wild Horses here in Alberta, Canada.”

The group claims that the video is proof that Canada’s wild horses do in fact have natural predators, although the big grizzly doesn’t seem particularly close to catching any of the horses in the footage. “The next time someone tells you that the Wild Horses have no natural predators, send them to me,” wrote a representative of the organization in a Facebook post. “We are losing a lot of horses this year, sooner and quicker than in past years. Not just the foals but adults also.”

Grizzly bears are found in the Rocky Mountains and some boreal forests of Alberta. According to the Alberta Wilderness Association, there are an estimated 856 to 973 bears in the province as of 2021. Grizzly bears can reach weights of up to 800 pounds and are considered to be “opportunistic feeders,” meaning they often try to make a meal out of whatever food sources they come across. The species is native to the region.

Meanwhile, feral horses in Alberta are considered the descendants of domestic horses from logging, guiding, and outfitting operations in the early 1900s, according to the Government of Alberta. As of 2021, the agency says there are at least 1,314 feral horses in the province. The province, like wildlife management agencies in the western U.S., conducts a capture and removal program of feral horses to minimize their harmful impacts on rangelands.