Before freeing the bucks, Troy Rebarchek considered shooting them but decided against it 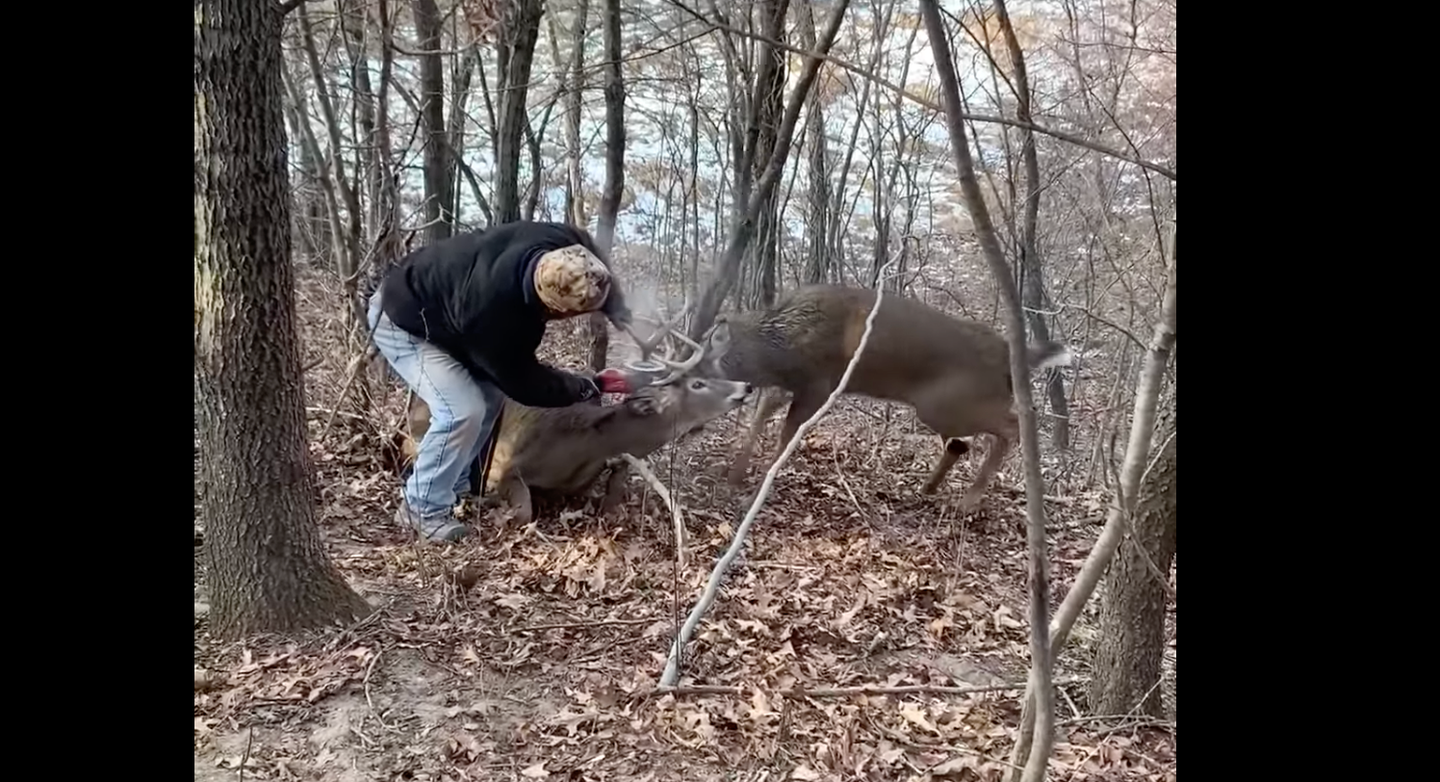 On December 20, 2021, 90-year-old Everett Sluga was going for a drive when he spotted something unusual: two whitetail bucks with their antlers locked together. The bucks were on private property in Wisconsin’s Trempealeau County, which is a hotspot for big bucks. Sluga alerted the landowners: Troy Rebarchek and his wife Tami Keenan who went to investigate. Rebarchek is a bowhunter, and at the time, says he still had buck tags in hand.

Rebarcheck and Keenan initially found the deer in a creek bed but the bucks slowly moved to a CRP field. “They were like a tornado in [the CRP field],” Rebarcheck wrote in a Facebook post. “Both were 3-1/2- to 4-1/2-year-old 8-pointers. [It] would’ve been a beautiful 16-point mount hanging on our wall.”

Rebarcheck brought his bow with him when he checked on the deer—and even aimed at one of them. But ultimately, he decided against shooting the locked-up bucks and tried to free them instead. “I just didn’t feel it was right shooting them in the situation they were in,” Rebarcheck told WEAU13. “It just didn’t feel ethical to me.” The couple decided to try to move the deer out of the CRP field to a place where they couldn’t move around so much. “We kind of made a little drive and got them in woods, which is where they got locked down,” said Rebarcheck.

Rebarcheck used a Milwaukee Grinder he had in his truck to free the bucks. Keenan caught the life-saving procedure on camera—and truthfully, it looks really dangerous. The two bucks panic when Rebarcheck touches the grinder to their antlers, and the frantic animals are about a foot away from his body while the grinder is spinning at full speed. But, after sawing a good hunk of antlers off of each of them, Rebarcheck somehow pulls it off and separates the bucks.

Wisconsin DNR Hunter Education Administrator and Conservation Warden Jon King praised Rebarcheck’s actions, telling WEU13 that “this guy allowed [the bucks] to enjoy a little bit of life…I’m happy that he did.”

Read Next: Muley and Whitetail Bucks Lock Antlers in Battle to the Death

Bucks locking antlers while fighting is a rare phenomenon that can prove fatal to one or both creatures unless a good samaritan intervenes. Rebarcheck says it’s the second time he’s encountered locked-up bucks on his farm—and that when it happened for the first time back in 1999, the “end result didn’t turn out too well for either buck.” This time, both bucks seemed to run away uninjured after Rebarchek successfully separated their antlers. Rebarcheck has no qualms about letting the bucks walk, and hopes to continue the story next fall during hunting season by taking one of them in a fair chase situation.