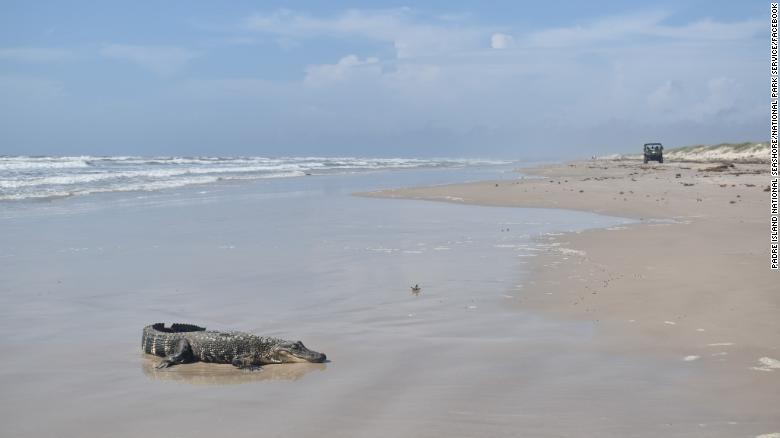 This gator was ashore on a South Padre Island beach in Texas.
SHARE

A routine search on a South Texas beach turned up an unusual find: an American alligator. The gator is thought to be from Louisiana, and it washed ashore on Malaquite Beach in the Padre Island National Seashore. It was discovered by members of the National Park Service’s turtle squad who were looking for sea turtles.

Located in Corpus Christi, the Padre Island National Seashore is the longest undeveloped barrier island in the world. It separates the Gulf of Mexico from Laguna Madre and is a popular place for outdoor recreation. One theory of how the gator arrived from Louisiana to the Texas beach is weather-related. Storms over the past two months dropped over 12-inches of rain on Louisiana, including the third-highest amount of rain the state has ever seen in a single day. Flooding may have washed the gator to sea, where it became disoriented. Kelly Taylor, the Padre Island National Seashore public information officer told CNN, “[The alligator] had a significant amount of algae on its back that leads us to speculate that it was floating in the Gulf for a while.”

Alligators typically lie in the sun which helps dry out algae. The National Oceanic and Atmospheric Administration says, “While alligators can tolerate saltwater for a few hours or even days, they are primarily freshwater animals, living in swampy areas, rivers, streams, lakes, and ponds.” The gator is being treated for dehydration, and when it is recovered it will be relocated and released.