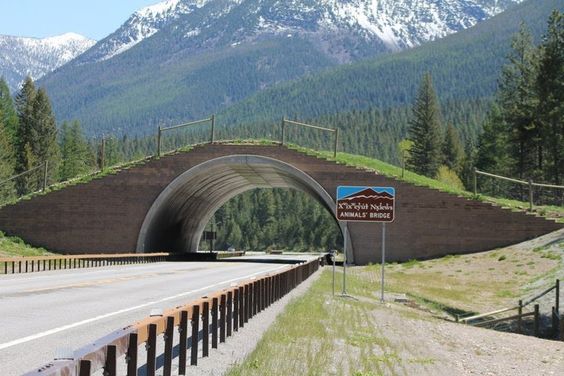 Interstate 90, which runs from Boston to Seattle, cuts right through the heart of Missoula County, Montana. Around it on all sides are northern Rocky Mountains and state and national forests: Flathead, Lolo, Helena-Lewis and Clark, Nez Perce Clearwater, and Selway Bitterroot. Elk, grizzlies, cougars, deer, and other critters roam the ecologically rich region. The humans, though, make the decisions. And a recent one by county officials to parcel land for human use has stirred debate about the fragmentation of wildlife corridors.

Last week, Missoula County approved a plan to divide 17 acres near the Huson interchange, just south of Interstate 90, into five parcels. The subdivision, known as Huson Acres, will be managed by Montana Northwest Co. While the plan only permits one plot for every five acres, Missoula County Commissioner Dave Strohmaier voiced an ongoing concern to the Missoula Current: “Highway 93 north and south, and along I-90 east and west, how do you provide wildlife connectivity in these ever more fragmented landscapes?”

Globally, habitat fragmentation is a primary cause of the decline of many species, as it leads to smaller and more isolated animal populations, which in turn results in local extinctions. Maintaining landscape “connectivity”⁠—preserving habitat for movement of species between remaining fragments⁠—is viewed as a key solution, one that Montanan ecologists have advocated. Missoula County commissioners also lobbied their federal senators to ensure that the Infrastructure Investment and Jobs act included funding to maintain open wildlife corridors.

As for the new subdivision, Montana Northwest Co.’s Lynn Edens suggests they are striking the right balance. “We’ve done a lot of effort on mitigation and trying to keep a boundary from the freeway and keeping small agriculture so it’s not a completely developed lot on every side,” she told the Current. “But surrounding it, there is a lot of development, so it does fit right in.”

To which Commissioner Strohmaier addresses the original divide, “Whether this is developed or not doesn’t do anything about the fact that you still have wildlife trying to cross four lanes of interstate.”