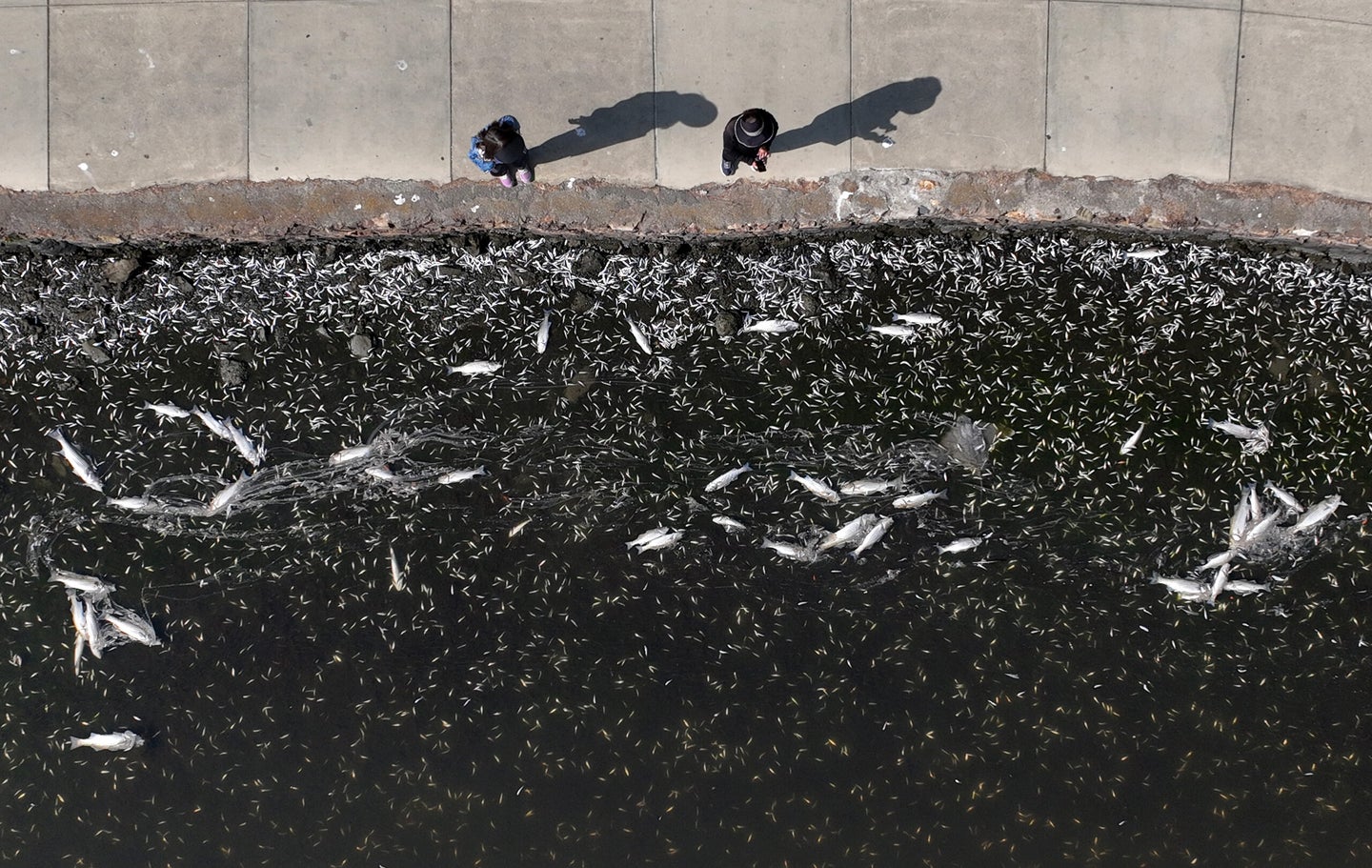 Striped bass are one of a number of game fish species impacted by the red tide. Justin Sullivan/Getty Images
SHARE

A massive toxic algae bloom is killing tens of thousands of fish in the San Fransisco Bay. According to the SF Baykeeper, the dominant algal species causing the bloom is Heterosigma akashiwo—which is known to form red tides. Heterosigma akashiwo is not toxic to humans but does impact fish and other wildlife. It is always present in the San Fransisco Bay but hasn’t bloomed like this since 2004. Some scientists say that humans are to blame for the mass fish kill.

“Treated sewage discharges from the Bay’s 40 sewage treatment plants and the pollutants from five dirty oil refineries create conditions ideal for algal blooms,” explains SF Baykeeper in a press release. “Baykeeper scientists have been actively working for the past five years through agency technical advisory committees to prevent large blooms of any number of potentially toxic microorganisms from becoming commonplace in the Bay. The Regional Water Board needs to get excessive sewage and refinery discharges under control, and Bay Area cities need to invest in water recycling to keep wastewater out of the Bay in the first place…Hopefully this is a wake-up call.”

Other than pollutants, warm water temperatures may be playing a role in spurring that algal bloom. SF Baykeeper officials say that the total fish kill could exceed the hundreds of thousands. Dead fish are washing up along the shores of the San Francisco Bay, San Pablo Bay, and South Bay. The red tide appears to be killing fish species indiscriminately, including sturgeon, halibut, bat rays, striped bass, yellowfin gobies, sharks, and more.

“From a fish’s point of view, this is a wildfire in the water,” Jon Rosenfield, senior scientist with SF Baykeeper, told KQED. “What you see is just the hint of what’s actually happening further beneath the water’s surface and in places, you’re not getting to on the shoreline. So [the total fish kill is] really an uncountable number.”

Read Next: Officials Investigate Fish Kill of Over 600 Trout in Wisconsin Stream

Scientists have been tracking the red tide since late July. They expect it to dissipate as the algae burns through the Bay’s nutrient supply and days become shorter, limiting the amount of sunlight on the water. But as of right now, it remains ongoing—and more fish are washing up dead each day. It remains to be seen what kind of impact the fish kill will have on the San Fransico Bay’s recreational and commercial fisheries.

“We’ve never seen anything of this magnitude,” Eileen White, executive officer of the San Francisco Bay Regional Water Quality Control Board, told the Mercury News. White also told the New York Times that her department will do everything it can to prevent future fish kills. “We’re on it,” she said. “We’re taking action.”