Officials say that the bear had become habituated to humans because it had easy access to garbage, birdseed, and pet food 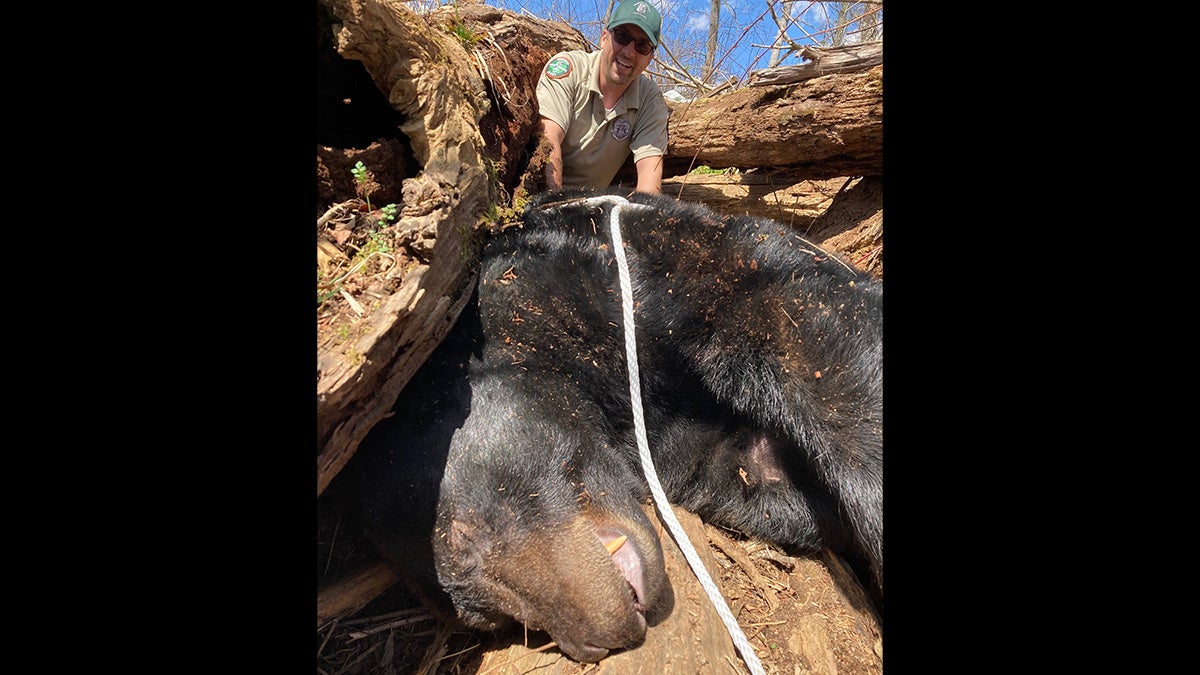 Officials in Tennessee have removed a whopper of a black bear. According to a recent Facebook post, the Tennessee Wildlife Resources Agency (TWRA) tranquilized and relocated the problem bear in Greeneville, Tennessee near Tusculum College on Wednesday, March 23. The agency had been trying to remove the 500-pound bruin since last year.

“The bear had regular access to garbage, birdseed, and pet food had and been in the area for a few years but ramped up its activity and property damage last year,” explains the agency. “Wildlife Officers decided to trap it then due to the increased potential for negative interaction but were unsuccessful after the bear changed its travel routine. Recent activity indicated it was back to its old ways.”

Wildlife officers Ryan Rosier and Austin Wilson, along with Wildlife sergeant David Carpenter, encountered the bear on a small vacant lot. The officers “free-range” tranquilized the bear without trapping it. Because of the bear’s big size, the agency requested the help of the Greeneville Fire Department to transport the bear. The bear was safely released in a remote area of the Cherokee National Forest, which is in the eastern part of the state.

Tennessee once had large black bear numbers, but the bear population dropped with European settlement of the area, according to the (TWRA). However, recent conservation efforts have led to a “dramatic comeback” of black bears in Tennessee and other parts of the southeast U.S.

“As bears expand into areas with suitable habitat, it is important for communities to learn how to coexist with them,” writes the TWRA on its website. “The deliberate and accidental feeding of bears is socially irresponsible and causes animals to become conditioned and habituated to people. Bears that habituate to human presence eventually become a threat to human safety.”

The agency says that it often has to euthanize habituated black bears—and that securing food sources is the best way to prevent this from happening. In this case, the agency chose to relocate the bear, but some wildlife agencies have found relocating habituated black bears to be ineffective. According to the Florida Fish and Wildlife Conservation Commission, 70 percent of relocated black bears leave the area where they were released, and 50 percent of them exhibit conflict behavior again.