Are Turkeys to Blame For Maine’s Tick Problems? Not Really. 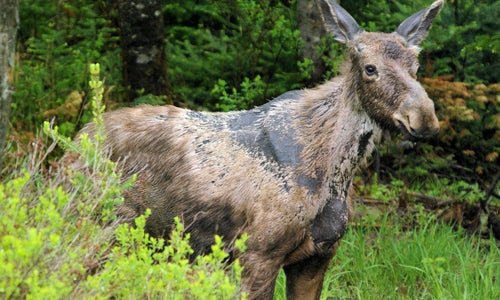 Wild turkeys do not spread deadly ticks according to a new Maine study.
SHARE

The common belief that eastern wild turkeys are causing the spread of ticks and Lyme Disease in Maine is being re-examined. A recent post from the Maine Department of Inland Fisheries and Wildlife (MDIFW) cites research that clears turkeys of full blame.

Ticks, and the spread of Lyme Disease, have been a growing concern throughout the northeast since the 1970s. In Maine, researchers and land managers are directing that concern towards the state’s moose population. Evidence shows that because of warmer winters, moose are getting infested with thousands of ticks, and as a result, calves are dying. According to the Appalachian Mountain Club, “70 percent of moose calves in west-central Maine and northern New Hampshire died of emaciation by winter tick infestation. On average, each animal hosted 47,371 ticks.”

A dramatic increase in the wild turkey population has long been cited as the root cause for ticks spreading throughout Maine. But while turkeys carry ticks, it’s not to the level previously believed. A recent study shows that turkeys actually get rid of just as many ticks as they carry. The reason? Turkeys eat ticks. To figure this out, researchers released ticks into areas with a known turkey population found that the ticks were discovered and eaten during a turkey’s regular self-cleaning routine, thereby creating a net-zero impact on the environment.

According to MDIFW, high turkey and deer populations (along with just about every other mammal) in southern Maine are likely to carry higher numbers of ticks. But in northern Maine, wild turkey populations are low, leading scientists to believe atypically warm winters are to blame for winter tick infestations in moose.