There’s no telling what a deer will do after it’s hit, so choose your bullet wisely 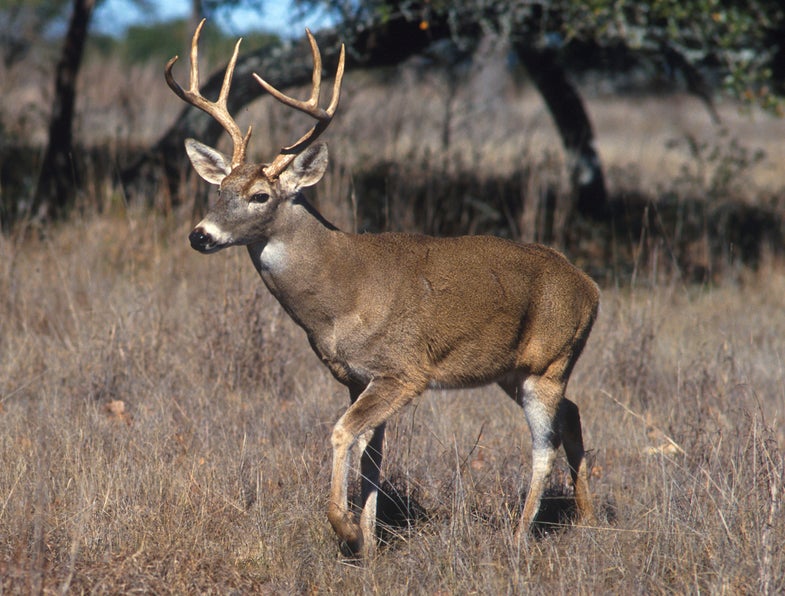 Not so tough. By Scott Bauer/USDA via Wikipedia
SHARE

In my post on the wonderfulness of long, heavy, tough bullets, I did not mention the part they play in deer hunting. This was due to space limitations or perhaps atrophy of the limbic system of my brain. Nothing would surprise me. Anyway, I was discussing big, heavy, tough bullets in conjunction with big, heavy, tough animals, demise of, and left deer out because they are not big or heavy or tough and drop dead when fatally shot by even the most mediocre of bullets.

If you shoot a deer in the ham or the guts, or are one of those morons who take head shots and remove a jaw, the animal will go and go and go. Hit them in the lungs or the heart and they are going to fold up. There is of course, a qualifier. If you use a non-expanding bullet for any of this, the animal will eventually die, but it will put a lot of distance between it and you before it does.

Norm Strung once shot a mule deer buck through the lungs at 40 yards with a 250-grain Winchester Silvertip from a .358. The deer had its head down browsing when the bullet struck. On impact, it lifted its head and looked at us, then went back to eating. Eventually it began to wobble and then collapsed, which pretty well describes our condition.

So, you want a bullet that expands. It does not have to bulldoze its way through a thick hide, heavy bones, and massive muscles. That’s elk, moose, bear, and pigs. Deer, even the 300-pounders, are pretty fragile.

And, deer do not have the elk mentality, which requires them, even when hit fatally, to run a marathon. Some species sometimes simply will not go down even when you do your part. Deer are not among them.

Deer—both species—bolt as a matter of reflex. Seldom do they go more than 100 yards. They don’t run uphill as a rule. I’ve never been able to decide whether a deer with only seconds to live is actively planning its escape or whether its legs are simply carrying out the diminishing instructions from its brain. I’ve seen dying bucks fling themselves into brush tangles so impenetrable that they couldn’t be found by expert trackers and had to be sniffed out by a dog. But I once shot a doe fatally and watched in amazement as she ran headfirst into a tree and killed herself. I doubt if she planned that. Mostly, I think they run in a blind panic.

The lung shot is the money shot for deer, as it is for most species. It’s the biggest target, and a hit anywhere is fatal. But the animals’ reaction to it vary. Some drop as if a safe fell on them and rise no more. Some show no sign of being hit at all, but dash off and crumple in mid stride. The only shot I’ve seen that almost always drops them in their tracks is smack in the middle of the chest, head on. More often than not, you’ll get the heart and both lungs. This drops the blood pressure to nothing, which in turn takes the oxygen out of the brain, and down they go.

There is no cartridge or bullet that guarantees instant kills. For years I hunted in South Carolina where you can shoot lots and lots of deer. I think the smallest cartridge I used was the .257 Roberts and the biggest was the 7mm Weatherby Magnum, with lots in between, and I could see no difference in anything. One killed about like another.

The important thing is, you always assume you hit it, and you always track to the bitter end. It’s common to find no blood where the animal stood, or only a drop or two. You get down on your hands and knees and crawl. Wayne Van Zwoll once shot a buck in Alabama, and stayed on the track for a day and a half, going over the ground inch by inch, until he finally found the deer. That’s what you’re obliged to do. I’ve even seen shot deer tracked with the aid of GPS. You get a bunch of people, use the device to split the country into sections, and each tracker takes a section.

Don’t leave it for the coyotes. The coyotes don’t deserve it.