Davey Stuckey watched a huge non-typical deer jump from 150 to almost 230 inches in two years. Last archery season, he finally got a chance to take the giant buck 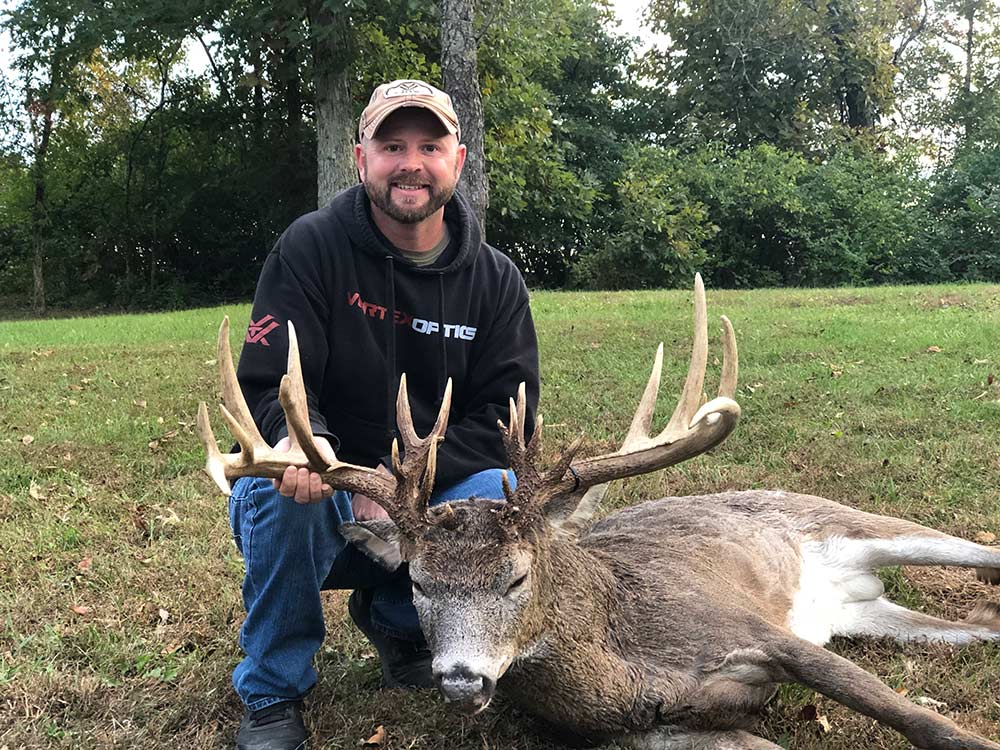 It’s no secret that Ohio is home to some whopper whitetails, particularly when it comes to monster non-typicals. Since 2010, Buckeye State deer hunters have entered 83 non-typs netting over 200 inches into the B&C record book, and Ohio leads the nation in that category. Davey Stuckey, a diehard whitetailer who’s been chasing mature whitetails in the Buckeye State for most of his life, added his own giant non-typical to the list during the 2018 Ohio archery season.

Stuckey first encountered the deer during the 2016 season, when he captured him on trail camera. “I figured he was a 3-½-year-old that year,” Stuckey says. “He was a solid 150-class buck, but there were bigger deer around that I was focused on.”

Many experts feel that if a buck has the potential to make a big jump, it will occur between the ages of 3½ and 4½, and that’s just what happened with Stuckey’s buck. “By the fall of 2017, he’d gone from a 150-class dandy to a buck I figured would score in the 180s,” Stuckey says. “And one side got really funky. The next spring I picked up one of his sheds, which measured 84 inches. It looked like he’d broken off about 6 inches from that side.”

While the buck took a major jump from 2016-2017 he positively exploded in the summer of 2018, increasing width and mass and adding a bunch of sticker points on his brow tines. “I knew then that this was probably the biggest whitetail I’d ever have the chance to hunt,” Stuckey says. “My son Gaige was talking about the biggest sharks one day, and mentioned Megalodon. Since this was the biggest deer in the area I hunt, that became his nickname.”

Stuckey wasn’t sure of the buck’s core area until one day last summer. “I was in a bean field on the farm I hunt, and I jumped him one evening,” he says. “When he saw me, he ran back to a little patch of woods, and I thought maybe that’s where he lived. So, I put a camera out and immediately started getting pictures.”

The part of Ohio that Stuckey hunts is largely agricultural, with only small patches of timber and brush to hide a whitetail. “This farm was just over 200 acres, with 180 acres tillable,” he says. “That summer the fields were all in soybeans, and the buck was feeding in them pretty regularly.”

Although the buck didn’t mind feeding with other deer, he seemed to bed alone on a very small piece of the farm. “He fed in the beans a lot with 12 to 15 does and a smaller buck. But his core area was pretty tiny. For the most part, I don’t think he left a 400-500 square-meter patch for most of the summer and fall.”

The only exception, Stuckey learned, was on rainy days. “For some reason when it rained, he’d jump across the road to a farm that had standing corn,” he says. “He’d hang out there for a couple of days, and as soon as the weather straightened out, he’d come right back home again.”

As the summer turned to fall, Stuckey became more and more familiar with the buck’s routines. “I actually set up an observation blind so I could glass him and not get busted. I not only had those observations, but also my trail camera, which was getting hundreds of pics.”

Stuckey is a retired Army veteran, so he has plenty of time to hunt. “When the season opened on October 1, I started hunting Megalodon, and I only missed a couple of days until I killed him,” Stuckey says. “I was seeing him from a distance now and then, and felt like I had to get a stand closer to his bedding area. On October 15, we had a big storm front come in, so instead of hunting, I used the conditions to sneak in and hang a stand in a pinch point near his bedding area.”

On October 20, the farmer combined the bean field where Megalodon had been feeding, and Stuckey was in the stand that afternoon, thinking the buck might move into the newly-picked field. “I was feeling pretty optimistic, but in late afternoon a big front came blowing in, and the high winds were making me a little nervous to be in the stand,” he says. “So I bailed right before prime time. The next day I checked the camera, and Megalodon had walked right by my tree, only four minutes after I left.”

Two days later, Stuckey was in the same stand when Megalodon made another daylight move. “I hadn’t been sitting long when I heard a deep grunt about 60 yards off,” Stuckey says. “And then I saw Megalodon, badgering a small doe. When that doe ran off, he looked over and spotted a couple does near my stand. He just turned toward them and walked slowly in. I was at full draw when he stopped at 13 yards. I saw my arrow bury in him, and he ran off into the field and stood there for a few minutes. I kept thinking he’d go down, but finally he got some strength and walked off, toward his bedding area.”

Stuckey knew he had excellent penetration, but feared his hit was slightly far back, so he waited for 13 hours before he returned to search for the buck. “I had two friends and a dog, and the dog tracked the buck right to his first bed,” Stuckey says. “Unfortunately, the buck wasn’t there. It took some serious searching, but I finally found him, lying dead in a creek. I’d probably walked by him three times without seeing him until I finally got on the other side of the creek and had a different view.”

Though he’d seen thousands of pictures, getting his hands on Megalodon’s rack was even better than Stuckey had imagined. “He was just a monster, with 43 inches of mass measurements, 24 scorable points, and a 26-⅛-inch inside spread. He also had 47 inches of abnormal points.” Stuckey’s giant grossed 229⅜ inches and netted 221-4/8 inches.