Does it Work? Ozone Scent Control vs. Drug-Sniffing Dog

Can you hide your scent from deer with the right gear or a careful shower? 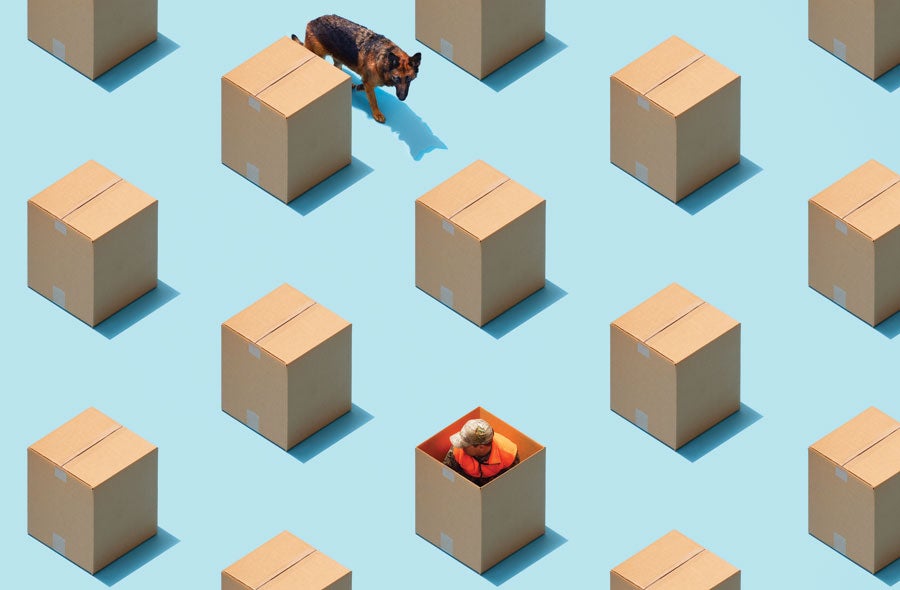 You’ve had your head in the clouds if you’ve missed the de-scents-itizing hype of companies selling ozone-generating products. Ozone, they claim, contains an extra oxygen molecule that attaches itself to other molecules—say, b.o. molecules—and changes their structure. I’m eager to examine any deer hunting trend and, if necessary, flip it on its head. So I enlisted Chance, a highly trained police dog, to test ozone’s effectiveness. I’ve watched Chance’s nose zip through every sort of no-scent solution and was fully prepared for an ozone rout. But that’s not exactly what I got.

As a refresher: Our scent tests* are set up just like the training exercises used by K-9 officers. In the box test, police dogs are taught to find a “bad guy” hiding in one of six square boxes, spaced evenly across a large field. First, I sat in each box for a full minute, leaving behind a trace of human scent. Then it was up to Chance to find the member of my test team (hunting buddies Bob Borowiak, Tony Houdek, and Tom VanDoorn; and my father, Marv) who had climbed into one of the boxes. To start each trial, the handler took Chance off the leash, then ordered: “Find him!” At this command, I started my stopwatch and timed how long it took Chance to bust the hunter.

Setup As a control test, Houdek jumped in a box, wearing street clothes.

Result Chance barked at his box after only 14 seconds.

Analysis Dogs performing this drill are marked down if they bark at the wrong box, so it’s not unusual for them to check every one—even if they get a strong whiff at one of the first. Chance’s head snapped around as soon as he passed Houdek’s box, but he checked every box before racing back. Had he reacted immediately to that first scent (as a whitetail would have), Chance could have cut this time in half.

Setup To assess how a classic scent-control method would fare, ­VanDoorn, an expert whitetail hunter who swears by baking soda, took a shower in no-scent soap mixed with soda and then dressed in clothes washed in a similar combination, plus powdered with soda. He then rubbed more of it in his hair, on his socks, and in his boots.

Analysis Chance showed no noticeable reaction the first time he ran past VanDoorn, and he checked all six boxes. Even though VanDoorn’s trusted in-the-field system cheated Chance’s nose for a few extra seconds, the difference wasn’t pronounced. I was a little surprised by this, given ­VanDoorn’s success at fooling deer—but not as surprised as VanDoorn.

Setup Before the test, my dad took a no-scent shower and placed a ScentPurge 50, an ozone-generating unit designed to infuse clothing with ozone (whitetailr.com), into a plastic tub that held his hat, boots, and two layers of camo clothing for 30 minutes. Dad dressed in these treated clothes just before entering the box.

Analysis The dog ran the entire course twice before marking Dad’s location. Though he did a slight head bob toward the correct box on the first lap, it was clear that the smell of ozone was confusing Chance. This was one of the most dramatic delays of Chance’s success in all the years we’ve conducted these tests.

Setup Borowiak took a no-scent shower and dressed in hunting clothes that he’d washed in no-scent soap. He carried an Ozonics unit ­(ozonics ­hunting. com) meant for mounting near a treestand or in a blind, ran it for a minute inside the box before the test began, and left it on throughout.

Even the handler was stunned at how long it took Chance to find Bob. Again, the dog ran two full laps before choosing the right box, and his first bark was tentative—like a guess. This was the most shocking result in four years of testing. We’d put Borowiak’s other no-scent regimens under Chance’s scrutiny before, and the dog had found Bob almost immediately. Yet the addition of ozone confused that nose for nearly one minute, which amazed everyone.

Nothing—not even ozone—will completely cover human odor. But if you can muddy the olfactory water for 50 seconds, that’s plenty of time for you to get a shot at a monster buck.

Use Baking Soda to Mask Your Scent

“Baking soda, the same stuff that deodorizes the fridge, is the key to my scent-control system,” says Wisconsin’s Tom VanDoorn, who’s taken more than a dozen Pope and Young bucks. Here’s his routine:

“The stuff can rub your skin raw if you use it straight,” cautions VanDoorn. “So mix a few tablespoons with some liquid no-scent soap. When I used to shower with straight unscented soap, I could always smell a little odor when I was finished. I can’t smell a thing when I mix in baking soda.”

Use Baking Soda in Layers

“Use baking soda like any other powdered detergent to wash your clothes. Dry them, lay a few items in a plastic tote, sprinkle a layer of soda on that, put in another layer of clothing, sprinkle more soda, and so on until the tote is full. Then place an open box of baking soda in with the clothes and seal the tote up.”

Mask the Scent on Your Hunting Boots

“Obviously, your feet are one of the smelliest body parts because they’re constantly sweating inside your boots,” VanDoorn says. “If my boots are wet with perspiration after a hunt, I put them on a boot dryer and then sprinkle in some baking soda. I’ve had very few deer cut my tracks since I started doing this.”

Save Money on Your Scent Control System

“This is by far the most effective routine I’ve used, and it’s cheap. I can get a big box at Wal-Mart for less than two bucks. Knocking back my scent for $15 a year makes me a happy guy.”