The perils of pups in the field 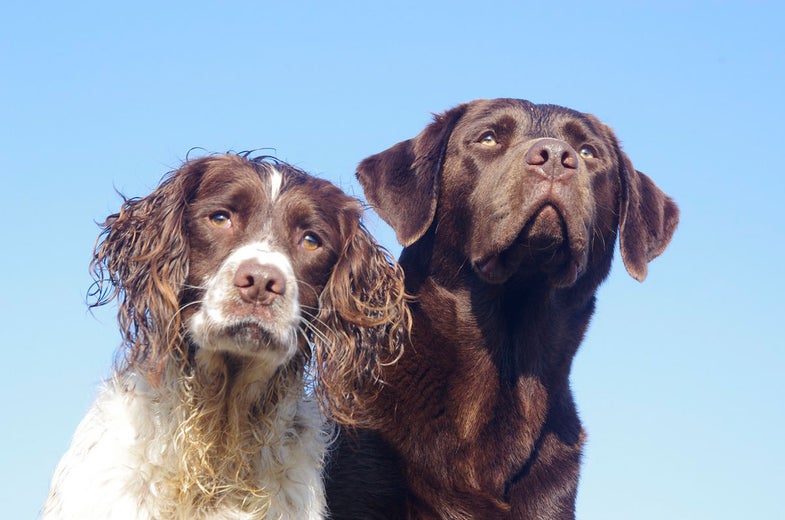 Dogs can add a lot to a hunt—including an element of the unknown. Paul Wordingham via Flickr
SHARE

About once a year, somewhere in the United States, a dog steps on a gun and shoots somebody. The most notorious case occurred when a Lab named someone had prophetically named “Trigger” stepped on a gun in Indiana a couple of years ago, shooting a young woman in the foot during a waterfowl hunt.

Most recently, it happened here in Iowa a few days ago, when, as reported in the Des Moines Register, William Rancourt of Lebanon, N.H., was shot by a dog stepping on a loaded gun. According to the story, the gun, with the safety off, had been laid on the ground by a member of his hunting party. Rancourt was hit in the back at a distance of 22 yards. I am having a little trouble understanding how the dog managed to elevate the barrel far enough to shoot a man in the back, but that’s apparently what happened.

Fortunately, Rancourt remained alert and able to walk after the shooting, but his day was pretty thoroughly ruined. I do understand how a dog’s claw could pull a trigger, and I wouldn’t be surprised if a dog couldn’t step on a safety, releasing it, and pull a trigger at the same time. Putting a gun on safe is no guarantee that it can’t be made to go off.

Dogs, and I love dogs, are totally random actors, idiots, and agents of chaos who should not be unrestrained around destructive devices.* I never drive dogs anywhere without putting them in a travel crate, for their safety and my own, because who wants a dog jumping into the driver’s seat with you at 60 miles per hour. They need to be kept away from sporting goods of almost all kinds, a painful lesson I learned when I was quite young.** I had taken my fly rod and our springer spaniel, Bix, up to the pond. Before long, I had both of us tangled up. The fly was stuck in my thumb, and Bix was wrapped up in a harness of line. The harder he pulled to get free, and he was a strong chunk of a dog, the deeper it drove the hook into my thumb.

The easy way to avoid being shot by a dog is, of course, to unload your gun when you put it down or cross a fence, yet many people can’t figure that out. The main reason I prefer break-action guns for upland hunting is the ease with which I can open the gun to render it totally safe. You flip the barrels open, dump the shells into your hand, and it’s harmless, except as a club. And with Beretta and Benelli semiautos that have bolt-stop buttons, you can take the shell from the chamber without cycling the next round, which makes them almost as easy to keep safe as a break-action gun.

As for laying guns on the ground, I don’t if I can help it. I was recently observing a hunter-ed class when the instructor said, “My guns are tools, and I don’t care if they get banged up, so when I cross a fence I unload my gun and lay it on the ground.” That’s totally safe, of course, but my guns are tools, too—they just happen to be tools with walnut stocks and engraved receivers that I would prefer not to beat up unnecessarily. Having suffered a dog-nail mark in one of them, I will usually unload my gun, then find a safe and secure place to lean it if I want to cross a fence or take a break. There is no guarantee a dog won’t find it and knock it over, but the odds are better if it’s standing up, not lying on the ground.

**I learned it again in my 20s, with a border collie and cross country skis. When a stock dog wants to herd your ski tips as you hurtle downhill, no good comes of it.